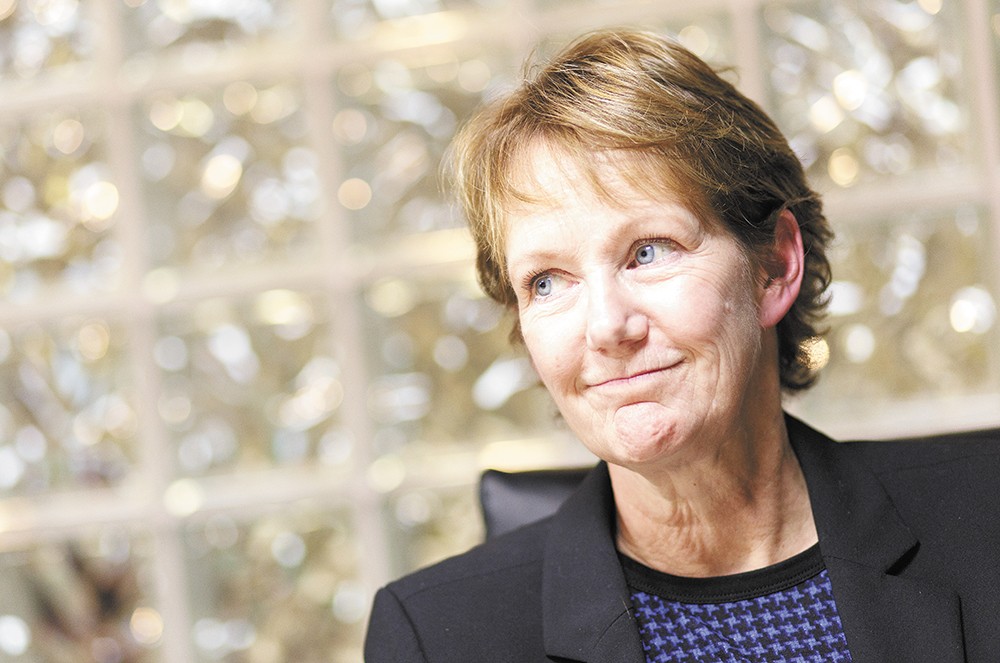 ordered from Amazon.com. Cases of bottled water. Cheez-It snack crackers. A dinner at P.F. Chang's. Lots of Jimmy John's sandwiches and a fancy meal out at the upscale Spokane Club.

This is a sampling of the nearly $2,000 worth of food that planning department staff ate while conducting official business and charged to the city last year. It may be a small amount of money when compared to the overall budget of city government, but the way city employees are being fed has attracted particular scrutiny recently, with Jan Quintrall, division director of Business and Developer Services, resigning after it was revealed she had several lavish meals at the Spokane Club with staff that she charged to taxpayers.

Meals like this have spurred one member of city council to introduce an ordinance meant to place tighter controls on how much city employees can charge the public for food, which she says has gotten out of hand.

"I've worked for three mayors and I've never seen this happen," says Councilwoman Karen Stratton. "This is the first time it's come up as frequently as I can remember."

Stratton's ordinance, which is still being revised, would set a per diem rate, or a daily allowed expense for necessities, on what city employees can charge for meals related to city business. The details of how that rate would pencil out are being worked out, but members of the city council are already subject to a per diem when traveling on city business.

The rate is set depending on how expensive the city is that they're traveling to. For instance, a city councilmember could charge the city $29 for dinner while lobbying for an issue in Washington, D.C., but only $22 if they were in Lewiston, Idaho, says Council President Ben Stuckart. If they go over that amount, it's on them.

It's not uncommon for employers, both private and public, to pick up the tabs for workers who have to stay late or sit through a long meeting. But Stratton says that some members of Mayor David Condon's administration have taken it too far.

In November, Quintrall spent $400 on lunch

and coffee at the Spokane Club, an organization known for its relatively affluent membership, for a team-building exercise. In April, she billed the city $168.44 for a "Street Strategy Leadership Group lunch" at the Spokane Club. Later in August, Quintrall spent another $180.71 at the Spokane Club for a meeting with a "neighborhood plan group" where she and six others dined on tuna tartare, Kobe steak, goat cheese ravioli and other fine foods.

City spokesman Brian Coddington says that because Quintrall's meals were directly related to city business, she committed no wrongdoing.

He also points out that the $400 lunch at the Spokane Club included three gallons of coffee and one gallon of hot water for tea to be used throughout the day. According to Coddington, the administration does not have plans to change any policies on spending money on meals.

Under the current policy, employees can be reimbursed for "meals incurred in the necessary discharge of the employee's official duties," including all-day meetings and while traveling. Meals at meetings that are primarily social are not eligible for reimbursement under the policy; nor is alcohol.

Stratton says she's not sure how widespread it is for city employees to charge meals to the city, but she she suspects that the division of Business and Developer Services, which routinely interacts with private businesses, is particularly troublesome. She says that many in the Condon administration have a private-sector mentality that makes them comfortable with spending money on food in the course of business.

Stuckart adds that it might make sense for city employees to conduct business at the Spokane Club because it has private meeting space, but they should adhere to a per diem rate.

"So you probably shouldn't be having tuna tartare or steak tartare," says Stuckart, referencing one of the controversial meal choices Quintrall charged to the city. "You should be having a sandwich."

Stuckart says that the council will order pizza before meetings, but they pay for it out of their own pockets. If someone in the office has a birthday, he says, they pool money for the cake.

One of the problems Quintrall had with Scott Chesney

, the planning director she drew controversy for firing, was the regular staff lunches he charged to the city. When it was revealed that Quintrall spent more than $400 on coffee and food at the Spokane Club, she was criticized for being hypocritical.

Records obtained by the Inlander show that the city's planning department, which Chesney headed, regularly used public money to pay for meals and snacks.

During 2014, the planning department ordered Jimmy John's sandwiches 10 times. They also ate meals at Chairs Public House and Great Harvest Bread Co. during a bus tour involving the city's comprehensive plan that included both city staff and outsiders. In April, another $80 meal for four people at the Spokane Club was charged to the city for a planning and development retreat. There also are plenty of snacks and bottled water for meetings.

Coddington says any controversy involving Quintrall and her spending habits should be considered closed because she has resigned.

"But in one sense, nothing has changed," he says. "We are cognizant of spending money wisely, whether it be a street, a park or a lunch meeting. It's a good reminder that we need to check and double-check our expenditures," he adds. ♦