Authentic big-city street food from a truck on Sunset Highway. Plus, blue-plate specials in CdA. 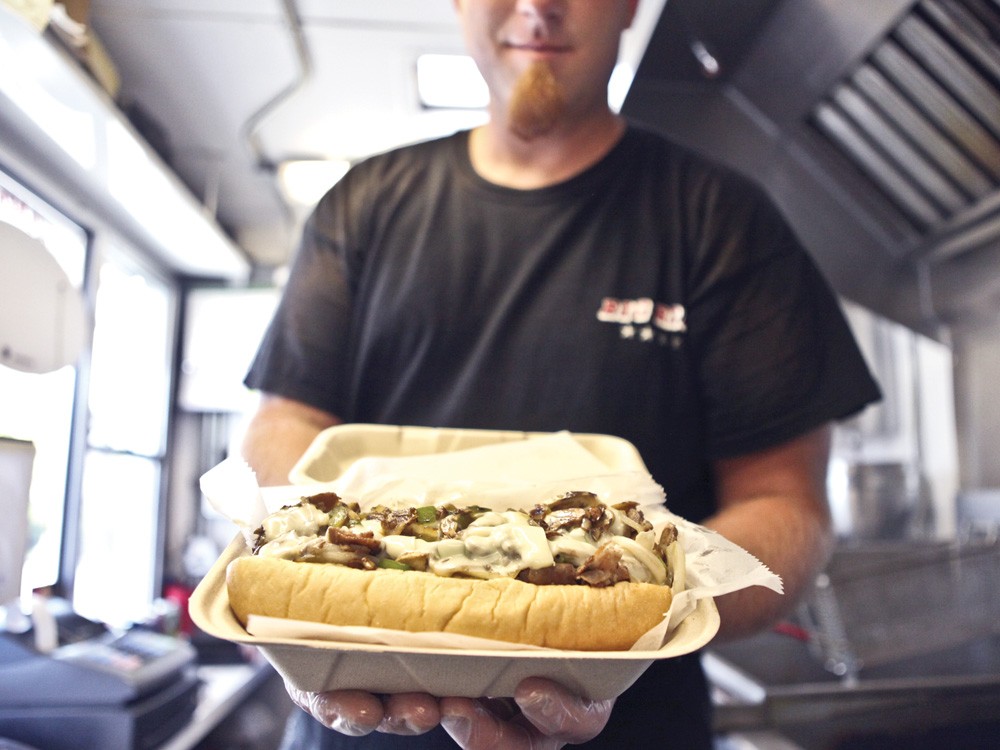 It's 90-something degrees outside, and Curtis Bytnar is crouched inside the metal food truck that is home to his hot-dog business, Big Red's, but despite the temperature and the fact that he’s just inches from a hot grill and a bubbling deep fryer, Bytnar has a huge grin on his face. This is exactly where he wants to be.

The truck is a far cry from where Bytnar has spent most of his culinary career. After completing school, Bytnar worked his way up to the positions of sous chef at C.I. Shenanigans, executive chef at the Wolf Lodge Steakhouse in Coeur d’Alene, and one of only three chefs at the Davenport Hotel. But after several years as a relative higher-up in the local culinary industry, Bytnar decided he had had enough of the intense culture.

“I’m not a competitive person,” says Bytnar. “I don’t feel like I’ve got to do any talking. I’ll let my food do the talking. I let it speak for itself, because I feel like it can.”

Bytnar grew up in Chicago, around what he calls a “melting pot” of cultures that have produced food that he calls “just out of this world.” But upon moving to Spokane, Bytnar discovered that the Inland Northwest lacked the kind of food he had grown accustomed to back home. So he decided to just make it himself.

Despite the small space inside his truck on Spokane’s far-west side, Bytnar has a vast menu, consisting of hot dogs, specialty sandwiches, and fries, with nothing more expensive than $8. He says he orders his dogs from Chicago and his special buns from Philadelphia, using those as the basis for both classic items and more creative takes, like the bacon-wrapped dog ($6), which is topped with caramelized onions, cream cheese, barbecue sauce and, of course, bacon.

But Bytnar also shines when it comes to fries.

His garlic fries ($4.50) are made with tons of minced garlic and parsley.

It’s hard to find something that doesn’t sound good on the menu, which has vegetarian options as well. But it’s Bytnar’s obvious passion for what he does that makes Big Red’s more than just a juicy hotdog stand.

“Pride, passion and love — those are the three things you have to have to succeed,” says Bytnar. (Tiffany Harms)

Americana on a Plate

Rising gas prices may have curtailed our tradition of Sunday drives, but breakfast out is still an affordable treat at Jonesy's Family Restaurant. The interior has changed several times since Sambo’s occupied the same spot in the ’50s, yet Jonesy’s channels some of that classic diner vibe — homey, fast-paced, a never-ending cup of coffee, booths and counter seating looking out on Coeur d’Alene’s tree-lined Sherman Avenue area.

Operated by Tim and Erica Mitchell, who also own Mangia Catering and formerly ran Mangia in both Spokane and Post Falls, Jonesy’s offers breakfast well under $10 for hearty eaters. Dad’s Giant Breakfast Burritos are portions your pops will approve of: three eggs, meat (bacon, chorizo or a combination of bacon, sausage and ham), potatoes, cheese ($6). We liked the scrambles, especially the veggie, with peppers, onions, mushrooms, spinach, tomatoes and feta ($6.50). For carb-loaders, there’s the Jax Wagon — one buttered biscuit, gravy, two bacon or sausage, and a half-order of potatoes ($7).

A few lunch menu items scrape the $10 ceiling — steak with mashed potatoes and a side, the third-pound Nae Nae burger, with avocado, bacon and cheddar — and a few salmon dishes sneak over the mark. Otherwise, expect the same reasonable prices and generous portions as breakfast in classics like spaghetti and meatballs, fish and chips, and oven-roasted turkey ($7-$9).

More classic diner fare includes tuna melts ($7.50), a club sandwich ($7.50), and burgers with a side of fries, tater tots, potato/pasta/green salad, or soup ($6-$10). Sometimes there’s a twist, like avocado on the BLT ($8) or the balsamic reduction on the ribeye cheese steak sandwich with caramelized onions ($9). Add burgers, salads, homemade soup and occasional specials.