Last week, a popular, national fast-food chain serving fried chicken (Chick-fil-A, for those not in the know) opened in North Spokane. Customers lined up for blocks in their cars, waiting hours to place an order.

It prompts one to wonder: What if this was the kind of reaction folks had each time an independently owned, local restaurant opened?

With Washington state's pandemic-prompted dine-in ban lasting at least until Dec. 14, it goes without saying that local restaurants could use even a fraction of this level of support.

Thus, a few Inlander staff members penned odes to a handful of our favorite chicken sandos on menus around the region. We've also added a list of spots with fried chicken just as worthy, among them many that will deliver it right to your door, or have it ready for pickup within minutes, hot and fresh from the fryer.

I'd just started high school in the mid-'80s when I first encountered Chick-fil-A. It was one of the few food options in my town's mall, and the only reason we ever went there instead of grabbing pizza was because some friends liked the waffle fries. The chicken sandwich? Pretty run of the mill. Nothing to make it stand out from a KFC or Popeye's, certainly. Worth sitting in a drive-thru line for hours? Definitely not — and yes, I've tried one since that long-ago mall shop. 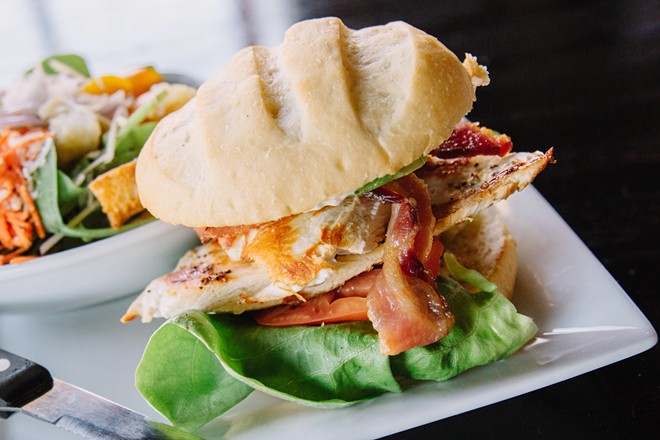 Jennifer DeBarros
Not fried chicken, but still crispy and tasty.

Know what has changed? The quality of Spokane's restaurant scene the past decade or so, and there are plenty of places offering damn fine fried chicken sandwiches, all without your money going to a company based in Georgia with a long history of anti-LGBTQ donations.

One of my favorites is from Cascadia Public House. Their crispy chicken sandwich, like most of their menu, leans on remarkably fresh produce (butter lettuce, tomato) as well as thick Montana-raised bacon, a spicy aioli and pepperjack cheese to give its thick, juicy organic chicken breast a boost toward greatness. Put it on the locally made Alpine Bakery bun, and you're there. It's served with fries, fruit or a salad. (DAN NAILEN)

In some ways, Lucky You's delicious crispy chicken sandwich is remarkably similar to Chick-fil-A's signature menu item. It looks simple, just a fried chicken breast with some spiced mayo, lettuce and pickles (the CfA version is just pickles on a buttered bun). But Lucky You's transcends its simple approach, with the flavors of that spiced mayo bringing out the best in the chicken breast. The first time I ordered it, it was one of those panic orders when I just couldn't decide and went with something I considered a "safe bet." I've ordered the Lucky You chicken sandwich many times since and never been disappointed. It's served with a side of chili, soup, salad or fries. For vegans, there's a meatless version, too. You'll have to wait a bit to get into either, though, as Lucky You recently announced they were ceasing doing takeout for the immediate future. (DN)

Chicken-N-More's menu features a wide selection of Southern food options, from chicken dinners to ribs and catfish. But I have to be honest: Every time I go, I order one thing, and one thing only, the Tiger Double Chicken Patty. There's not much to it. It's two chicken patties inside a hoagie and drizzled with barbecue sauce. Add some hot sauce, have some hand wipes ready and dig in. Not only is it delicious, but at just $5.09, it's a cheap way to stuff yourself. You may find yourself coming back again and again for more, just like I have since high school.

The Tiger is an homage to Lewis and Clark High School's mascot, and it's long been a go-to choice for lucky teenagers who go to school just blocks from Chicken-N-More. I was one of those students more than a decade ago. At lunch — back when LC had no cafeteria — my options were either to go to one of the nearby fast food restaurants for a chicken sandwich, getting back just in time for fourth period, or walking a little longer to Chicken-N-More and paying about the same for a better sandwich. On Fridays, I'd choose the latter. Was I sometimes late for fourth period? Yes. Do I have any regrets? Absolutely not. And neither will you if you opt for this chicken sandwich and skip the drive-thru. (WILSON CRISCIONE)

In the depths of the pandemic, when my cupboards run bare, when I'm too hungry to cook, The Elk hears my voice on the other end of the phone once again, with the same old story: "Santa Fe Chicken, with a side of corn pasta." The chicken breast is breaded just enough to complement the chicken but not distract from it. And it's topped with creamy melted Monterey Jack, roasted poblano peppers and honey cream cheese that bumps the sandwich up from mere "delicious" to "hedonism." And every time, in those brief moments between when I pop open the to-go box and scarf down the sandwich, I forget this flawed world, with its misery and its loneliness and its politics and virus and death and grief. Quiet, I say. I'm eating here. There is a void inside me, but one that can be filled, if oh-so-temporarily, by a damn good chicken sandwich. I swear, I do believe in variety, in expanding my palate, in trying new things, in not being so predictable. But with a sandwich that tasty on the menu, does it really make sense to ever order anything else? (DANIEL WALTERS)

While I'll be the first to (blasphemously) admit here that fried chicken is usually not my first pick on most menus, it is top of the list at Hogwash Whiskey Den. Chef CJ Callahan's The Jamboni is a tasty classic with a twist: buttermilk-soaked fried chicken topped with ham, Swiss, honey mustard, house pickles and white barbecue sauce. The Swiss melts into all those tiny, crispy crevices of the fried chicken, and layers of salty ham push this creation over the top. According to legend, Callahan was inspired by a similar sandwich once tasted at a truck stop. We hope the Jamboni never departs the menu, but knowing it's a consistent bestseller gives us confidence it won't. Fried chicken in other forms grace Hogwash's menu, including the "Chick Korea" sandwich ($16), a version with American cheese, housemade kimchi and togarashi aioli. When weekend brunch service is offered, you can also bet on the classic chicken and waffles and Callahan's own twist on the Jamboni when it takes a biscuit form, topped with fried eggs for just a buck more. (CHEY SCOTT) ♦