We went in search of different ways to enjoy your chili 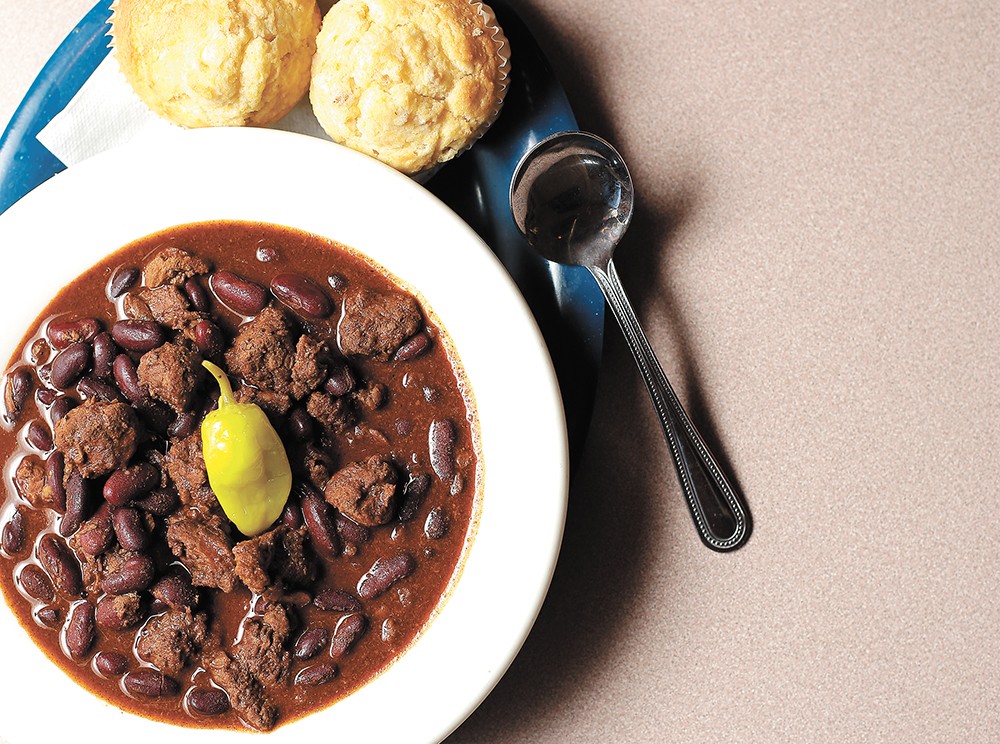 We could find no state or local statute preventing the serving of chili during the warmer months, but this spicy stuff typically only gets respect come fall and winter. As we begin to hanker for a bowl of chili during these short and chilly days, our staff went out looking at how local restaurants use chili on their menu. Here are our findings.

I've been told for years that Longhorn Barbecue does an amazing chili. The problem is that when you get a look at the Longhorn menu, or spy their legendary barbecue buffet upon entering, it's hard to settle for a bowl of chili when ribs, sausages or pulled pork are calling your name. But hold that temptation at bay, go for the Texas Red Chili at Longhorn, and you'll have no regrets. You'll be pleased by sizable chunks of slow-cooked steak in the mix, so you won't go totally meatless for your visit. It's very much a Texas-style chili in terms of the spice profile, but there are kidney beans to be found. It has a bit of a kick, but probably not enough for the folks who like to sweat a few bites into their bowl. My server offered up some hot sauce, so they're ready to spice you up if needed. In all, it's a hearty chili, and a bowl of it is a perfect lunch proportion.

Digestive stress: None to report, but my gut has been stretched and fortified since taking a job that pays you to eat, so take that into account. (MIKE BOOKEY)

You know the perfect way to top this Gonzaga-area favorite's freshly hand-pressed, 100 percent beef hamburger? More beef, in the form of Wolffy's tasty Texas-style chili. Wolffy's has a classic vibe, and customers belly up to the lunch counter to select from an array of burgers, hot dogs, flavored sodas and old-fashioned handmade milkshakes. The Chili Cheeseburger, delivered as a single quarter-pounder or a half-pound double, comes with the perfect-sized dollop of the slightly spicy concoction, meaning you can still pick up the burger without risking bun disintegration or chili dropping on your shirt. There is also an open-face version slathered in cheddar along with a supersized dose of chili, requiring a knife and fork, but I get my extra spice via a side of chili cheese fries or a simple cup of chili, topped with cheddar and onion if you like. Until recently you could stop in for breakfast and get a Texas Chili and Cheddar omelet or a "Cincinnati Slinger" (pile of hash browns topped with chili, hamburger, cheese, onions and eggs), but breakfast is moving to the new Wolffy's location, opening in Airway Heights in a few weeks, and is no longer available at the Logan neighborhood original.

Digestive stress: All good in the intestinal 'hood. (DAN NAILEN)

ON A HOT DOG (OR BURGER)

Chili in a bowl is basic and boring. Chili smothering a juicy, salty hot dog is next-level stuff. It's both casual and adventurous, while also filling and nostalgic. Remember when you were a kid and more than happy (it's OK if you feel this way as an adult, too) to eat chili dogs for dinner, like, twice a week? But this grown-up version of Oscar Meyer wieners coated with greasy Nalley's from a can doesn't compare. First, it's three times larger, and tastes 10 times better. Waddell's hearty house chili is spicy, earthy and perfectly textured, with finely ground beef offering a perfect contrast to the red beans and sauce, smothered in cheese. If you can't handle a massive hot dog drenched with this chili, go ahead and get it in a bowl — they let you do that, too. Also, if you're even crazier about chili dogs than most, you can up your game and get this savory slop on top of a burger, which is only something that true chili dog aficionados (I'm in a relationship with one) can handle. It's definitely next-next-level chili tech.

Digestive stress: You should definitely take some antacids when you get home, and maybe plan on an afternoon/evening of couch lounging and/or Netflix binging. (CHEY SCOTT)

Long known for their teriyaki and pulled meat dishes, the local Aloha Island Grill brings breezy Hawaiian cuisine to the mainland, including their version of chili — which, be aware, is only available on Mondays. What sets this chili apart is its inclusion of Portuguese sausage, which is so prevalent in Hawaii that McDonald's often includes it on their breakfast menu. Aloha's hearty recipe features the smoky and garlicky sausage, cut thin like pepperoni, combined with the usual chili staples that bring on bursts of sweet and salty flavors. Served over rice, the juicy dish becomes almost creamy, and a small bowl keeps you well satiated until dinner. Feel free to take the chili to the next level with your prefered heat level, using their house Lava Sauce.

Digestive stress: Compared to so many chilis, this is a solid choice. (LAURA JOHNSON) ♦