Surrender to craving for fine chocolate in all its forms 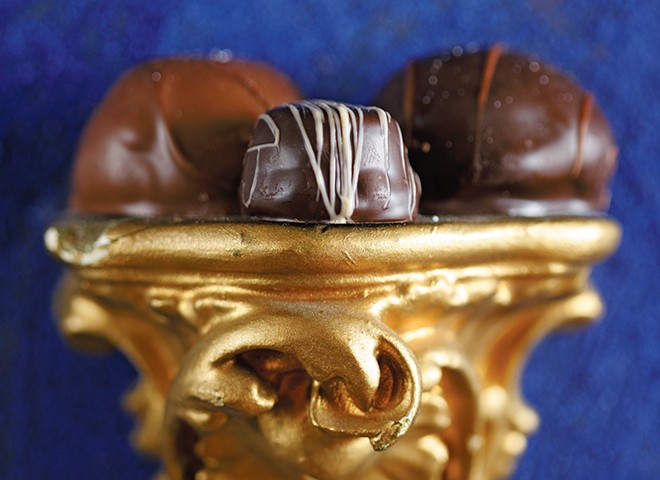 Picture decadence, and it's surely chocolate-dipped. Does it even need to be said? Do you really need any convincing that chocolate holds a special place in the universe of indulgences? You can enjoy a cheesecake or admire a crème brûlée, but it's chocolate that inspires a craving. Chocolate lovers will be unsurprised that archaeologists have unearthed traces of chocolate in ancient pottery, and the Aztec and Mayan cultures believed cacao beans had magical powers. Too often these days we get our chocolate fix by sneaking a Hershey's bar from the Halloween loot and gobbling it before anyone notices. But chocolate doesn't need to be a guilty pleasure — stop secretly unwrapping just one more fun-size Snickers and openly embrace three states of fine chocolate: solid, liquid and ganache.

First we stop at Spokandy on Third Avenue, where classic chocolates are crafted daily just like they were when the business opened a century ago as Riley's Candy Co.

"Candymaking in a hand operation like this is a dying art," owner Francis T. Riley, the son of the founder, told the Spokesman-Review when he retired in 1968. "That durable stuff from the big factories doesn't quite have the taste we can get."

Good thing he was only partially right. Behind the glass counter, Spokandy is a dazzling array of bite-size indulgences filled with flavored buttercream, caramel and more. Those who like surprises can go for the charm of an assorted box, and traditionalists can go with the signature Murphys with whipped marshmallow centers, made just as they were in 1913. But chocolate purists can go straight for the classic dark and milk chocolates and the chocolate-filled truffles.

Next we stop at Chocolate Apothecary, which also hosts a tempting case of truffles and seasonal treats. But the specialty here is a comforting cup of drinking chocolate, which feels like the hot chocolate of childhood, but bears no resemblance to those powdery scoops — picture slivers of actual chocolate bars, melted into steamed milk. And because it's actual chocolate, the darkness ranges from white and milk chocolate to a dark chocolate that's 72 percent cacao. In Europe, there's drinking chocolate that's literally melted chocolate served in tiny cups, manager Rachel Mace-Crum says, but here they serve it as a more drinkable indulgence — something you can curl up with on a cold day. The warmth brings out the aroma of the chocolate, which goes down rich and velvety. Try the popular Spicy Maya for an extra kick, or ask the barista for a custom blend.

Finally, one more stop for the most mysterious of chocolate forms: ganache. The chocolate-and-cream concoction varies in interpretation and consistency, and it's popular as both a filling and icing between dense layers of chocolate cake. But the chocolate ganache torte at the Davenport's elegant Palm Court Grill lets the ganache be the star: Layered and sliced into a tall wedge, the torte resembles a sophisticated cake, but don't be deceived — this rich, flourless confection is made of Callebaut Belgian dark chocolate, eggs, honey and sugar, with a crushed Oreo crust and vanilla cream topping. Cake would just get in the way. It's a longtime favorite made fresh daily, says Joe Owens, the restaurant's general manager. Even the most stingy of chocolate lovers may be persuaded to share. ♦

What makes a truly fine cup of coffee? Between the grower and your cup, a lot of hands have put work into the quality of that first sip.

"There is always a story behind coffee," says Rebecca Hurlen Patano, who owns Doma Coffee Roasting Company with her husband.

The bar continues to be raised for quality coffee distributed in the Spokane area, she says.

Higher price is an indicator of care, in both the quality product and the direct relationship with farmers, but the local market is a relative bargain. Beans that retail for $14-$16 a pound in this area would go for upwards of $30 in other coffee-conscious markets like Seattle or San Francisco, Hurlen Patano says.

But the true reward of a quality cup is the experience, whether in a lively conversation with friends or an intimate connection with a loved one.

"What coffee can create is the opportunity to indulge in the moment," she says.