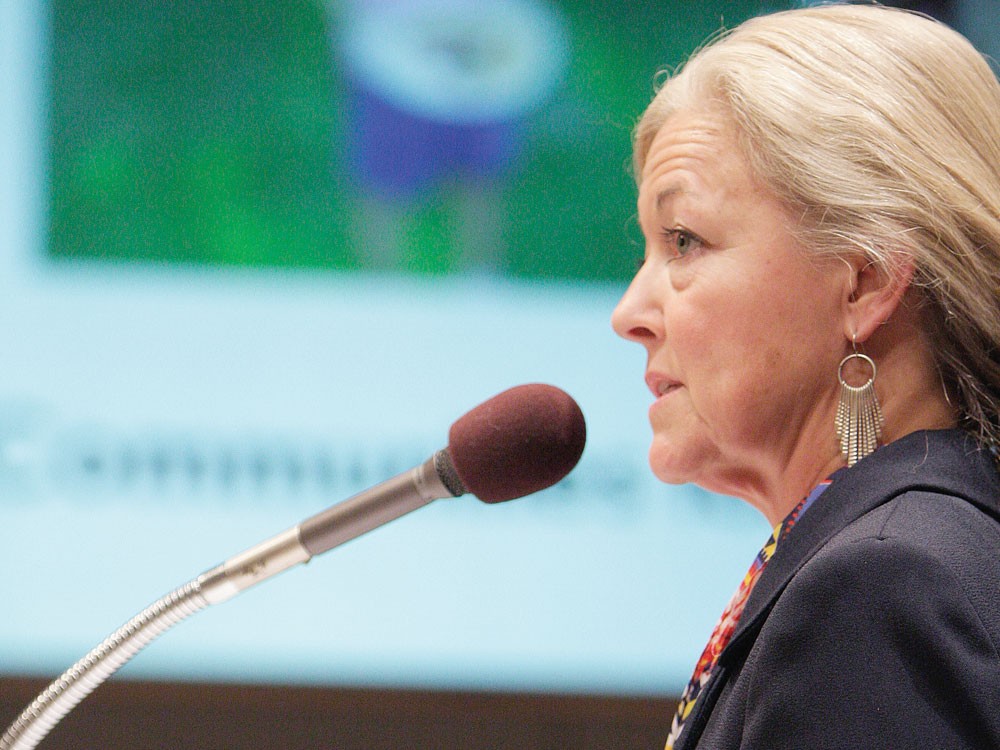 Young Kwak
Mayor Mary Verner at her State of the City address in early October.

For those of you expecting good news out of Spokane’s City Hall, keep waiting. A call for a 9 percent reduction in spending across all city agencies. More than 120 positions eliminated from the city’s payroll. Potentially shuttering library branches and fire stations.

Spokane Mayor Mary Verner will hand off her budget proposal for 2011 to the City Council this Monday for a month of public hearings.

“The context of this budget is a global recession. It’s the worst year on record for tax receipts since the Great Depression,” says Gavin Cooley, the city’s finance director. “You can lay all the economists side to side and they may all point the same direction. But I tend to trust the average Joe on this — it’s not going to go away quickly.”

For that reason, the city’s planning to make big cuts, and not just hold off for better times.

Jon Snyder, who joined the City Council just a year ago, says the complexity of the budget doesn’t allow for an easy understanding of how it works.

“The budget is so massive that just even drilling down into it is an enormous undertaking,” he says. “People say to me, ‘Why don’t we just cut everybody’s pay 10 percent?’ Well, we have eight unions. It’s not that easy.”

And, according to Cooley, the unions aren’t warming up to the mayor’s call to forgo pay raises this year, among other things. Of the eight bargaining units, Cooley expects one or two to agree to concessions. Pay and benefits represent about 80 percent of the city’s expenditures.

It’s these very same people — the city staff — that fulfill the city’s mission, which is to provide services to its citizens. “We don’t make widgets — we’re a service organization,” says Snyder.

Due to state law that doesn’t allow the mayor or council to make “unilateral” changes in the city employees’ pay and benefits, the city must bargain with unions and strike a compromise. Or slash its services.

With time short, the lopping off of government services will begin soon. The City Council must approve the budget before the end of the year.

“The cuts we’re doing now aren’t in the ‘nobody notices’ department,” Snyder says, mentioning the cuts to the Community-Oriented Policing Services program and road-striping work crew. “People will notice those. If they come back, it’s because people want them back. If somebody says, ‘Hey Jon. We really don’t miss Fire Station No. 9,’ I’ll listen to them. But I don’t expect that to happen.”

Every Monday evening in November, the Spokane City Council will hold public hearings on the 2011 budget.