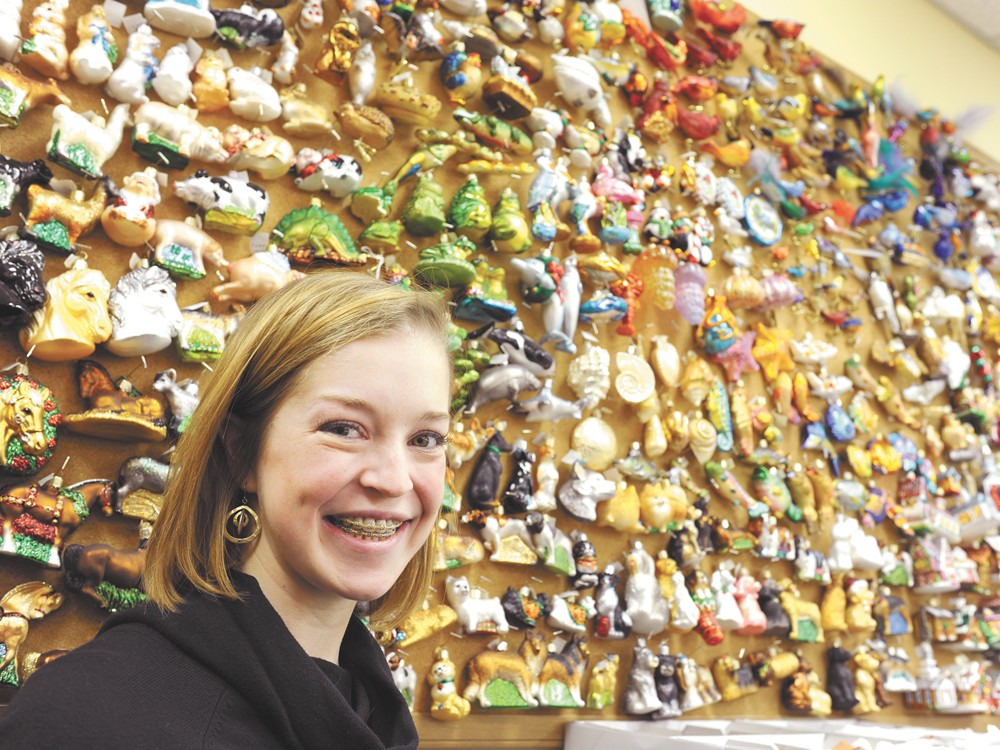 Christian Wilson
Katherine Merck of Old World Christmas with about 1,000 creations from her family’s company.

Pinned to several classroom-sized bulletin boards in a spacious office adjacent to the warehouse, the boxes’ contents are revealed: glass ornaments. More than 1,000 ornaments are tacked onto the bulletin board, and not a single one is identical. There are Santas of every shape and size, dogs of every breed, fruits and vegetables, snowmen, angels, fish, slices of pie, a baby bottle, a T-rex, donuts, the Texas state flag, a sewing machine and hot air balloons.

The glittery baubles representing nearly every hobby, interest, holiday and career imaginable sparkle in the winter afternoon light shining through a south-facing window.

It’s 20 days until Christmas, but this room in East Spokane looks like this every day — even in the relentless dry heat of July.

As Katherine Merck navigates through the sprawling headquarters of her family’s 33-year-old, Christmas-centric company, Old World Christmas, she says even though she and her parents are surrounded by all things Christmas 365 days a year, the magic of the season never loses its luster.

Merck and her family are just a few of the many people who devote their year-round livelihoods to Christmas, so the rest of us can celebrate for 30 (or increasingly more) days. An estimated $6 billion will likely be spent on holiday decorations alone this year, more than consumers have dropped in at least seven years, according to the National Retail Federation.

“I think we get more excited for Christmas when it comes, because it’s Christmas for us all year round,” the 22-year-old says with a wide smile and a sincere eagerness in her voice. “You have to have a really strong love of Christmas all year round to do this.”

While major holidays like Christmas are no doubt lucrative times of the year for retailers, Merck’s parents, Tim and Beth Merck, chose their Christmas-y career purely by chance, yet that doesn’t mean their passion is any less for the holiday steeped in tradition.

In the mid-’70s the couple began importing traditional European glass ornaments to supplement the holiday slow-down at a local antique shop they owned. People loved the ornaments, though, and thus Old World Christmas was born.

More than three decades later and the mouth-blown, hand-painted ornaments — all designed by Beth — are sold wholesale to retailers across the U.S. and collected by thousands of Christmas enthusiasts.

Inside a shop in quaint downtown Coeur d’Alene, Mary Peak echoes Katherine Merck’s sentiments on loving the Christmas holiday. Peak and her husband, Gregg, have run their year-round Christmas store on Sherman Avenue, Christmas at the Lake, for more than a decade now.

“We do 13 trees at our house. I start decorating the day after Halloween and it’s up until February,” Peak laughs. “We really love Christmas. But if you spend as much time as I do at work you have to love what you do, and we have a passion about our store.”

Christmas at the Lake is a winding maze of a dozen or more artificial trees all dripping with festive embellishments, including Old World Christmas’ glass ornaments. Each tree has a theme — sports, rustic living, camping, dogs and cats, Santas, animals and the sea — and when a customer asks Peak where a very specific Santa Claus ornament is, she knows exactly where to look.

“We call Mary ‘Mother Christmas’ because she knows everything about Christmas,” says store employee Jessica Shedd, who’s worked there for nine years. “She can even identify little broken pieces and say which ornament it came off of.”

As soon as one year’s Christmas is past, Peak begins preparing for the next — ordering new inventory that starts arriving as the rest of us are celebrating Valentine’s Day. Sometimes she even works on Christmas Day, setting things up for a sale the following day.

A collection of fragile, glistening Christmas ornaments is practically worthless without a sturdy tree to display them on, and Jim Dietz knows better than most of us that finding the perfect soft-needled canvas on which to hang ornaments is equally as important as the Christmas memories garnered over the years decorating it.

Dietz was 12 years old when his parents, Victor and Marguerite Dietz, set aside the land on their Green Bluff family farm to grow Christmas trees. It took eight more years for the first batch of trees to be ready, he adds. This year — with more than 10,000 trees growing at different stages on 15 acres — the family business turns 30 and it’s still growing.

While the Dietzes aren’t exactly surrounded by images of Santa and his sleigh every day of the off-season, the family works from March through November getting ready for the upcoming Christmas season: planting new trees, keeping weeds and insects under control and pruning the trees to just the right shape.

“Everyone has their own idea of what is the best tree,” Dietz says. “I look at each one individually and try and decide how it will look it’s best, kind of like an artist painting a picture.”

As he’s pruning away rogue fir branches in the 90-degree summer heat, Dietz’s anticipation of the coming holiday season builds. Both to see the families who come up to cut their own tree year after year, and also because it’s stressful not knowing if the farm will attract enough customers to pay the bills.

“We are only open three weeks a year,” he says. “But the time we are open is a fun time for us,” he says. “It’s rewarding to see this happiness created. We are proud of the trees we grow.”

To be involved in a venture focused on one month-long holiday a year, it might just take a certain kind of personality. Someone who’s grown up but never lost their childhood fascination with Christmas traditions like decorating the tree or counting down the days until Christmas Eve with an advent calendar.

Katherine Merck smiles as she recalls her family’s yearly tradition of hiding the Christmas pickle ornament somewhere in the house, and trying to be the first one to find it.

“I really don’t get tired of Christmas,” Merck reiterates. “It really is our most favorite — and the most wonderful — time of the year. I get so excited — I’m like a little kid.”

“We are only open three weeks a year. But the time we are open is a fun time for us,. It’s rewarding to see this happiness created. We are proud of the trees we grow.”