Had it with Rudolph? Try some offbeat holiday movies and shows 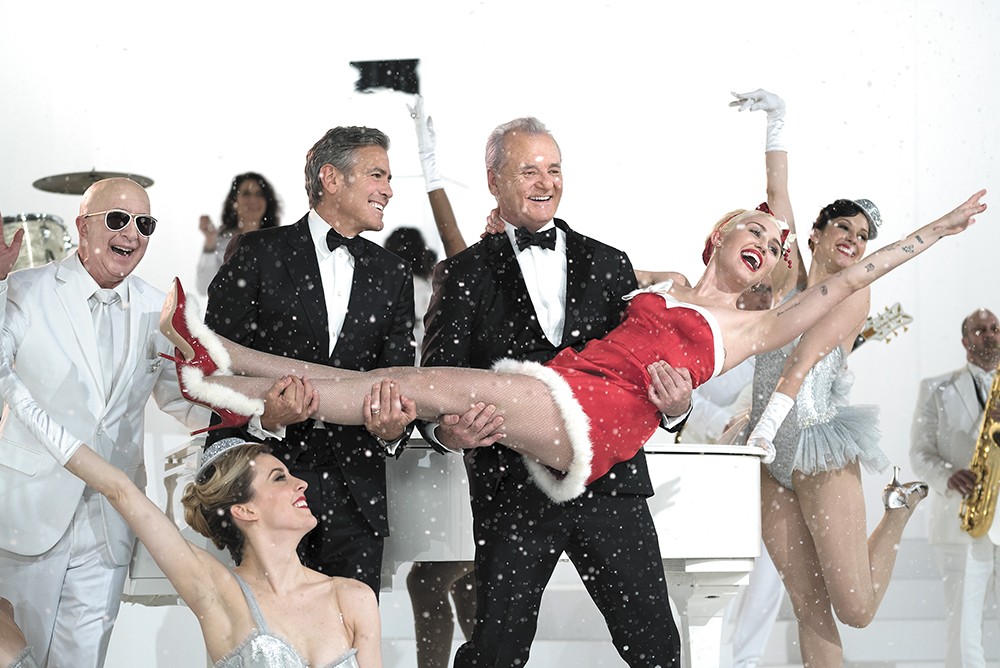 A Very Murray Christmas on Netflix offers an ideal holiday blend of entertainment.

THE SHOP AROUND THE CORNER

Ernst Lubitsch was one of the greatest comedy filmmakers of all time, a former actor-turned-director and studio head whose sense of timing and plotting was so effortless that his movies (To Be or Not to Be and Trouble in Paradise among them) were said to be blessed with the so-called "Lubitsch touch." His best films are not only prime examples of classical Hollywood filmmaking but are also way ahead of their time, and 1940's The Shop Around the Corner is no exception. Set in a Budapest boutique during the Christmas rush, it's a hilarious ensemble workplace comedy and a touching romance, with bickering, competing salespeople James Stewart and Margaret Sullavan slowly realizing they're one another's lovelorn penpal. (If that plot sounds vaguely familiar, it's because it was loosely remade in 1998 as You've Got Mail.) This is a perfect movie, funny and sweet and also a little sad, and it deserves to be placed in the rarefied ranks of classics like It's a Wonderful Life. Streaming via iTunes, Amazon and YouTube ($2.99 to rent; $9.99 to purchase). (NATHAN WEINBENDER)

How's this for a Christmas story? Santa, who lives in a sky castle outfitted with creepy devices allowing him to spy on children, is all set to deliver his presents. But his plans are foiled by an imp named Pitch, sent to Earth by the devil to ruin the holidays for the world's poorest families. Yes, this is a real kids film (which, incidentally, no kid should ever see), a 1959 Mexican feature called Santa Claus. And yes, it is as unhinged as it sounds. We recommend you put the little ones to bed, spike your eggnog and put on the Mystery Science Theater 3000 episode that featured this inexplicable movie; it's one of the cult series' funniest outings, leaving the famously silhouetted hosts just as baffled and hilariously horrified as you will be. (For more MST3K-themed holiday merriment, their episode mocking the 1964 disasterpiece Santa Claus Conquers the Martians is streaming on Netflix.) Free on YouTube; available to rent on Amazon ($2.99). (NW)

If anyone deserves the leeway to make any damn Christmas special they want to, it's national treasure Bill Murray. This 2015 holiday treat struck perhaps a bit more melancholy than celebratory, but I'm onboard with A Very Murray Christmas becoming part of my annual Christmas rituals. The story — and I'm using that term loosely — involves Murray trying to put on a big Christmas show at New York City's Hotel Carlyle, only for a blizzard to put the kibosh on his plans. As Murray and the trapped hotel guests and workers meander through a distinct lack of holiday spirit without a show to do or see, viewers witness an occasional f-bomb and plenty of Murray crooning. Through the darkness, though, you get comic gems like Murray and Chris Rock performing "Do You Hear What I Hear?" in matching Christmas sweaters, and winning guest turns from the likes of Amy Poehler, Michael Cera, Rashida Jones, Maya Rudolph and more. After a gloomy singalong of the Pogues' "Fairytale of New York," the show bursts into a Technicolor dream complete with prancing Rockettes, Miley Cyrus and George Clooney singing and dancing. Directed by Sofia Coppola, A Very Murray Christmas boasts laughs, anger, booze and tons of music you only hear this time of year. In other words, it's a perfect encapsulation of the season. Streaming on Netflix. (DAN NAILEN)

THE MAN WHO INVENTED CHRISTMAS

I'll watch anything starring Dan Stevens, the charming, handsome, blue-eyed Brit perhaps best known for his role as the dreamy Matthew Crawley of Downton Abbey, and more recently, the spellbound prince of Beauty and the Beast's live-action adaptation. (Stevens is also spectacular as X-Men character David Haller in the TV series Legion, which aired early this year on FX.) Next up in the English actor's repertoire is the family-friendly, holiday period drama about Charles Dickens' struggles to write what became one of his most pivotal works, A Christmas Carol. Based on a biographical novel of the same name, The Man Who Invented Christmas transports viewers back to Christmastime in Victorian London as a writer's block-suffering Dickens anxiously seeks inspiration for his next work. The novella needs to be completed in six weeks in order to be released by Christmas Day, and to stave off the debt collectors. As in previous roles, Stevens captivatingly portrays the frazzled genius of Dickens as he encounters real-life Londoners who become the bones for fictionalized versions of Scrooge, Marley and Tiny Tim. The Man Who Invented Christmas is packed with more heartwarming holiday charm and nostalgia than any Hallmark movie could even aspire to reach. It's now playing in theaters, locally at AMC and Village Centres at Wandermere. (CHEY SCOTT)

Pee-wee Herman (aka Paul Reubens) lost his career for a "scandal" that would barely make the headlines now, 26 years later ("adult man attends adult theater" — gasp!), and as a result generations have missed out on some of the most gloriously unhinged, surreal comedy that ever graced Saturday morning television. Consider this Pee-wee's Playhouse Christmas Special from 1988 an ideal opportunity to revisit some of the regulars from Pee-wee World — Chairry, Pterri, Jambi the genie and Cowboy Curtis (Laurence Fishburne in rare form) — along with the incredibly creative animation and puppetry, and absurd jokes, that made Pee-wee such a treasure before his 1991 arrest. There's more fruitcake than any one Christmas special needs, and a cavalcade of guests joining the fun, from Grace Jones and Cher to k.d. lang and Oprah Winfrey. Oh, and Charo doing "Feliz Navidad" — it just doesn't get any better than that. Streaming on Netflix. (DN)

I am not alone in sharing a nostalgic fondness for this semi-obscure, 1986 version of the weird yet charming dreamtime journey of young Lisa (Drew Barrymore) to a magical place called Toyland. Reviews in the iTunes store echo my sentiments for this dorky, sort of scary and simultaneously magical film being a childhood favorite: "I grew up on this movie, and when I found it on iTunes... I nearly started crying." Anyhow, the gist is that on Christmas Eve, Lisa gets transported to the magical world of Toyland, an Oz-like land where both toys and fairytale characters, including Jack Nimble (Keanu Reeves) and Mary Contrary, are alive. Alas, but the evil Barnaby Barnacle and his nasty troll minions plan to take over Toyland and end Christmas forever! It's now up to Lisa, Jack, Mary and crew to thwart Barnaby's plans and save Christmas, but in order to do so, Lisa must find it in herself to truly believe in the denizens of Toyland. As with any kid favorite, this film might not hold up for others who don't recall its captivating childhood charm. At the least, a rewatch for me brings back memories of my sister and I reenacting scenes from the made-for-TV film, which we owned on VHS, such as Jack and Mary's storybook wedding. Streaming via iTunes ($3.99 to rent; $14.99 to purchase). (CS)

When it was released in 1988, Richard Donner's Scrooged was mostly met with shrugs: It didn't exactly burn up the box office, and critics were either nonplussed or outright mystified by it. (Roger Ebert called it "unsettling," "desperate" and "embarrassing.") Perhaps that was because it starred Bill Murray (hey, there he is again!) and yet wasn't trying to capture the same bouncy, high-tech comedy of Ghostbusters, or because it turned out to be far darker and more harebrained than audiences expected. (It was co-written by the late Michael O'Donoghue, once Saturday Night Live's resident nihilist.) But Scrooged has become something of an offbeat Christmas favorite in the decades since, and it still works as a showcase for Murray's manic comic energy. In a 20th-century take on A Christmas Carol, Murray plays a craven TV executive who is — surprise, surprise — visited by a trio of ghosts that take him back and forth through his life to remind him he'd be better off not being a jerk all the time. It's refreshingly strange, particularly in its truly inspired casting of Carol Kane, Bobcat Goldthwait and rock star David Johansen in wacked-out supporting roles. Streaming via iTunes, Amazon and YouTube ($2.99 to rent; $9.99 to purchase). (NW)

I'm a Muppets fanatic, and have been for life, so let's get that out of the way first off. And among the myriad version of Charles Dickens' holiday classic, this one is my favorite thanks to the presence of Jim Henson's Muppets and some winning tunes from Paul Williams filling the soundtrack. The Muppets' take on Ebenezer Scrooge, Tiny Tim and Bob Cratchit et al. hews closely to the source material, but adds plenty of Muppet silliness, starting right away with having Gonzo (as Dickens himself) and Rizzo the Rat narrate the proceedings together. Michael Caine is the lead human, playing Scrooge with dramatic flair (as he is wont to do), but the most fun is seeing how familiar Muppets fit in to the Dickens universe. You'll spot Beaker and Dr. Bunsen as charity collectors. Old codgers Statler and Waldorf appear as Scrooge's old business partners, the Marleys. The Swedish Chef, Fozzie Bear, Sam the Eagle and more all fly in and out of the proceedings as Kermit the Frog and Miss Piggy naturally fill the roles of Bob Cratchit and his wife Emily. Ornate sets, solid original holiday tunes and a heavy dose of Muppet silliness makes this Christmas movie, celebrating its 25th birthday this year, one worth rewatching. Streaming on HBO Go; available to rent via Amazon, YouTube and other outlets. (DN) ♦

Bill Murray is the real 'generic father figure,' felon carries gun to 'clean up the streets,' and morning headlines