Cinnamon rolls are a cozy fall treat; here's seven baked in the Inland Northwest to try 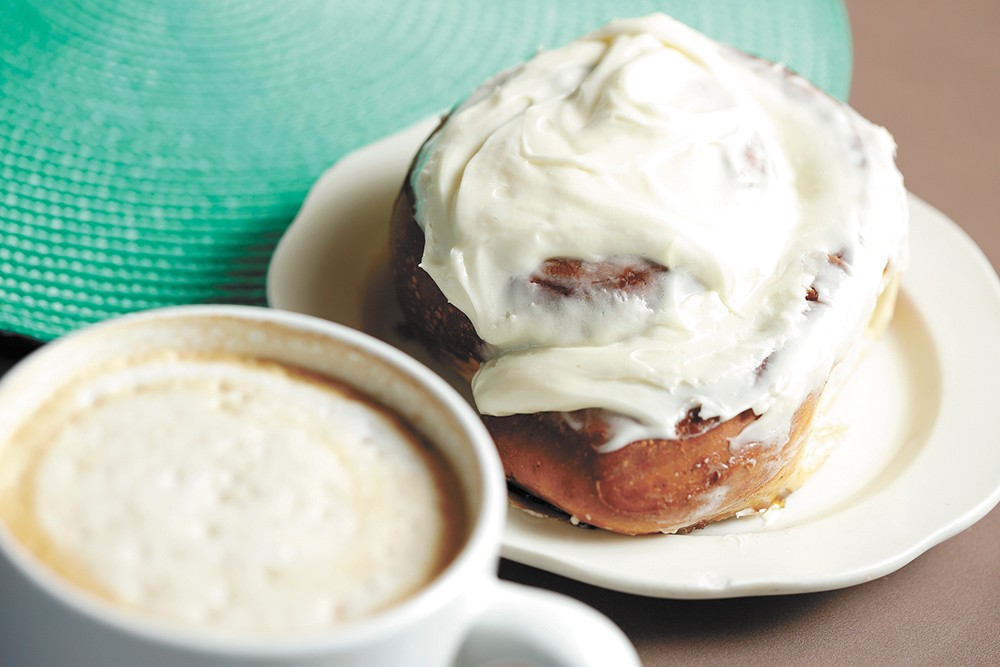 It may be the heart of pumpkin spice season, but there are plenty of other cozy, sweet treats to enjoy as temperatures drop and the leaves fall. Perhaps there's none so classic as the traditional cinnamon roll, a pastry that can, and should, be enjoyed with a steaming cup of coffee, chai tea or other hot beverage, and at any time of the day. Here are seven cinnamon roll creations from bakeries and cafes around the Inland Northwest that were recommended to us, and which we now encourage you to try, too.

After reopening under new ownership this summer, Maple Street Bistro debuted a new spruced up look and vibe, though many customer favorites remain on the menu of the neighborhood cafe near Spokane's Five Mile area. That includes its lineup of pastries, baked fresh daily, like the house cinnamon roll ($4), a hand-sized, perfectly spiraled treat with a creamy, buttery frosting and warm nutmeg and cinnamon coating the inside layers. Maple Street Bistro also makes a popular pecan-topped cinnamon roll. While nothing beats a fresh, warm roll, those looking for a deal can occasionally find a few on the bistro's day-old pastry rack for just a buck. If a full-size pastry feels like too much, the bistro also makes a special cinnamon roll latte. (CHEY SCOTT)

Specializing in traditional, scratch-made French pastries, Madeleine's cinnamon roll is no casually baked creation. Featuring a perfectly gooey spiral of thin pastry layers coated with cinnamon and other warm spices, this comforting treat is rich, decadent and perfectly executed. Topped with a very generous portion of buttery cream cheese frosting, it's definitely best enjoyed warm, with a cup of house-made espresso, or a cold glass of milk if that's more your style. If you've never had this local favorite cinnamon roll, it won't take more than one bite for you to also become part of its fervent following. Don't wait until too late in the day to stop by and get one, though, as the day's fresh batch tends to go fast. (CHEY SCOTT)

Whoever said size doesn't matter has never had one of Chomper Café's cinnamon rolls. They're about the size of a bread plate, says owner Sarah Baker, who teamed up with former Seattle-area baker Dana Bellefeuille to make what they consider soft "non-perfect looking" rolls. Not too sweet and with a variety of topping options, they nonetheless satisfy well past the breakfast hour. Served at both Chomper and Baker's new restaurant, Belle's Brunch House, the rolls vary with the seasons, like pumpkin pie and gooey apple cider caramel in the fall. The huckleberry ($6) means bright, tart berries spilling over the top of the roll, while the classic ($4) features from-scratch cream cheese frosting gobbed on top. Can't decide? Try a trio for $10. (CARRIE SCOZZARO)

Prepare to share this gigantic cinnamon roll ($3.50) with a friend or two — it's seriously as big as a saucer, though that's a good thing, especially when splitting. The massive pastry is best enjoyed warmed up, our barista notes, who also recommends using the oven (or toaster oven) to do so if you order one to enjoy later. A generous amount of rich cream cheese frosting on top leaves plenty of icing to spread on each bite of warm, chewy dough. (CHEY SCOTT)

It's down-home cooking at this longtime Coeur d'Alene institution, which Gretchen Surber and her husband Mike Surber took over in 2012, updating décor, adding a handful of dishes, but otherwise keeping the focus on classic comfort foods. They serve breakfast all day, but if it's sweet and crunchy you're after, then nothing but their Southern pecan cinnamon rolls ($6) will do. Fluffy and light, swimming in caramel syrup and bursting with sugary cinnamon filling, these rolls earned top marks from Diners, Drive-Ins and Dives' host Guy Fieri when he visited on behalf of the Food Network in 2011. What really makes the pastry, though, besides the fact that it spills over the edge of the plate, are the pecans. They add a distinct Southern nuttiness that pairs perfectly with the caramel and gives you the right amount of crunch. (CARRIE SCOZZARO)

The only problem with the cinnamon roll you'll find at Chaps is in your head (or maybe stomach) — can you resist the temptations elsewhere on the menu enough to enjoy one of the large pastries? A no-brainer tip: Plan on sharing and go ahead and order the blueberry French toast or chicken-fried steak knowing you have a sweet treat waiting for dessert. I'm an unabashed believer that one can't have enough icing on a cinnamon roll, and Chaps doesn't disappoint on that point, while the roll's innards have a hint of citrus. A nice bonus, also find Chaps' cinnamon rolls at its Kendall Yards coffee spot Paper & Cup on Saturdays and Sundays. Be sure to get there early at either spot, though, because the cinnamon rolls are as popular as they are tasty. (DAN NAILEN)

With a variety of fresh bagels, quiches, cakes, cookies and brownies to choose from, Rocket Bakery's cinnamon rolls might stand to get lost in the shuffle. But for those looking for classic warm, cream cheese frosting-covered cinnamon roll bliss, their rolls ($3.25 or 50 percent off after 4 pm) are sure to hit the spot. Bring a big appetite or share with a friend, because this roll is a decent size, especially for the price. Pair with a drip coffee or Americano to offset this sugary breakfast treat. (SAMANTHA WOHLFEIL) ♦