Homeowners in northeast Washington are already preparing for wildfire season 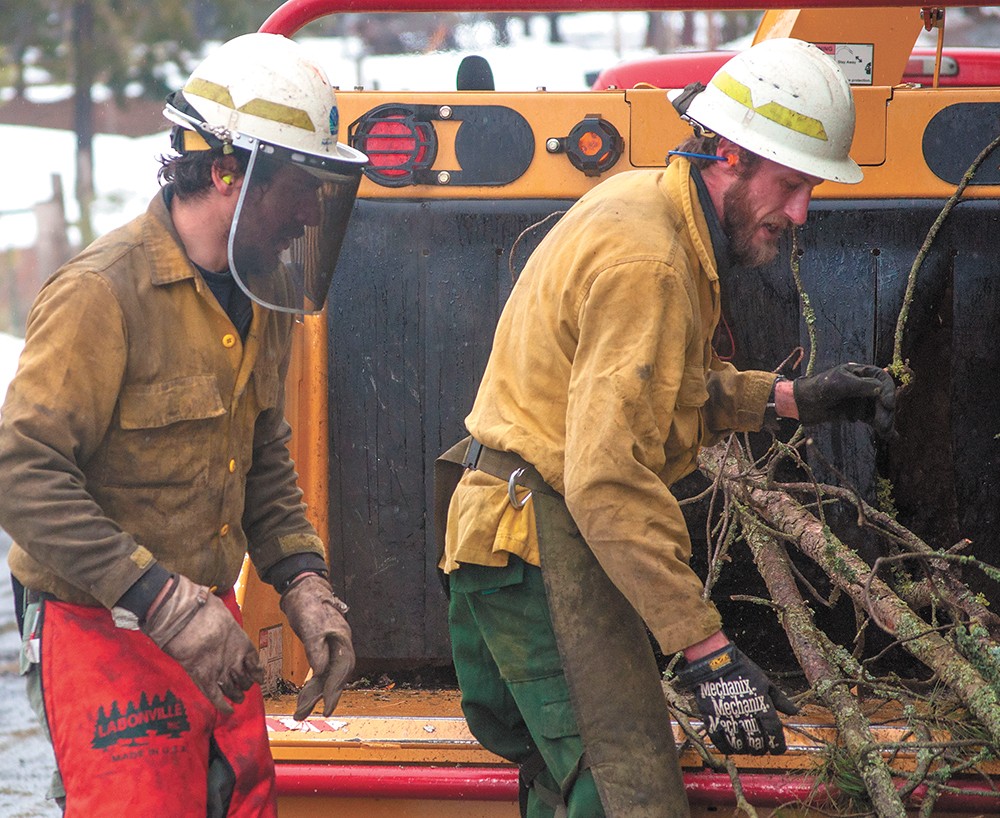 Samantha Wohlfeil
Max Leyva and Roger Holloway work with a DNR forest crew to thin trees on a property near Nine Mile Falls.

Though patches of snow still dot the ground off much of 4 Mound Road,

some in that part of the Nine Mile Falls community already are preparing for wildfire season.

Crews from Washington's Department of Natural Resources worked in the rain Monday morning to thin branches and small trees near North Samek Lane, using chainsaws to cut down pines and then loading the debris into a chipper.

You wouldn't know it now, but this area was hard-hit during a wildfire known as "Firestorm" in October 1991, a fire that took out more than 100 homes in four counties in a single day.

Bonnie Cobb remembers that day well. The fire came up the canyon, somehow jumped over her home, and then burned through hay bales, three outbuildings, brush and trees.

"I had two babies at home, and we went and turned the cows and horses into the field and waited there, and after the fire passed we came back up," Cobb says.

They fought embers with hoses after that. They were lucky that their power was still on to pump the water — many of the fires were started when gale-force winds knocked down power lines, and it's common to lose power during wildfires.

More than 25 years later, the house is still there (Cobb rents it out now) but the area where there used to be a thick stand of trees is now a mostly open field, with a handful of younger trees dotting the snow-covered ground.

In 2006, Cobb joined the local fire department, and later helped gather neighbors to participate as a "Firewise Community," preparing homes and properties to make them less vulnerable to and more resilient during wildfires.

Cobb had trees on her property thinned in 2013 as part of the early Firewise work. The thinning on Monday was on a neighbor's property just across the road. The next day, Gov. Jay Inslee was scheduled to come see how the northeast Washington community is preparing this year, and talk about how others should get ready.

About 85 percent of wildfires in Washington are caused by humans, according to DNR.

Only about 31 percent of fires in Idaho from 1992 to 2012 were started by people, but the state also had the most burned land of all states in the lower 48 during that time period, according to a study released in late February by researchers from the University of Idaho, University of Massachusetts-Amherst, and University of Colorado-Boulder.

Lightning is still responsible for burning the most land in the Pacific Northwest, but the researchers saw a rise in human-caused fires.

"We saw significant increases in the numbers of large, human-started fires over time, especially in the spring," project leader Bethany Bradley says in a news release about the study. "I think that's interesting, and scary, because it suggests that as spring seasons get warmer and earlier due to climate change, human ignitions are putting us at increasing risk of some of the largest, most damaging wildfires."

The spring fire season in northeast Washington often starts after the snow finally melts and the leaves, grasses and shrubs that died off the previous fall start to dry out quickly, says Guy Gifford, a DNR spokesman for the region.

Outdoor burns are largely to blame, Gifford says, especially those that don't have an adequate fire block, like a ring of rocks or dirt around a campfire.

Aside from being mindful when burning, one of the keys to preparing a home is being "ember aware," Gifford says.

Basically, if a lit match were to fall somewhere outside your home, what would catch on fire, and how might that lead to a bigger fire, putting you at risk?

Is there a newspaper bin left outside next to a wooden deck? You might keep that in a different place. A straw broom next to some cardboard? Same story.

Beauty bark can be a risk, as can other plants, and cedar shake roofing can also be easier for embers to catch on and burn, Gifford says.

DNR and local fire departments offer free assessments to help homeowners decide what their biggest issues might be and get an idea of what they might address to lower their risks, says Gifford.

"They can look at a property and analyze, 'Yeah, there is beauty bark, but is that your worst issue?' No, maybe the other plants are," he says.

If you own forest land, you might also qualify for a DNR grant to reimburse up to half the costs of thinning the plants and slash, making it less susceptible to fires.

From a weather standpoint, Washington is looking fairly good so far for the spring fire season, says Josh Clark, a DNR meteorologist.

The state has had below-average temperatures, and snowpack is at 100 percent or more of normal.

"Below-average temperatures means fuels are not going to be drying out nearly as fast," Clark says. "We will have a lot of moisture content well into early fire season."

That said, the snowpack on April 1 is really the big early indicator.

"It's kind of our first either really big red flag or sigh of relief," he says.

Because so many fires are started by people, it can be hard to guess where they'll start, Clark says.

"It really depends on fire prevention efforts, and getting folks to be very mindful when and where they're setting fires, and how they're tending to them." ♦