Laura Johnson
The view from Cliff Drive proves to be a revelation for many residents and visitors alike.

One must pay attention when walking these sidewalks.

The old deciduous tree roots want to break free, and the concrete is often uneven. Cracks and potholes show on the streets, many of them brick-paved and more than 100 years old. On this afternoon, you can smell the sweetness of the flowers and the plums. Strolling through this leafy lower South Hill neighborhood, you wonder if founder Anthony McCue Cannon, a man who died penniless and alone, imagined his Cannon's Addition to the town then known as Spokane Falls would survive more than an entire century.

This part of Spokane is now paired with the equally historic Cliff Park District, which touts some of the most gorgeous homes in town. With their powers combined, the Cliff-Cannon neighborhood forms a socioeconomic hodgepodge, full of people from all over the world. Quite different from the days when most of these stately manors housed Spokane's elite, and often their servants.

While a handful of apartments have gone up and many of the historic homes were gutted and converted into multi-unit residential buildings, no major new housing construction has occurred since 1920. It's a place that shows its age, and its residents don't want that to change.

ROCKET AROUND THE CORNER

It's nearly pumpkin season here, or so Eastern Washington University student and barista Audry White laments to one of her customers this morning. Summer is quickly fading, and with it, a penchant for pumpkin spice lattes is growing. This particular Rocket Bakery, on the corner of 14th and Adams, provides coffee cake and caffeine to the neighborhood beginning at 6 am, which means White, who also lives nearby, arrives at 5:30. Here she knows her neighbors and her regular customers.

Asked about her day, she tells one customer that she hates Mondays.

"Every day is Monday, until Friday," she counters.

"I like that, I'm going to use that," he says, walking out into the morning air.

CHECK OUT THIS VIEW

You can't park here, move along. Boulders were placed along Cliff Drive last year to prevent too many people from causing noise and littering. But if you do park your car here anyway, or walk or ride your bike, you can still stand on the glorious edge of Spokane. From here on a pockmarked basalt rock in Edwidge Woldson Park, Spokane's downtown core looks mighty. You feel powerful, like you're looking down at your kingdom.

It wasn't until the early 1930s that Cliff Drive and its views were opened up to the public with a through road. As Spokane resident Dan Close wrote in to the Spokesman-Review in 1931, "To thousands of citizens to whom this wonderful view has not previously been accessible, the completion of the improvement will prove a revelation — part of their heritage as Spokane citizens that has been denied them these many years."

She isn't afraid to people-watch. The front porch of her Colonial Revival home, the one you could sit on before the arrival of I-90 and hear the purr of the Spokane Falls, provides an excellent view.

"We have big plants in our front yard, and I have people stopping by and describing them to their children in all different languages that I don't understand," says Rosemary Small, who lives around the corner from the Spokane Woman's Club (Ninth and Walnut) where she serves as president.

She likes the diversity in the neighborhood, that it is full of college students and halfway-house residents and families and recent refugees settled by World Relief Spokane. This dynamic was one of the reasons that she and her husband decided to move here 12 years ago, after leaving Yakima. She says that here people wave, and that women are comfortable walking alone.

"With a mixed-income neighborhood, you get everybody living here, and it's just wonderful," Small says.

The other draw was the Woman's Club, which in recent years has seen a major membership resurgence. Last year, the club, built in 1910, was approved for a $300,000 federal grant to work through necessary upgrades. They hope to be done with construction by October.

The Cliff-Cannon Neighborhood Council also meets at the Woman's Club. Patricia Hansen says she and her group of six other volunteer councilmembers work hard to keep the integrity of the area intact.

"It comes down to protecting the scene and the neighborhood feel," says Hansen, who's been on the council for five years. "Cliff-Cannon has more historic districts in it than any other neighborhood in the city, and so to be aware of that, and to have this push from the downtown core to attempt to change the theme of residential property, is a big concern for us." 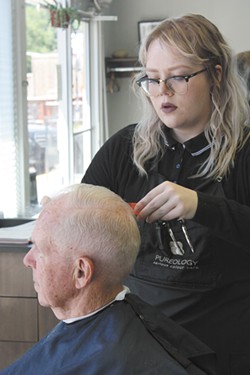 Children accompanying their parents often point out to Kendra McKay that she doesn't look like a barber. But since taking over Sandy's Barber Shop two years ago, when she was just 20, she says she's enjoyed excelling in a male-dominated profession. She's here, in this small shop, five days a week cutting hair and trimming beards for customers ranging in age from 20 to 80.

Today, while cutting Peter Joss' hair, she inquires about his eyebrows.

"If you don't trim them, the wife will," the 78-year-old tells McKay from the swivel chair.

Joss is one of those customers who's been getting his hair cut at Sandy's for 10 to 15 years (retired years tend to blend together, he says). He grew up in this neighborhood and attended Lewis and Clark High School, as did McKay decades later.

"You get used to someone and you go with it," says Joss of sticking with the spot.

He says he recently attended the funeral of his favorite high school teacher, and was surprised to see so many fellow LC classmates. His old geometry teacher, in his 90s now, even attended and immediately recognized Joss.

"It shows you how connected we were then," he says. "Spokane is such a small town. People who take care of you, like a teacher or a barber, you value it when you find a good one." ♦