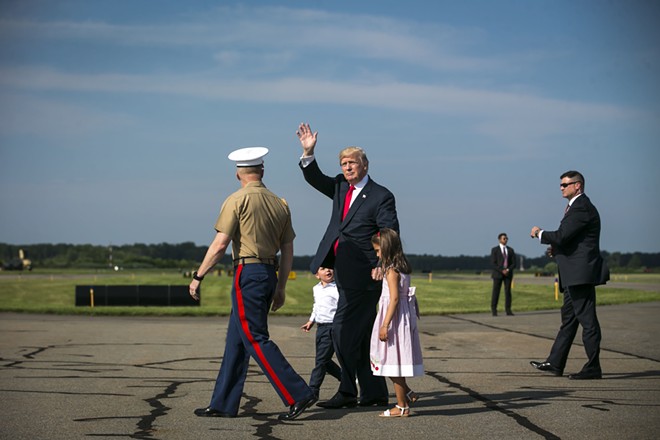 
WASHINGTON — The average temperature in the United States has risen rapidly and drastically since 1980, and recent decades have been the warmest of the past 1,500 years, according to a sweeping federal climate change report awaiting approval by the Trump administration.


The draft report by scientists from 13 federal agencies, which has not yet been made public, concludes that Americans are feeling the effects of climate change right now. It directly contradicts claims by President Donald Trump and members of his Cabinet who say that the human contribution to climate change is and that the ability to predict the effects is limited.

“Evidence for a changing climate abounds, from the top of the atmosphere to the depths of the oceans,” a draft of the report states. A copy of it was obtained by The New York Times.

The authors note that thousands of studies have documented climate changes on land and in the air. “Many lines of evidence demonstrate that human activities, especially emissions of greenhouse (heat-trapping) gases, are primarily responsible for observed climate change,” they wrote.

The report was completed this year and is a special science section of the National Climate Assessment, which is congressionally mandated every four years. The National Academy of Sciences has signed off on the draft report, and the authors are awaiting permission from the Trump administration to release it.

The White House and the Environmental Protection Agency did not return calls or respond to emails requesting comment Monday night.

The report concludes that even if humans immediately stopped emitting greenhouse gases into the atmosphere, the world would still feel at least an additional 0.50 degrees Fahrenheit (0.30 degrees Celsius) of warming over this century compared with today. The projected actual rise, scientists say, will be as much as 2 degrees Celsius.

The difference between a rise in global temperatures of 1.5 degrees Celsius and one of 2 degrees Celsius could mean longer heat waves, more intense rainstorms and the faster disintegration of coral reefs.

Among the more significant of the study’s findings is that it is possible to attribute some extreme weather to climate change.