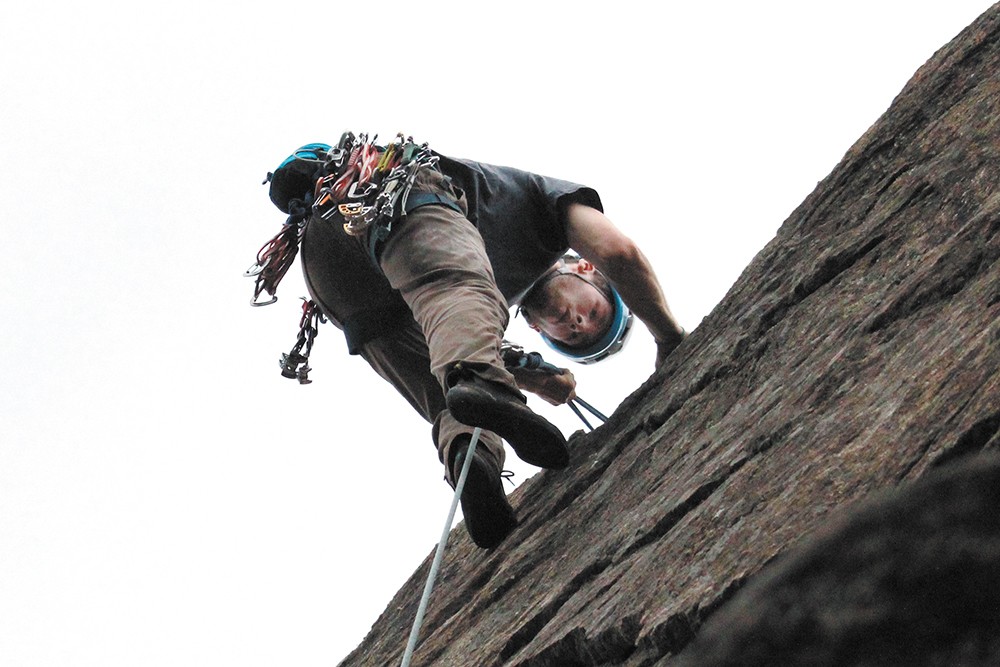 Climbing has gone mainstream. It's no longer just a sport for adrenaline-addicted athletes. You, too, can be a climber.

There are now more than 400 new rock-climbing and bouldering gyms (and counting) in the U.S., a trend that began in the late '80s, according to a 2017 New York Times article, "A Boom in Rock Climbing, Minus the Rocks." The sport is making its Olympic debut in 2020 in Tokyo, thus solidifying its place in mainstream society, which is actually pretty cool, considering that the threshold for beginning climbers is a low bar (or maybe it's a pink plastic rock bolted into a wall).

It's fun, and while there are "serious" athletes, casual climbers are also welcome, says Brice Niemond, a climbing instructor at Bloc Yard, one of two climbing gyms in Spokane.

"People of all shapes and sizes come into our gym and try it," he says. "I think that climbing is one of the sports that is often seemed as something that is super difficult, and when people come into try it for the first time, they are surprised by what at they are able to do."

Not only that, climbers belong to a supportive — though somewhat niche — group of borderline-hipster athletes.

"In the Spokane community most people know each other's names. It's not something you can do alone," says Niemond. "You need people to help you and teach you."

Lucky for us, the climbing community is alive and well in our region. There are four climbing gyms in the Inland Northwest, including in Moscow and Sandpoint. There are also about 15 great places to go climbing, all within about a 90-minute drive from Spokane, says Todd Mires, a manager at Spokane's Wild Walls.

Minnehaha Park is considered one of the best places to go climbing outside, with a rock face that boasts more than 70 "routes" to traverse. Farther east of Minnehaha is Q'emlin State Park in Post Falls, also a good place for rock climbing, as are the Deep Creek Canyon in Riverside State Park and the Dishman Hills climbing area.

We asked both Niemond and Mires for their advice to beginners. Responses have been lightly edited for length and clarity.

INLANDER: What would a beginning climber need to get started in the sport?

BRICE NIEMOND: Climbing is one of those things that if you're just climbing indoors, you really don't need anything. If you're going for the first time, just show up in gym stuff. You can rent climbing shoes. Pretty much any gym will have those to rent.

TODD MIRES: Part of it depends on [if you're] looking to boulder, you just need some climbing shoes and a chalk bag. If you're going outside, you might need a crash pad. The best option is to do an intro class. ... It's super easy for beginners to get started that way. It's pretty non-intimidating. It's definitely not too expensive to get started and not too time consuming.

How can people train to climb?

NIEMOND: There's a famous saying: The best exercise for climbing is climbing. It's really not an exercise that you can simulate well outside of actually climbing. Eventually you hit a wall and you're not improving any more. Then it's time for some calisthenic workouts. ... Come in the gym and see what your strengths and weaknesses are.

We find people who are dancers are really good at climbing because the movements are similar. Rock climbing has a lot to do with your feet. Which isn't something you wouldn't immediately notice.

MIRES: The muscle groups you use in rock climbing, you don't use in any other activity. People ask me this all the time. You just have to do it a lot. There's no magic trick. Unfortunately, for some people, you have to put in the work and the time.

I would strongly recommend people start in the gym if you never climbed before; otherwise you put yourself in a potentially really dangerous position.

What are some of the potential risks to climbing?

NIEMOND: It's probably not accurate to say climbing is the safest thing you can do. Sprained ankles. Banged shins. Maybe a rock falling off from above might strike you.

Anytime you're climbing higher than 5 or 10 feet you are usually attached to a rope. When you climb more than 10 feet up, when you fall, you're looking at injured legs. You might hurt your spine... even death. That's the risk.

MIRES: Obviously, death is a very real risk. I just think, if you're going to try out climbing, go with someone you trust that they know what they are doing. ... We also do training for people to climb outside of the gym.

There are more than 400 climbing gyms in the U.S. Four of them are located right here in the Inland Northwest.

Climber Jess Roskelley reached his 'pinnacle of achievement' before his death. Now his family is left searching for answers