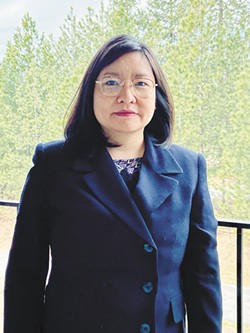 Karen Yao, a 44-year-old virologist and resident of Coeur d'Alene, has experience studying viruses and disease. After emigrating to the United States with her family from Hong Kong in 1987, she went on to complete her graduate studies on viral immunology at Johns Hopkins University and a fellowship at the National Institutes of Health. Now, she works as a consultant for government agencies, nonprofit organizations and independent scientists. We called her up to see what she thinks of the U.S. response to the COVID-19 pandemic, what lessons we can learn from other countries that have dealt with epidemics in the past, and the mindset that people in the Inland Northwest should be in.

This interview has been lightly edited for space and clarity.

INLANDER: What do you make of the U.S. response to COVID-19? Will it be effective?

YAO: The United States doesn't have any real testing capability that is widespread for everyone. So prevention is out of the question. I'm afraid [that] the lack of testing really could be providing some kind of false sense of security for people in terms of their response. If we are able to get our testing up and running, if people can get testing easily, then you can identify who is infected and then you can identify who needs to be isolated.

The social distancing will hopefully help to delay the spread of the disease. So we won't change the actual numbers of the people that will be infected, what changes is just the time and course that the disease will take.

But lacking testing, lacking treatment, and lacking a vaccine, the infection is still going to spread. By the time we're seeing symptoms, the infection has already moved on. So the only thing that people can do is slow it down by social distancing.

How does the American COVID-19 response compare to measures taken by China or other countries that have seen success?

If you look at countries in Asia, Hong Kong, Taiwan and Singapore, those countries were hit by SARS in 2003. They were hit really hard then because that was the first time they had to handle it. But having gone through that, what we've seen this time around is that they responded quickly. They put in those social distancing measures very quickly; Hong Kong was actively paying people to stay home. These are highly populated areas [and] they are small territories. But if you look at the numbers, they've done a better job at controlling infections.

China has free treatment and testing for everyone. They've also made the testing and isolation mandatory. Whereas in the U.S. you have to go to your health care provider and your health care provider then refers you to a testing site and then after you get your results, you may or may not need treatment. I don't think our medical system here has the capacity to take care of everyone.

There are 30-some-million people in the United States who don't have a regular health care provider. So those people are not going to be tested in the first place and if they did get tested and find out that they're positive, they may not want to go to the next step and get treatment because they can't afford it. I think those two factors together, the hurdles that you have to go through to get tested and then the cost of treatment, might have a huge impact on our ability to actually fight the virus.

How should people in the Inland Northwest think about this pandemic? Why are government-ordered social distancing measures so important?

This is going to be something that is long term and won't be over in just a few weeks. Treatment, it's not there yet, and vaccines, it's a year away. Those are very real projections that we have to be prepared for. What I'm seeing right now is that our local communities are actually coming together to organize ourselves to actually help each other. On the local level, people are starting to do a lot of that.

Without those [social distancing] orders, people are not going to take it seriously. So if only certain areas are implementing those strategies, people are going to go to places that don't have those measures. For example, Washington state had social distancing measures, closing down bars and restaurants, so a lot of people came over to the North Idaho area to go to the bars and restaurants. That's not really going to help in controlling the infection. It's going to have to be more of a statewide or nationwide practice at this point. Having those messages come from our officials and the governor is very important versus having individuals decide "should I go out or not?" ♦