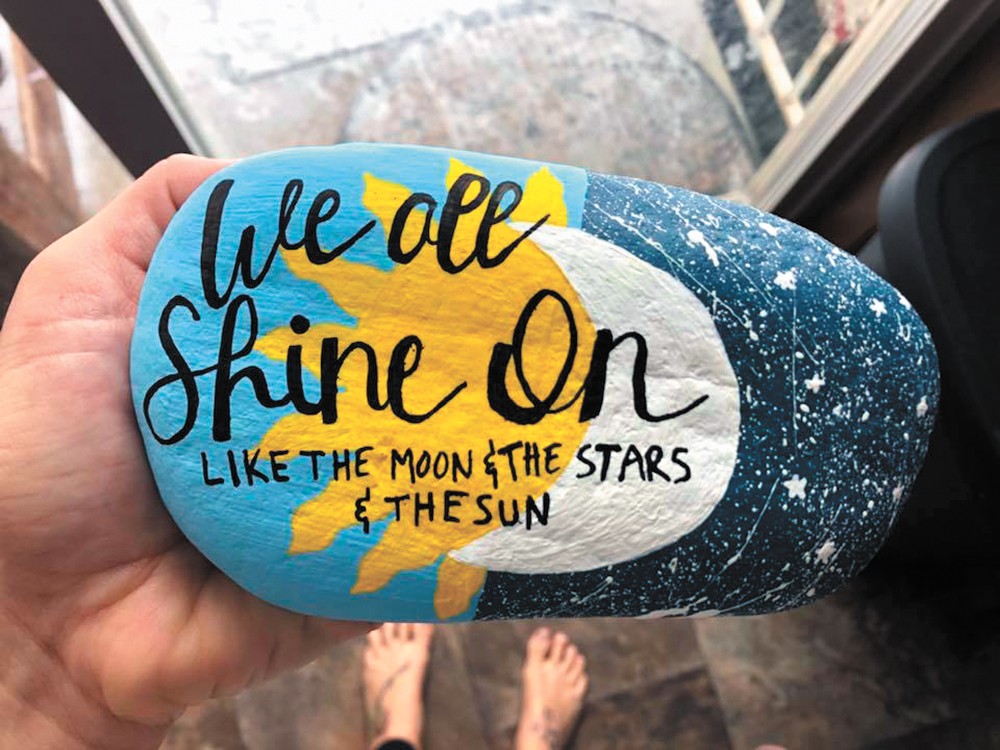 A rock inspired by John Lennon.

, welcome ripples of color increasing along with the temperature. Purple, yellow and vibrant green burst forth — the colors of Mardi Gras and Easter — but what is that flash of blue? Or orange? Or the rainbow buried in the spring-soggy grass?

If it's small, hard and inanimate, it's most likely a painted rock that's purpose is fulfilled at least twice: first, when it is made and again when it's found.

"It's a kindness project, that's all we do," says Kelly Walters, who created the CdaRocks Facebook community with her sister Vicky Salinas in 2016, inspired by her adult daughter, who created a similar group on Whidbey Island, Washington.

The premise is simple: if you find a painted rock, take a photo of it and post it to the group (look for the message: "Post a pic to FB Cda Rocks"). Re-hide the rock right away, later or not at all.

Some of the rocks left, and found, by the CdaRocks group.

Some rocks never get posted, says Walters, who encourages members to look on the bright side. "Know that it's there and that somebody wanted it and cherished it," she says.

Although posting images of rocks or personal narrative about the experience is not required — not everyone who finds CdaRocks has access to social media — doing so is the glue by which this online community bonds and grows. Consider the woman who found a painted rock as she left the hospice facility where her father had recently passed away. After a year, she felt moved to rehide the rock so someone else could have and "give grace" as she felt she had been able to do. The rock became a touchstone for her transformation.

Then there's the father whose young adult son died in an accident. His posts expressed his uplift while looking for rocks, making them and even finding some left at the roadside memorial to his son that he created.

The online images construct a shifting mosaic of member concerns: the death of a pet — sometimes referred to as "passing or crossing over the rainbow bridge" — or a relative, significant health issues and community-wide losses, like the murder of on-duty Coeur d'Alene Police officer Greg Moore, whose radio call number was K27.

"There have been numerous, numerous people, including my sisters and I, who consider this therapy," says Walters, a remediation paraprofessional at a Coeur d'Alene-area elementary school. Part of that therapy, explains Walters, is the sheer joy in making something, in being creative and expressive. 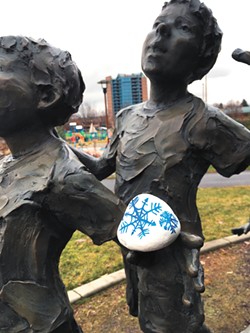 A rock left in the hand of one of the figures in the "Early Explorers" sculpture in McEuen Park.

CdaRocks places few restrictions on content, yet politics, profanity and advertising are red flags to the groups' four moderators. Thus there are images of hearts and other symbols, Pinterest-inspired patterns, landscapes, animals, characters — all made by people of wide-ranging ability and age.

Many rocks bear messages: Peace. Love. Faith. Believe. "Cancer Sucks" is pure vernacular, and nonetheless irrefutable. Other messages are more lyrical: "Love what you get and respect what you love," "She was a rainbow but he was colorblind" and, quoting that inveterate dreamer, John Lennon, "We all shine on/like the moon and the stars and the sun."

Although CdaRocks has no control over where members get unpainted rocks or hide painted ones, they encourage lawfulness and respect. They exhort members to ask permission, for example, before hiding or collecting rocks from any property not their own (hiding a rock in a national park might be considered littering, while local, state and federal public land regulations do not allow the removal of natural material, including rocks). Popular painted rock hunting areas include parks — Riverstone, McEuen, City Park — and outdoor destinations like Tubbs Hill and Trail of the Coeur d'Alenes.

Most rock discoveries occur out-of-doors, yet some businesses have embraced the trend, including local coffee stand Golden Glo, which has incorporated the leaving and giving of rocks into its online promotional presence. Rocks have also been seen at chains like Rite-Aid and Wal-Mart.

Members sometimes ask for rocks to be painted and donated for themselves or the greater good, such as for players in last year's North Idaho College Special Needs Basketball Extravaganza. CdaRocks is also looking for fundraisers to support, such as for muscular dystrophy or Alzheimer's, says Walters, for which they'd marshal members' painting skills and do a rock "drop."

Although CdaRocks is the oldest and largest (12,325 members and growing) of local groups, there are several additional "rock" groups in Coeur d'Alene, Sandpoint and Spokane. In 2016, CdaRocks member Brandy Foreman-Workman compiled a list of 316 rock-painting groups nationwide, while in 2017, Martha Stewart Magazine estimated 500 groups. The trend has spread to other countries and shows little sign of slowing.

"You do it because it makes you feel good," says Walters. ♦