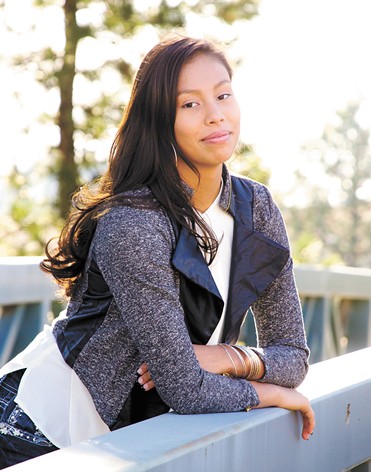 Olivia Pakootas was a talented athlete and gifted student.

As Olivia Pakootas was finishing her education at Tekoa High School, she learned that her plans to wear an eagle feather and beads on her 2015 graduation cap would violate school policy.

As a member of the Coeur d'Alene Tribe who'd embraced her heritage, winning titles as a traditional fancy dancer at Julyamsh powwows, Pakootas wanted to fight for her tribal rights. The senior made her case before the school board, which changed district policy for Pakootas and future tribal members, who may receive and wear eagle feathers as an honor of significant achievements.

Just three summers later, Pakootas' life was cut short when she died in a car crash after leaving work at the Coeur d'Alene Casino early one Friday evening.

Not wearing a seatbelt, 21-year-old Pakootas came at a corner too fast on Highway 58. Her car rolled into a field and she was thrown out of the vehicle. She died at the scene, where her family members gathered over the next few hours, singing with her body and starting the process of sending her on her journey.

Now, Pakootas' family is following her lead in fighting for religious and tribal freedom as they sue Kootenai County and its elected coroner over how her remains were handled after the crash. Her mother, Nicky James, and step-dad Hemene James want the court to find Kootenai County's coroner violated their religious beliefs by holding Pakootas' body longer than necessary after the crash, despite their objections to an autopsy and efforts to get her body back the next day.

They contend that with no further criminal investigation by the Idaho State Police, which already took a blood draw to test for alcohol, there was no need for the procedure to further determine the cause of death. But the coroner, Dr. Warren Keene, insisted an autopsy was necessary, forcing the family to fight in court to get her remains.

The ensuing multiday delay, the family says, forced Pakootas' relatives to condense their usual religious funeral proceedings. Significantly, according to their religious beliefs, it also left their daughter's soul in a sort of limbo, as they believe her spirit was wandering around for days until they could prepare her body and lay her to rest.

"She's a fighter and was always stepping up, and I did not want any other tribal member, family, other mother or father to ever have to go through the steps we had to just to send her off," Nicky James says of the family's decision to sue. "It's just for the blatant disrespect that was shown, of course to me and my family, but most important to her."

"I just remember the doctor coming in when it was 11:09, and I was having a hard time, and he just basically got me in gear by saying, 'You've got two minutes to make this the coolest birth certificate ever,'" Nicky James says.

As a baby, Pakootas starred in the 1998 indie movie Smoke Signals, which was set on the Coeur d'Alene Indian Reservation. Later, growing to more than 6 feet tall, she was a talented athlete and gifted student, excelling in basketball and track and field, and earning salutatorian for her class. She competed in track at Spokane Falls Community College, where she earned her associate's degree, then worked in banquets at the Coeur d'Alene Casino.

By early 2018, while visiting her brother in Montana, she'd decided to enroll at Salish Kootenai College and return to school in the fall, her mom says.

But a little after 5 pm on June 1, just minutes after leaving work, she crashed her car in a field near the edge of the reservation and the Washington state border.

Nicky James says she soon got a call from the chief of the Coeur d'Alene Tribal Police saying Pakootas had been in an accident.

"I asked him if she was OK, and he just said, 'I need you to hurry. Be safe. Be careful, but I just need you to get out there,'" she says.

After calling her husband and other relatives to make sure their other daughters would be picked up, she made the 15-minute drive from her job at Marimn Health to the scene. As she arrived, traffic was stopped and police cars lined the road. James says she was stopped by a state trooper as she approached the field. He asked for her identification before letting her go farther.

"So I was kind of stumbling all over trying to get out there, and that's when the tribal officer kinda hung onto me and steered me around, and I looked down and she was covered in a white sheet," James says, choking back tears. "And then everything stopped."

Things moved fast and slow after that, she says. She vaguely remembers her own screams, then later, those of her son. Other relatives arrived from as far away as Wellpinit.

Nicky had sung Olivia to sleep throughout her childhood with a traditional family lullaby from Olivia's great-great-grandmother.

"So I put my arm over her and I lay down next to her in the dirt," James says, "and I sang her that song again."

The family offered prayers and collected her belongings and any pieces of dirt that may have some of her blood on it. They believe that someone who dies in a sudden, tragic way needs to have all of those things returned and buried with them to ease their soul's passage into the afterlife. When possible, the family will remain with the body until burial.

Pakootas' body was taken by the county coroner's staff from the crash scene that night. The next morning, coming out of the haze of early grief and shock, the Jameses say they tried calling the Coroner's Office to find out where their daughter's body was, but no one called back.

Nicky's brother Francis Si John then took the lead, contacting the tribe's chief legal counsel Eric Van Orden for help. Si John finally got in touch with Keene on Sunday and shared the family's religious beliefs and objection to an autopsy. But Keene insisted that was necessary, which meant the family had to go to court to stop it.

Olivia Pakootas fought for tribal rights before her life was cut short at age 21. Her family is now suing to ensure their religious and tribal rights will be respected in the future.

During an emergency hearing Monday, a judge agreed to release Pakootas' remains to the family's funeral home of choice, but also ordered that no changes be made to the body until another court hearing that Thursday. Before the family could move Pakootas' remains to Palouse, Washington, Keene wrapped her body bag in evidence tape, warning Kramer Funeral Homes workers they could face criminal charges if they did anything before the court hearing, the Jameses' civil complaint alleges.

In an affidavit filed that evening, June 4, Keene wrote that an autopsy was necessary in his medical and professional opinion. Since she crashed without braking, Keene writes that an autopsy could help answer whether there was an unknown medical event, a medication side effect, other chemicals involved, or if Pakootas had been injured someplace else and was escaping.

"Completing the autopsy may be unacceptable to the decedent's family, but doing nothing is equally unacceptable to me based on my duties and authority as the elected county coroner," Keene states.

He continues to say that the family could instead pay for a CAT scan, with a full photographic external investigation.

"What I would not find acceptable, however, is a precedent in which a family member of a decedent would be able to dictate who my office may or may not autopsy," Keene states in the affidavit. "There are a myriad of instances in which an autopsy can reveal a cause of death that is not otherwise apparent, and in some such instances, may lead to discovery of the commission of a crime."

In cases where an autopsy is truly necessary, such as when someone is murdered or dies under suspicious circumstances, the family would be OK with that, Hemene James says.

"But in this situation, it was obvious what the cause of death was," says attorney Van Orden, who is not representing the family in their civil suit but helped with the initial restraining order. "Nobody else was involved, there was no other damage to property, no damage to any other person."

The family notes — and attorneys for the county and Keene acknowledge — that Keene did not take a blood sample from Pakootas until 72 hours after the crash, and then sent it to a lab via FedEx without putting it on ice. That did not follow protocol, and could lead to inaccurate readings, the family alleges.

After getting politicians, attorneys and the tribe to back up the family's religious beliefs to the coroner, the county agreed in a June 5 order not to do an autopsy.

Finally, Pakootas could be embalmed. Her mother, a sister and aunts were able to wash and dress Pakootas in a traditional wing dress, moccasins and jewelry. Normally, they would have then had a family night in their home, with an open casket and a meal together before a daylong service in the longhouse, followed by a funeral in the church and then burial, but the family was unable to do all that.

Instead, they had to condense their Native American and Catholic practices and rituals. They took Pakootas straight to the Rose Creek Longhouse in Worley, where relatives and community members came to pay their respects all night. The next day, they held a church service, and then she was buried Friday afternoon.

The family's religious beliefs are at the basis of their complaint.

Hemene James agrees, saying that too often, indigenous people have had to fight for their rights at the price of heartache and pain.

"If we're the ones that got to pay that price this time, so it doesn't happen again, we're prepared to do that. Not just so no Coeur d'Alene tribal member has to do it, but no Indian person in the state of Idaho has to deal with this again," Hemene James says. "We're not looking to get our spirituality and our procedures justified by anybody. They precede all these courts. We want them to be respected on the same level that Idaho has proven in the past that they defend religious freedom."

Lawyers with Lake City Law Group, representing Kootenai County and Keene, have asked that the court dismiss the case. Keene did not return phone calls asking for comment, but the legal team offered a short statement.

"Our position is that the death of Miss Pakootas is very sad and unfortunate. We empathize anytime there's a loss of a loved one," attorney Katharine Brereton says. "However, we believe the coroner acted lawfully and did not violate any rights of the plaintiffs, and when the facts are before the court, it will agree." ♦