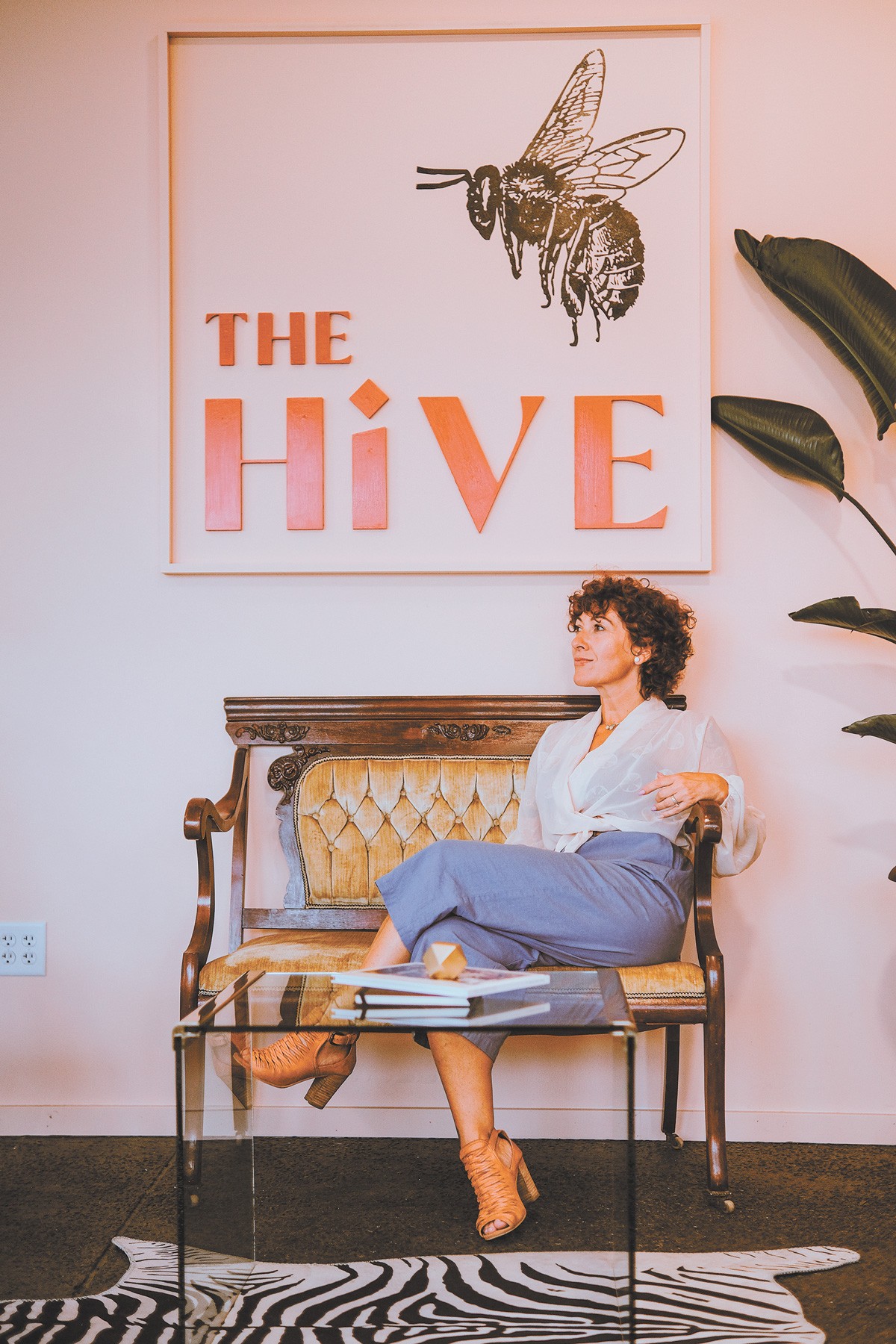 From the sidewalk along Coeur d'Alene's Fourth Avenue, The Hive looks like it might be a new coffee shop. Large plate glass windows showcase a bright, eclectic space with plenty of cozy nooks to curl up with coffee, work on your laptop or meet with a client. The space is full of plants, funky artwork and furnishings, with an L-shaped kitchen with a reddish, '50s-era refrigerator, lavender cabinets and peachy-colored walls.

But it's not a coffee shop (even though local, woman-owned Bee Kind Coffee is working on setting up a modest presence inside). Instead, The Hive takes the best that coffee shops offer to those in need of a place to connect — with co-workers, with clients, with classmates — and elevates the experience both aesthetically and conceptually.

As the second co-working space in the Lake City — the first was inside the Innovation Collective, aka The Den — The Hive has a decidedly different vibe and focus: females.

"This space is designed to empower women to develop into their own 'queen' capabilities," explains Melinda Cadwallader, who opened The Hive with her husband, Michael, and her daughter, Delia, in March.

In addition to targeting entrepreneurs, students, instructors, performers, creatives and makers of all kinds, The Hive is geared toward anyone seeking "a nurturing launchpad where passion projects and grassroots movements can show up and get off the ground," according to the membership page.

And the eclectic aesthetic is integral to their model, says Cadwallader, who designed the space to inspire innovation and encourage nontraditional thinking.

"Sometimes solutions come quicker when we get out of a familiar flow or step away from mundane visuals," she says.

The artwork comes from an amalgam of sources: donated items, estate sales and thrift shops, like the simple yet elegant print of a Picasso line drawing, and Cadwallader's personal stash, such as the print by Nani Chacone, an indigenous artist from the Indian Market the Cadwalladers visited in Santa Fe, New Mexico.

Some art is local.

Bre Gotham created a painting after one of the Hive's "evenings of dialogue" where women gathered to talk about the work they do. And The Continuum is a collaborative string art piece by Chelsea Cordova and Kim Scoggins that has been displayed all over town, each time offering the community opportunity to add a string to it, says Cadwallader.

"It's a continual art piece, a web-connecting individual women's intentions to the community as a whole," she says. "I love that it's here; it's exactly why The Hive exists, to connect."

Cadwallader initially connected with another local businesswoman in 2019, with the intent of opening The Hive by early 2020. Neither the partnership nor the timeline panned out.

Their buildout took longer than expected and funding sources were much lower than expected, so as people moved, changed jobs, closed businesses, and otherwise reacted to the new normal brought on by the pandemic, The Hive had to adapt, too.

They're still a remote workspace, Cadwallader says, with plans for some programming like the monthly writer's group, open mic night and pop-up events related to everything from networking to wellness. During Covid, however, both the community and The Hive organization changed, Cadwallader says.

They simplified membership, for example. For $100/month (half that for students) or a day use drop-in rate of $25, members can access WiFi, the kitchen and various types of meeting spaces, participate in a growing number of Hive events, or host their own event, class or even a photo shoot throughout the 3,4000-square-foot space.

"I joined the Hive looking to connect with other female business owners, have a convenient location to meet clients, and have a central location to engage and create local community events," Winkelman says. Her business offers nutritional health coaching, one-on-one cannabinoid therapy education and hemp educational seminars for businesses.

Of course, members can also just chill, or borrow a book from Cadwallader's fem-forward library, and recharge their creative energy.

As a grassroots organization, Cadwallader says, they keep pivoting to meet the needs of all comers.

Cadwallader is also personally adept at the pivot. After working her way up from salon coordinator to director of a beauty school, she returned to college at age 40. She earned her associate's degree in communications and media studies at North Idaho College, participating in theater and the college paper. While her husband practiced chiropractic medicine at their jointly owned business, Cadwallader started a small business facilitating apprenticeships.

All provided valuable insights into what would eventually become The Hive, which Cadwallader hopes will also help address the local youth gap.

"As a tourist and hospitality town, there is a constant need for youth as employees," she says, noting that they're mostly in the service industry, like food and beverage or retail. What's more, she says, her conversations with business owners have revealed a heartbreaking trend to limit advancement for these types of jobs.

"The creativity and ambition here is high," says Cadwallader. "We just don't nurture it well, which means we don't value it highly enough."

Cadwallader wants to change that.

"Think like a leader," she advises young people, especially women. "Act like your business is a new life you were called to steward; take ownership of your own life and make something out of it, something beautiful, something wild and free from the template created by those who never designed it with women in mind." ♦

The original print version of this article was headlined "Alternative Approach"