NEWS: A police officer stopped a woman who was apparently jaywalking in Spokane and ended up arresting her for obstructing.

NEWS: The University of Idaho would like everyone on campus to know that a tenured associated professor has once admitted to using meth and has access to weapons. Why was that an alert sent to everyone on campus? Good question.

NEWS: Spokane's sit-lie law will begin to be enforced in February due to the opening of warming centers. But do warming centers really count as shelter? 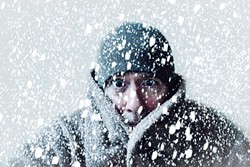 Deadly cold People are freezing to death in the Midwest because it's so damn cold. At least eight deaths have been connected to the cold weather system, including the death of a University of Iowa student. (New York Times)

Lesson not learned
Last year, teenager Ryan Lee, a former Lewis and Clark High School student, made threats on social media against some other LC students and was arrested. Yesterday, Lee was arrested again for basically the same exact thing. (KXLY)

Not in my city
Some Spokane Valley residents want to limit the number of duplexes, town homes and cottages in the city. (Spokesman-Review)