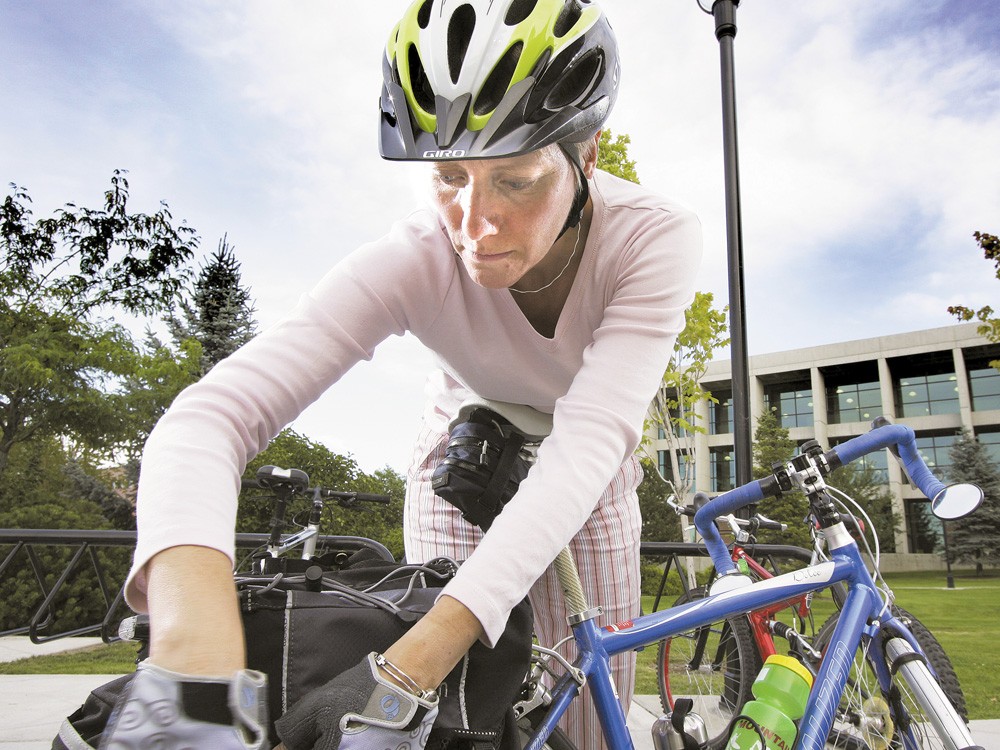 Young Kwak
Of plans for the U-District, Barb Chamberlain says, "It's cool see them all coming together this way."

If Spokane Mayor Mary Verner’s proposed budget remains unchanged by the City Council, 70 people in City Hall will lose their jobs at the end of this year.

The main reason for such a deep cut to city employees is not only the continuing bad state of the economy, but the unwillingness of any of the city’s eight unions to participate in budget negotiations, Verner said Monday as she handed her budget to the council.

“I had hoped to present a vastly different budget,” Verner said, speaking from prepared remarks. “But, thus far, no bargaining units have agreed to forgo pay raises and make changes to medical plans in order to save jobs.”

In all, 120 positions will be eliminated, but 50 are vacant due to a hiring freeze instituted by the mayor earlier this year. The deepest cuts come from the Police Department, which will lose 45 positions.

Spokane Police Guild President Ernie Wuthrich has reportedly said his union was unwilling to negotiate with the mayor or forgo pay raises, and would not open up their contract until it expires in 2012. (As the mayor plans the 2012 budget next year, the union will be in discussions.)

The Fire Department will lose 29 positions, the street department 14 and the building department seven. Beyond these, 18 other city departments could lose positions. The East Side Library and Fire Station No. 9 also face possible closure.

At an open house at WSU Spokane last week, leaders from several different though interlocking projects produced easels, nametags and snacks, and walked visitors through their collective utopian vision of the University District’s future.

On one side of the room, the Central City Transit Alternative Analysis showed off its progress: The community effort to create a downtown circulator has narrowed its options to either a streetcar, an electric trolley bus or an enhanced bus. It has also narrowed its route options to five possible paths, each of which aims to connect hubs like the medical district, the University District, Kendall Yards and downtown.

In another corner stood an enlarged aerial photo of the Division/ Browne corridor, which organizers hope to transform into a welcoming, pedestrian- and bike-friendly gateway to Spokane. The couplet would also serve as the crease between downtown and the University District.

East of that fold, business owners have been sprucing up East Sprague, in part because they hope the area will house students of a future four-year medical school at the U-District campus.

But many believe that won’t happen without a safe pedestrian bridge over the railroad tracks. Two visions for such a bridge stood on easels in the northwest corner of the room, before a giant projected animation swooping around 3-D images of each model. Open house participants shared their opinions on the bridges via sticky notes attached to a separate easel. (One malcontent posted “We need first more river crossings from GU to downtown” across several easels.) Both bridge models are assuming a future Martin Luther King Jr. Avenue (a prettified extension of Riverside into the University District).

Though progress has been made on each of these disparate projects, none (except the Sprague rehabilitation) have taken off yet, and each will face years of searching for funds. Still, the sight of so many separate groups planning together was a relative novelty in Spokane.

“It’s cool to see them all coming together this way,” says Barb Chamberlain, a spokeswoman for WSU Spokane. “Each project has its own logic and rationale, but they make even more sense when you put the pieces together.” (Joel Smith)

DISSOLUTION OF A UNION

The persisting aftershocks of 2008’s economic earthquakes continue to cause institutions to crumble.

A full two years after the crash, Union Credit Union closed. It’s the first credit union to close in Washington in more than 15 years.

Typically, credit unions dodged the major troubles that have dogged banks in the wake of the recession. Without shareholders, credit unions never expanded as aggressively — or as riskily — as banks. For the most part, real estate investment and construction loans were left to banks, not credit unions.

To make matters worse, right as the recession hit, Union Credit Union launched an aggressive campaign for more depositors. Assets grew — and so did liabilities, slashing their net-worth ratio in half.

Where a struggling bank could sell stock to recapitalize itself — that’s what Sterling Savings did — deeply floundering credit unions’ one hope would be to merge with a larger, healthier institution. “It’s getting harder to find merger partners,” Jekel says.

“When banks are closed, scam artists try to contact members, either by telephone or e-mail,” Jekel says. Nobody but a scammer’s going to call to ask for your account number, she says. (Daniel Walters)