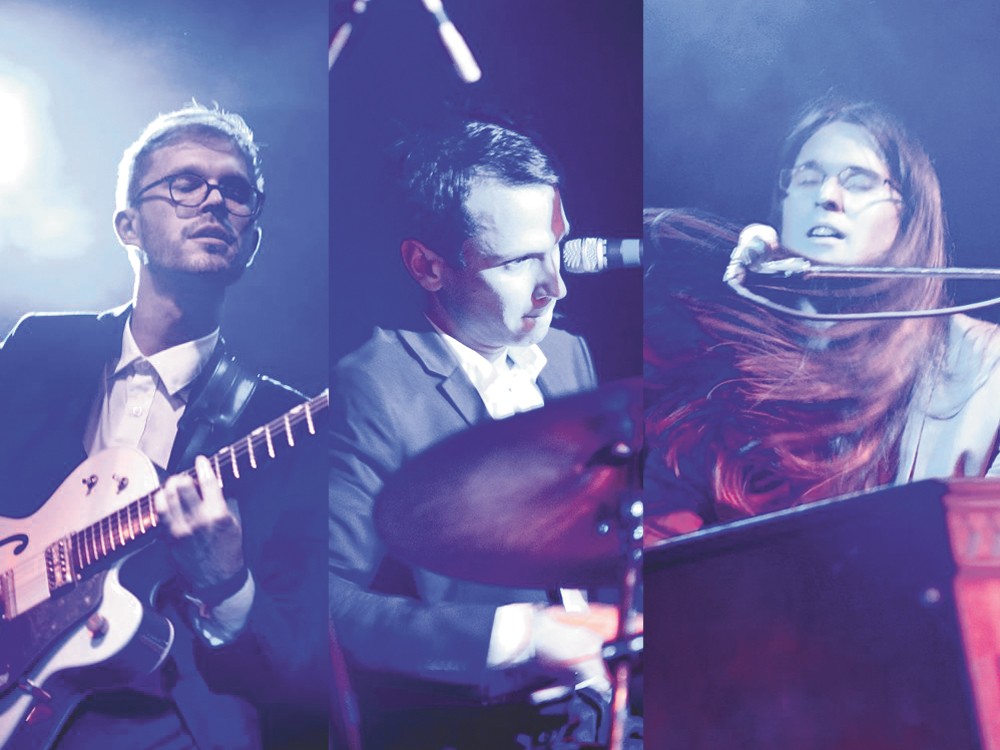 At the very center of Garage Voice’s music is a sound that inspires hallelujahs. It is the soundtrack to a million prayers, the sound that accompanies ladies across the Bible Belt as they sing with exaltation and fan their faces with church programs.

It’s the unmistakable sound of the Hammond organ: an instrument best known for backing gospel choirs and worship bands. But it’s one that has a long history with rock ‘n’ roll music: plinking along beside chugging guitars in Steppenwolf’s 1968 hit “Magic Carpet Ride,” punctuating the first notes in Tom Petty & the Heartbreakers’ “Refugee,” driving Iron Butterfly’s “In-A-Gadda-Da-Vida” entirely.

And it’s a sound that’s become essential to Seattle band Garage Voice. After bass player Bruce Pearson purchased a 70-year-old Hammond CV organ off Craigslist in 2010 and implemented the sound into its live show, he says the three-piece band knew “there was no turning back.”

“We call it the fourth member of the band,” Pearson says over the phone. “So much sound comes out of it. … I started the band as a bassist, and I hardly pick up the bass anymore.”

To get the signature Hammond B3 sound, Pearson upgraded his organ with a B3 preamp, percussion and smooth drawbars.

“Many of these organs sit in churches for decades and get ignored. People don’t realize that they’re some of the best keyboard instruments around,” he says. “Especially the non-B3 models. People are drawn to the Hammond B3, because it has the bigger name, so they suppose other models are inferior. That’s why they go unnoticed in churches.”

Up until they found the organ, Pearson says Garage Voice was wandering — constantly trying new sounds and styles. They were in a “genre crisis.”

“We’ve always had such a fondness for so many different types of music,” he says. “We would play a bossa nova song, then a progressive rock song… we had no idea what we were doing.”

After releasing an album in 2007 and completing a national tour, the members of Garage Voice — separately and as a band — started taking an interest in gospel music, old spiritual songs and 1960s soul music and, slowly, weaving some of those sounds into their own music.

“It was like an anchor to our music,” Pearson says.

With a more spiritual sound, the band found that its wandering eyes were suddenly still.

“There’s such a lure to old gospel and soul music in its simplicity,” Pearson says. “They’re community songs and something about the nature of the melody makes you want to sing along and helps you connect with what’s being sung in the first place. And I love that.”

Like those rock bands that came to the sounds of Jesus before them, on its new EP, The Messenger, Garage Voice layers complex guitar lines over lilting organs. When they stray into noodly solos, the organ is the constant stabilizer.

On that same album, the band keeps the Bible close — the first words of The Messenger are lifted from The Book of Psalms (“many are the afflictions of the righteous man, but the Lord he delivers from them all.”). But just because they sing verses doesn’t mean this is a Christian rock band, Pearson explicitly points out. This is gospel music, and they’re simply respecting its origins.

“Doing the whole old gospel thing, it’s not just novelty music to us,” he says. “I feel like the best way [we] can excel as artists, as musicians, is to find the tradition that we understand the most and to continue that.”