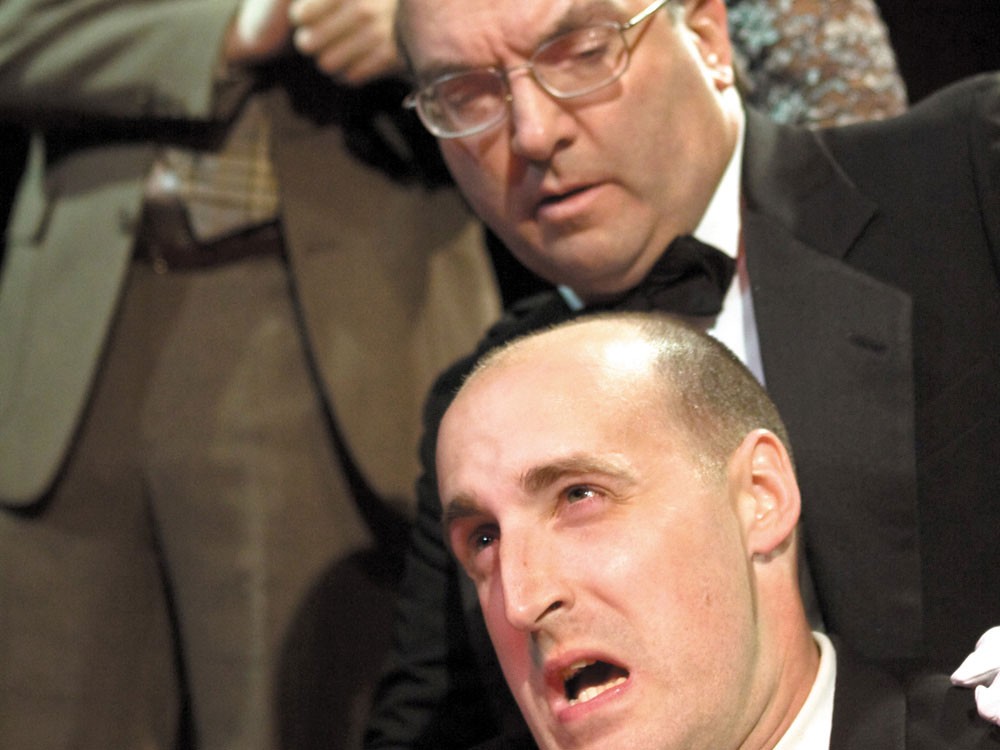 The 39 Steps
Through Oct. 30
Interplayers

An innocent man gets himself ensnared in international intrigue, chased over loch and heather (he’s in Scotland, you see) by policemen and skeptics and double agents. Of course, we never actually think that our hero, the dapper Richard Hannay (Damon Mentzer), is going to succumb to the nefarious forces that encircle him — he has such an awfully dashing mustache, don’t you know — but we’re never entirely sure how he’s going to escape, either.

And it’s a hoot. When a newsboy transforms into a bobby with nightstick and then a traveling underwear salesman — all with switched hats and accents — it’s a delightful, jack-in-the-box surprise. When Jerry Sciarrio (in one of several dozen roles) transitions from a dignified lord of the manor to a goose-stepping Nazi, the threat’s rendered comic and harmless even as we giggle over the actor’s venture into make-believe. Things happen fast, and we’re invited to join in the fun: chairs become car seats, picture frames are held up to become escape hatches, audience members are invited onstage while an overworked actor rests for a while in a front-row seat.

But fussing with props and over-indulging in sound gags can impede the comedy: Bad guys are pursuing an innocent man! And he’ll tell you all about it, just as soon as this other guy puts on a wig and a dress! And the stage crew drags on some furniture! And let’s throw in some silly sound effects too!

When director William C. Marlowe camps up the proceedings with a disco ball or the Jeopardy theme, it’s funny — but funny in terms other than the show itself is funny. And Patrick Barlow’s frenzied adaptation of Hitch’s movie has plenty of laughs to offer all on its own, thank you very much indeed, sir.

In fact, the biggest laughs in Interplayers’ production of The 39 Steps — and there are many bright spots in this show — land not because of all the wigs and props and furniture, but because of the acting. In the three-way role of femme fatale, innocent farmer’s wife and skeptical love interest, Elisha Gunn is a particular revelation. With the opening scene’s German woman of mystery, Gunn wrests multiple meanings out of single words: When she comes on to Hannay, she turns the final three syllables of “You wish to be — in-VOL-ved?” into a symphony of seduction, rubbing her thigh once up, once down. She rolls the R’s in “Richard” for so long that his name seems to tumble out the door and come back in again.

As the nave Hannay, Mentzer has a pipe-clenched-in-teeth, grinning quality that lives just down the block from Dudley Do-Right. And the two clowns generate a lot of verbal jokery: Abdallah does both ends of a phone conversation, then makes two different characters comically unintelligible; Sciarrio switches from doddering hotel keeper to insane Aryan, then imitates the ignition-cough of a ’30s clunker.

Marlowe’s 39 Steps is creative, inventive and rollicking. It just needs some editing: Sometimes, the gags need to be gagged.