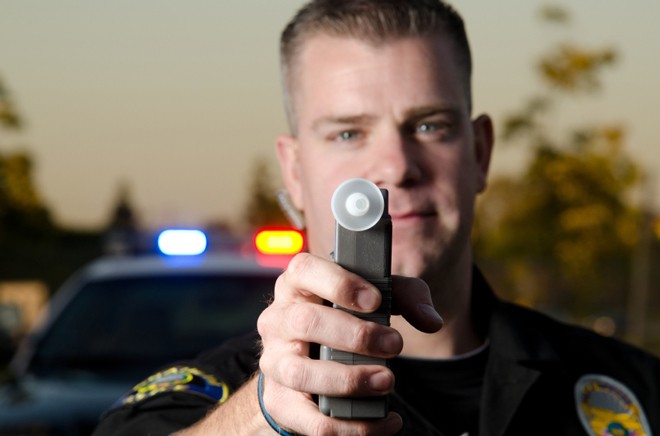 Are drug breathalyzers on the way?

LAW | Police officers in Washington state may soon have a new tool at their disposal to bust drivers under the influence of marijuana: a drug breathalyzer. As reported by R&D Magazine, a research team at Washington State University's Department of Chemistry has developed a method of measuring THC on the breath using ion mobility spectrometry, which has traditionally been used to detect evidence of chemical warfare. The study, led by Professor Herbert Hill, obtained results from 15 student volunteers that proved accurate in 80 percent of instances.

Hill hopes further refinement will lead to a roadside-ready application within a year. The race is on: Pot breathalyzer devices have also been designed and tested by start-ups in Oakland and Vancouver, a Colorado company that already makes alcohol breathalyzers and by researchers at Stanford University, but none have been formally adopted by law enforcement agencies.

Not everyone is convinced of their efficacy, given the subjectivity of impairment limits. As Columbia University professor Carl Hart told the Atlantic last year, "[With marijuana] we have no idea what's in the brain based on some measure in your mouth or in your lungs."

JOBS | Should the U.S. military be hiring people who have admitted past use of marijuana, even though it remains illegal federally? "It's an important question," said Secretary of Defense Ash Carter at TechCrunch's Disrupt event in San Francisco last week, "and the answer is yes, we can be flexible in that regard, and we need to."

His comment seems to acknowledge a report released last year by the Department of Justice that found "the recruitment and retention of cyber personnel" by the FBI to be an "ongoing challenge," i.e., the best hackers enjoy getting high and we can't hire them because of a thorough background check that excludes any candidate who has ingested cannabis within the past three years. FBI Director James Comey predicted such a dilemma in 2014 at an annual conference called the White Collar Crime Institute when he admitted, "I have to hire a great workforce to compete with those cybercriminals, and some of those kids want to smoke weed on the way to the interview."

Where do the stoners, denied consideration and rejected in D.C., turn? Two state election databases were hacked in August, says the FBI, fueling concerns that the November election is vulnerable to cyberattacks by domestic or foreign (ahem, Russian) entities. If you can't beat 'em, join 'em. ♦