Bellwether Brewing Co. gets creative with its concept and its beers 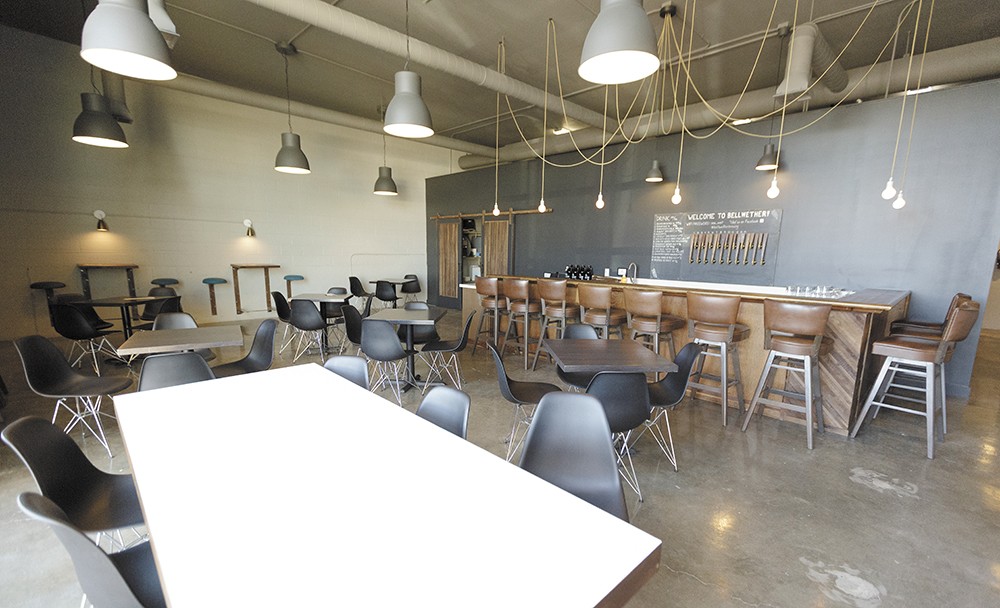 David Musser and Thomas Croskrey were not likely candidates

to start a craft brewery.

First off, both grew up in strictly religious families that looked down on drinking beer, or any alcohol. Neither of them had even really started drinking beer until well into their 20s. Add the fact that Musser is the pastor of his church, and it seems all the less probable that the two childhood friends would be the proprietors of Bellwether Brewing Co.

Nevertheless, on a recent Thursday afternoon, Musser has rolled up the garage-style door to the shop to let the freakishly warm mid-October air into the recently remodeled space on Monroe Street in the Emerson-Garfield neighborhood. Musser pours beers for the post-work crowd trickling in, while Croskey hustles in and out of the brewing space on the other side of the wall.

It's essentially been a two-man show since they opened at the end of September. The two, both fathers to young children, are fully realizing what it means to run a brewery. There are, however, little things that make the long days and subsequent long weeks worthwhile, they say.

"It's been fun to be at the bar and two different people will come in, and I'll be talking with them. But then I'll leave, and then those two people are talking to each other when I come back," says Musser, sipping on the brewery's first public batch of Fibber McGee's IPA.

"We don't have TVs in here," adds Croskrey. "We want people to have fellowship here. To come in and get to know each other." 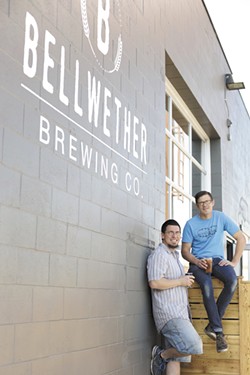 Bellwether Brewing, in some ways, happened almost without the pair fully realizing what they were getting into. They'd known each other since elementary school, but didn't start hanging out frequently until a couple years ago, when Croskrey, brewing up to eight batches of his own beer at home by then, had floated the idea of a brewery. The seed of an idea germinated more quickly than expected.

"The next thing we knew, we had a business license," interjects Croskrey.

"And I was just like, well, I guess we're doing this," says Musser.

Musser's wife, Brianna, is an interior designer. She was able to draw up the plans, design and create the lighting, and do everything else that turned the brick building into the modern taproom it is today. Her father and Musser did a lot of the labor in building out the taproom, relying on only a little hired help. The result is a sleek yet warm environment that Bellwether has made welcoming to big groups. Considering their own family life, it's all kid-friendly.

The friendly, community spirit is key for the two, particularly for Musser, who helped found and continues to organize the Emerson Garfield Farmers' Market, just a few blocks from the brewery. The friendly vibe was part of the plan from day one, he says, especially considering that Musser uses the brewery as a meeting space for his church, Altar, and its 30-some members. He's quick to point out that the brewery is not a church — they just happen to use the space — but it's a chance, nevertheless, to correct some misconceptions along the way.

"We're breaking a lot of those stereotypes about Christians. You know, Jesus made great wine," says Musser.

The beer at Bellwether — made on a tiny 1.5-barrel system with five 5-barrel fermenters — breaks from its contemporaries in the region, in that about half of the roster could be called "old-world" beers. This typically means mead variations, braggot, heather and other styles that originated in Europe. These brews shy away from hops in favor of maltier flavors that often employ honey in the process.

"I'm kind of a history dork, especially with British, Celtic, Viking history. I was reading into some of that, and I realized that a lot of people hadn't had braggot or heather," says Croskrey.

The other half of the lineup consists of what you could call Northwest-style beers, including three stouts, pales and IPAs. The crisp yet full-bodied Stargazer's Rye ale stands out on the Northwest side, but visitors would be remiss to not at least take a sip of the Seawolf braggot. It's different, especially on the back end, but the subtle sweetness balances out the bold flavors.

"There's a historic angle to it, but we're also a Northwest-style brewery," says Croskrey. ♦