CONCERT ANNOUNCEMENT: KISS are returning to Spokane on Feb. 4 for their last-ever tour 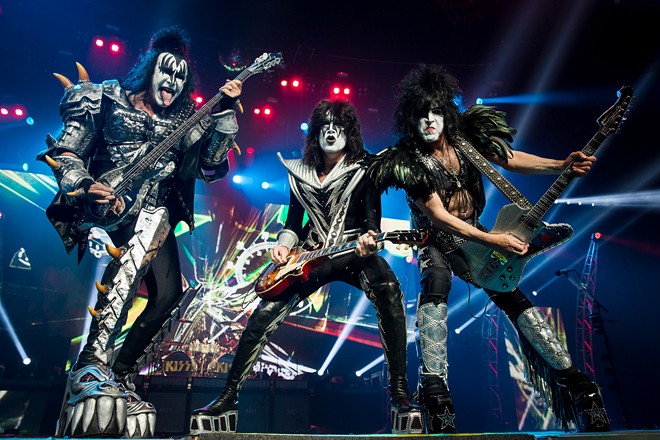 Shout it out loud, KISS Army: The hell-raising, flame-spitting Rock & Roll Hall of Fame inductees are returning to the Spokane Arena on Feb. 4. The Inland Northwest will be one of the first stops on the band's so-called End of the Road tour, which they're claiming is their last.

Can we really take their word for it? Well, the last time KISS blew through town in 2016, Gene Simmons told us that he thought the end was in sight. Either way, you won't wanna chance it if the one-time Phantom of the Park stars have been on your live-music bucket list.

Known for stadium-shaking hits like "Rock and Roll All Nite," "Shout It Out Loud" and, uh, "Beth," KISS became a merchandising juggernaut after developing their eye-popping aesthetic and outrageous live show in the 1970s. Founding members Gene Simmons and Paul Stanley are still donning that white-and-black makeup all these years later, and longtime touring members Eric Singer and Tommy Thayer are hardly slouches, either.

Tickets for the Spokane show go on sale this Friday, Nov. 2, at 10 am through the Arena box office and all TicketsWest outlets, and at (800) 325-SEAT.