CONCERT ANNOUNCEMENTS: Sleater-Kinney, Pig Out in the Park and Mike Watt 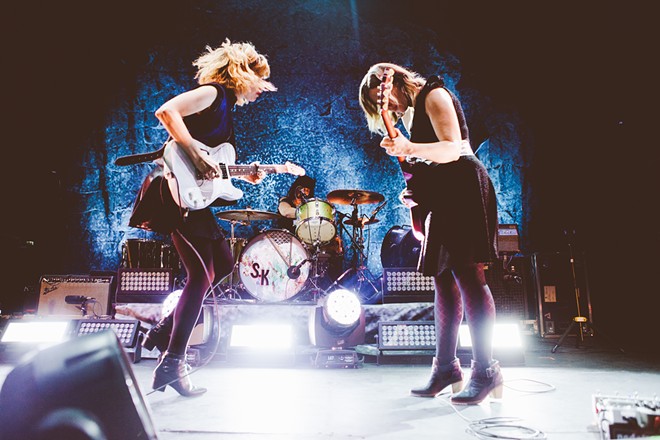 Jason Williamson
Sleater-Kinney return to Spokane to kick off their latest tour on Oct. 8.

As we start our headlong dive into the deep end of summer, the live music announcements are still coming at us thick and fast.

In case you missed it, the list of Pig Out in the Park headliners landed, and now we're looking forward to all those free concerts in Riverfront Park over Labor Day weekend. (All the deep-fried food, too.) Coolio was announced as a headliner back in January; the "Gangsta's Paradise" rapper will perform Aug. 30. Also on the lineup is former Creed frontman Scott Stapp (Aug. 29), Southern rockers Black Oak Arkansas (Aug. 31) and PNW power-pop legends the Posies (Sept. 1). And that's not to mention the stacked roster of local performers, including Too Slim and the Taildraggers, Super Sparkle and Sammy Eubanks. Expect a full day-by-day schedule later in the summer.

When Sleater-Kinney reunited back in 2015, they played their first show in nearly a decade right here in Spokane. We must've made an impression, because they're once again kicking off a tour in the Inland Northwest, this time at the Fox Theater on Oct. 9. The trio of Corin Tucker, Carrie Brownstein and Janet Weiss also released a new single, produced by St. Vincent,  titled "Hurry On Home" alongside today's tour announcement; more new music is said to be coming soon. Tickets go on sale Friday, June 14 through TicketsWest. Tickets range from $35.50-$42.

And more good news for you old-school rockers: Mike Watt, perhaps best known as the bassist/co-founder of seminal punk band the Minutemen, is bringing his band the Missingmen to Lucky You Lounge on Sept. 25. Watt is known as much for his influential bass technique as for his litany of post-Minutemen side projects, including fIREHOSE, Dos and a stint with the Stooges. Tickets go on sale Friday, May 31. Tickets are $20 in advance.

Too Slim and The Taildraggers @ John's Alley