Who knew that the Punch Brothers' origin story actually has Spokane as one of its locations?

That was news to me, along with probably most of the people at the acoustic aces' show at the Bing Crosby Theater Wednesday night. Banjo man Noam Pikelny told the story nearly halfway through a remarkable show of stirring musicianship and good vibes courtesy of frontman Chris Thile and the rest of the quintet.

As Pikelny told it, he grew up in Chicago as a massive Cubs fan — so much of a fan that he cajoled his family to visit the hometown of his favorite player one summer when he was a kid. That player? Spokane's own Ryne Sandberg, a North Central grad and the Hall of Fame second basemen of the '80s-era Cubbies. The road trip tale was a bonding moment between Pikelny and Thile when they first met, leading to the Punch Brothers' formation (at least for the purposes of this stage tale).

Like most of the between-song banter, Pikelny's story had both the band and audience laughing together. Humor is a definite weapon of the Punch Brothers, both on stage and on songs like the satirical "Jumbo," one of Wednesday's highlights. 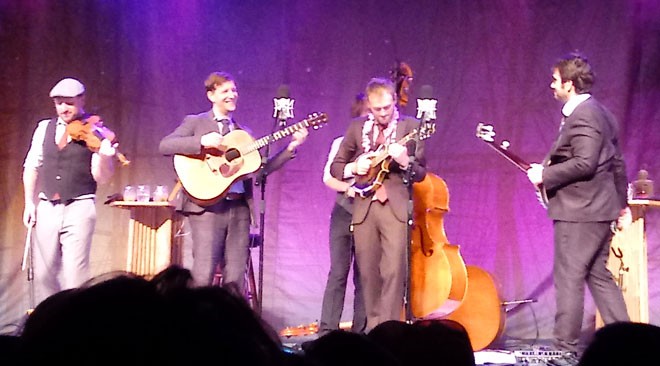 The bigger weapon, though, is the collective skill the Brothers wield at their respective instruments. Thile is a wicked mandolin player, Pikelny is the same on banjo, and Chris Eldridge's guitar, Gabe Witcher's fiddle and Paul Kowert's bass all together make the band one of the most entertaining to watch and hear perform in the last 10 or 15 years. Throw in some remarkable vocals — whether we're talking about Thile's lead parts or the others' exquisite harmonies — and you have a crew virtually unparalleled in their chops.

Wednesday's show lasted nearly 20 songs over the course of nearly two hours, and leaned heavily on the band's excellent new album All Ashore. While Thile, adorned in a lei throughout, cracked jokes about tiki drinks, and all the band enjoyed a cocktail or two over the course of the show, the intricacy of Punch Brothers' arrangements is nothing less than astounding.

As an audience member, it was easy to zero in on one player and get lost in his playing, only to hear another player echoing his parts, or responding with some fiery notes of his own, taking your focus from, say, the fiddle to the banjo, and then to the mandolin.

In a show full of highlights, the early instrumental "Watch 'at Breakdown" and "This Girl" were both excellent, as was the mid-show run through three All Ashore songs: "Three Dots and a Dash," "Just Look At This Mess" and "Jumbo."

The cover of Josh Ritter's "Another New World" was a nice surprise, and the set-closing run through "Julep," "Jungle Bird" (a tiki cocktail that Thile shared the recipe to), "It's All Part of the Plan" and the multi-faceted wonder "Like It's Going Out of Style" had the ground on its feet and vociferously cheering as the band took its bows. An encore of "The Hops of Guldenberg" was a fine nightcap, too.

Throughout the show, Thile talked about how much fun he was having and how the Punch Brothers need to stop in Spokane more often. They'll get no argument from me.