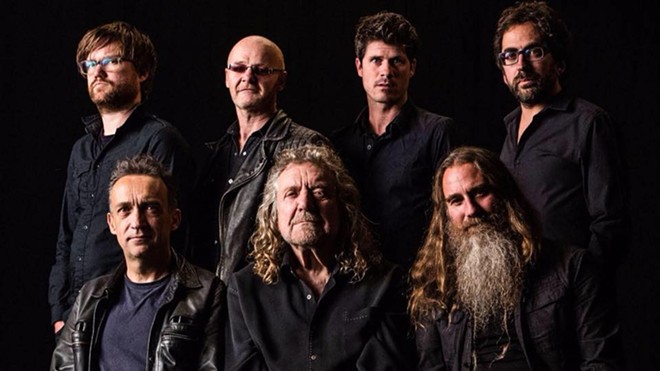 Robert Plant and his Sensational Space Shifters
The best thing about Robert Plant's epic show Sunday night in Spokane wasn't the fact Led Zeppelin songs filled half the set list, although that was certainly thrilling.

Rather, it was the fact the 71-year-old rock god didn't try to simply replicate those songs in their original, bombastic forms, instead reworking and reconsidering them through the ample hands of his excellent band the Sensational Space Shifters. That meant that in place of the electrified riff-rock of Zeppelin's Jimmy Page or the Middle Eastern-tinged accents that Plant favored early in his solo career, the audience was treated to a night full of banjos, fiddles and acoustic guitars that showcased Plant's interest in American folk and roots music.

Not that there was any shortage of ass-kicking electricity, too — guitarists Justin Adams and Liam "Skin" Tyson made sure of that, trading scorching solos here and there on several songs over the course of the night (the show-closing "Ramble On," an excellent take on "Babe, I'm Gonna Leave You").  Likewise, keyboard man John Baggott fleshed out the sound with brilliant flourishes whether on the delicate show opener "The Rain Song," the atmospheric solo hit "In the Mood" or stunning "Bluebirds Over the Mountain," which featured Plant sharing vocals with fiddler and the night's opening act Lillie Mae.

While plenty of legacy acts are on the road knocking out the hits to both great effect (Rolling Stones, Paul McCartney) and not-so-great effect (check your local state fair schedule), Plant shuns doing a rote Led Zep cash grab in favor of playing new music he's passionate about along with those reworked classics. The result was a killer show that stretched 12 songs over an hour and 40 minutes and never felt boring or overly jammy. The only bummer all night I can think of was the booing of pinheads in the audience when Plant played a video of teen climate activist Greta Thunberg before he and the band took the stage.


Even in his eighth decade, Plant still has moves that rabid viewers of The Song Remains the Same VHS tapes can recognize — as the band opened with "The Rain Song," Plant dramatically kicked his microphone stand skyward as the song moved from its gentle introductory passages into a kaleidoscopic aural wonder. He shimmied to the blues of Bukka White's "Fixin' To Die" and told stories of discovering the Stanley Brothers' version of old American traditional "Little Maggie" before leading his band through a bluegrassy workout of same.

Plant turned the spotlight to his stellar band often, but there was no taking your eyes off him and his recognizable mane — even as it's now streaked with gray and accompanied by a grizzled beard. He cracked jokes, told stories and, most importantly, his voice sounded great even if he's not going after the stratospheric high notes of his youth.

I bought tickets to Plant's show because I'd never seen him and didn't know if I'd ever get the chance again. After watching him at the First Interstate Center for the Arts, it seems like there's plenty of music to come from Plant. I'd definitely buy a ticket again, any time.