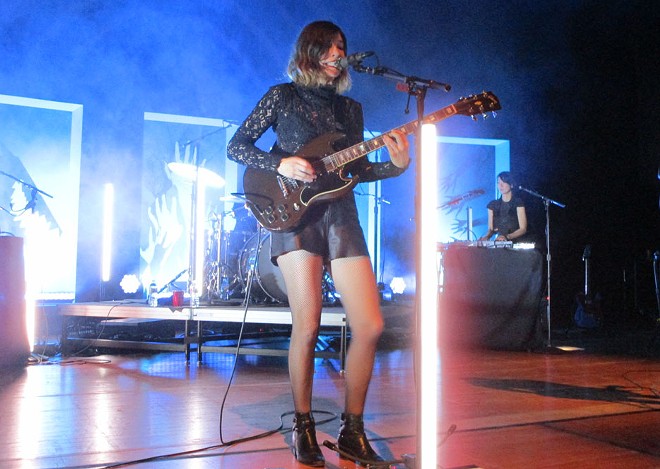 Dan Nailen photo
Carrie Brownstein now uses a light saber as a mic stand. Fierce!
If there was any doubt after listening to Sleater-Kinney's expansive new album The Center Won't Hold, the band's tour-opening show Wednesday at the Fox Theater showed that this stage of the band's career is arguably its most ambitious.

Just as the new St. Vincent-produced album sounds bigger and bolder than previous releases thanks to shades of industrial noise and bombastic synth-pop, Sleater-Kinney's live show is a dramatic leap from the past. A massive stage backdrop, five screens projecting various images behind the band, and dramatic lighting effects made it feel like Sleater-Kinney could be pretty comfortable in arena-sized venues.


Of course, the fact the Fox was probably about two-thirds full means it could be a challenge for the indie-rock heroes to find a much bigger audience, especially given the divisiveness of fan reaction to the band's new songs, and to the departure of longtime drummer Janet Weiss this summer. But fans considering staying away from this new version of Sleater-Kinney are making a mistake, because their ambitious turn also turns out to be a winning one when Carrie Brownstein and Corin Tucker take the stage with their new backing band. 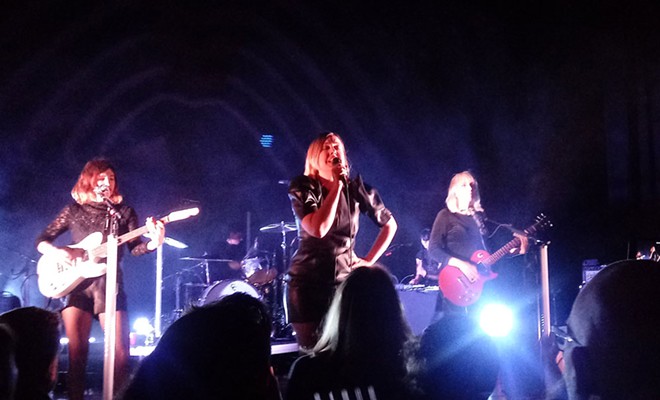 Dan Nailen photo
Corin Tucker set aside her guitar to lead the band through new single "Animal."
The Center Won't Hold takes center stage on this tour, and for the most part the new songs are better live than on record. Much of that credit goes to multi-instrumentalists Katie Harkin and Toko Yasuda, as well as drummer Angie Boylan, who was rock-solid in an impossible spot replacing Weiss' powerhouse playing. The dexterity of those three, instrumentally and providing harmony vocals, gave Brownstein and Tucker the ability to really shine out front, confident in the new songs. And that's good, because Sleater-Kinney played 10 of the 11 tracks from The Center Won't Hold over the course of the night, including the show-opening title track and its frisky Brownstein follow-up "Hurry On Home."

The biggest surprise of the night was how good the songs from the band's 2015 album No Cities To Love have aged. That album marked the band's reunion after nearly a decade apart, and their tour stop at the Knitting Factory was a brilliant celebration that happened to have a new album along for the ride (as well as show-opener Lizzo get introduced to Spokane). Four years later, songs like "Bury Our Friends," "A New Wave" and "No Cities to Love" are muscular workouts that sound like they've been in the band's repertoire for years. All three arrived in the first seven songs of the show.

Dan Nailen photo
Carrie Brownstein's humor came through in her between-song banter.
The disappointing attendance didn't seem to have any effect on the band, with Brownstein doing her full slate of rock-move calisthenics and trading big grins with Tucker. Right at the start Brownstein called the crowd down to gather close to the stage — that was definitely the best spot to feel the energetic vibe of a rock show compared to sitting in a half-empty row in the back of the house. She also chatted up the crowd about her newly torn stage attire and Spokane's obsessive talk about the weather (Sleater-Kinney arrived the day after an unusually early snowstorm). She also said the night's informal nature "is our favorite kind of show, actually. We'll try to keep our cool later in the tour."

Fans hoping for a heavy dose of the band's older works like Dig Me Out or The Hot Rock probably left a bit disappointed, but Sleater-Kinney dropped select older nuggets throughout after the show reached its halfway point, from a monstrous "Ironclad" to the buoyant "Words and Guitar" to the most excellent "Step Aside." Tucker put away her guitar to lead the band through their scream-y new single "Animal," and Brownstein closed the set with a winning "Entertain." A brief three-song encore of "Broken," "Start Together" and "Modern Girl" closed it down.

Dan Nailen photo
Sleater-Kinney used lighting — and lack of lighting — to dramatic effect.
If it's the last time Sleater-Kinney opens a tour in Spokane, it was a worthy show. Or, if the band's ambitions are eventually equalled by the interest from fans new and old, maybe they'll hit the Spokane Arena four years down the line. 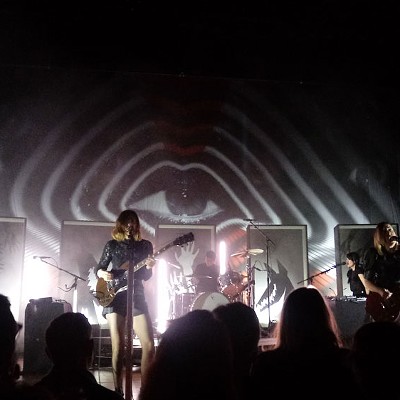 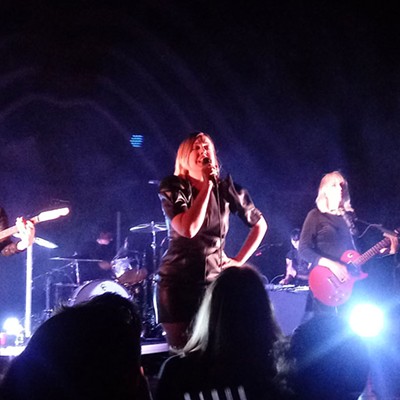 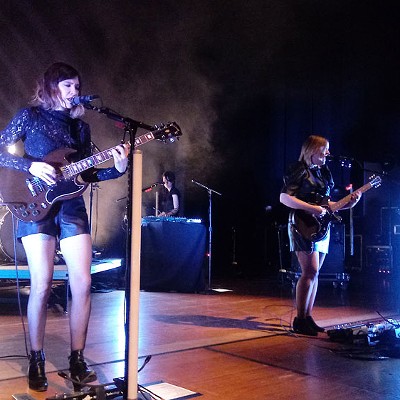