Confessions of a Cat Lady

How I became completely obsessed with the feline species 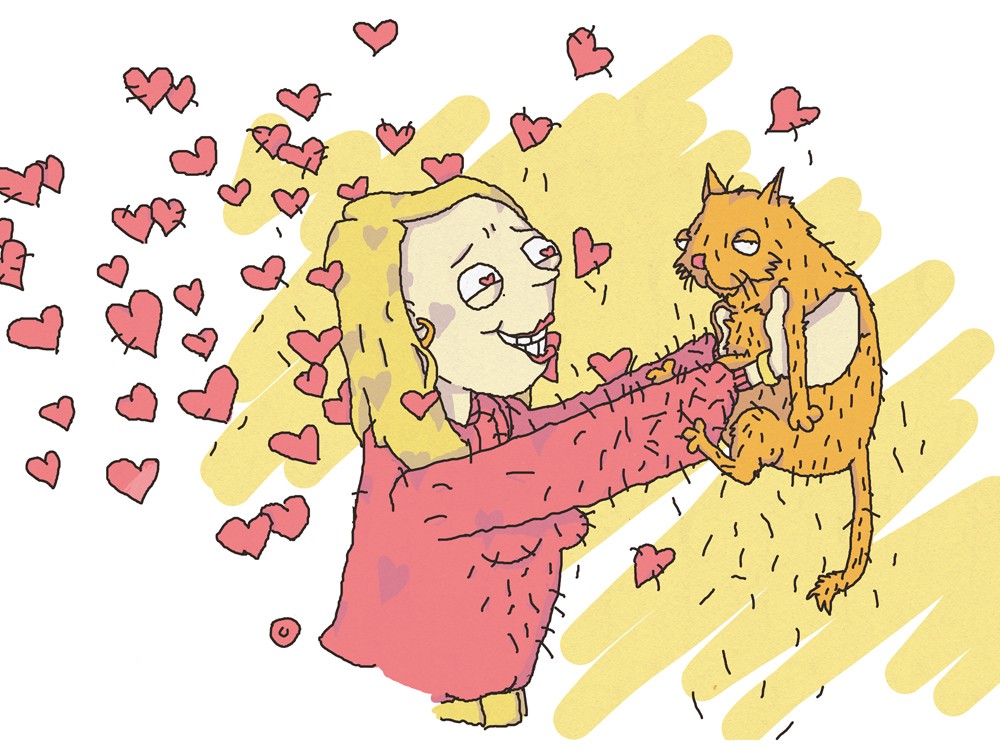 Years ago, when friends would joke that I was a “crazy cat lady,” I’d get defensive. Honestly, I’m not some frazzle-haired, anti-social woman with a fur-covered, claw-shredded muumuu dress and dozens of hungry cats swarming my ankles. (OK, I do own 10 or so cat-themed shirts, but none — I swear! — are tacky, baggy sweaters with embroidered kittens all over them.)

Still, people liken me to cat-crazed Angela from The Office. I cringe to admit I’ve also been compared to that nutty, crying girl in the eHarmony profile video spoof. You know the one on YouTube with the girl sobbing hysterically, “I really love cats and I just want to hug all of them...”

I wasn’t always so in love with cats.

When I was a kid, it was my younger sister, Erica, who was absolutely bat-shit crazy about them. In about the second grade, she staunchly insisted that everyone call her by the self-proclaimed moniker “Ericat.”

Growing up on rural acreage about 25 miles northwest of Spokane, the cats we had as kids were charged with living outside to be mousers in the wood shed. When one — we had a total of five over the years — didn’t show up for dinner for days on end, Erica would be the one with tears streaming down her face. R.I.P. Soot, Spot, Caesar, Chester and James.

Years later, though, one little tabby cat changed everything for me.

We found Alice at our local post office one rainy, cold December night. Andrew, my younger brother, and Erica spotted her — just a kitten — shivering and soaked under the big, blue letter drop box. Alice became our first indoor-only cat because, after losing so many to the unknown fates of country living, my mom had a change of heart and let Alice live in the house with us.

With Alice around 24/7, I quickly became familiar with the many endearing (and also not-so cute) quirks of cats — things I’d entirely missed or ignored in her outdoor-dwelling predecessors. She was — and still is, even at 9 years old — small, playful and really, really flippin’ cute. She’s so cute she could be in a cat food commercial.

Alice is also a very vocal cat, and she mews and trills constantly. Sometimes she’ll actually have “conversations” with me. The bond I’ve formed with her is stronger than what I have with most people. Other pet lovers understand what I’m talking about.

Intensifying my cat-craziness was a decision about a year-and-a-half ago — largely influenced by my love for Alice — to become a “Cuddle Crew” volunteer, working with the cats at the Spokane Humane Society.

Since I started working with the shelter kitties, I’ve been bit, scratched, swatted and hissed at more times than I can count. But I’ve also bottle-fed tiny, newborn motherless kittens — which tops the list of best cat experiences ever.

During one of my first volunteer shifts, a very pissed-off cat I was brushing actually pooped on me. Definitely one of the worst cat experiences, but I still went back to the shelter.

And I stopped caring a while ago about what people think of my obsession with cats. Of course I have a “365 Cats a Year” calendar at my cubicle and a picture of Alice is rarely not my desktop background. And so what if I post an average of five or six cat-related links or photos a day on my Facebook. People probably have un-friended me for it, but if they don’t like cats, I don’t really care.