Mitch Ryals photos
Maddie (top left) waits on a boat on Lake Coeur d'Alene for someone to throw the ball again.

My first dip into the life of a dog sitter started with a 5-year-old black lab named Maddie, who plays fetch for hours and still fancies herself a lap dog. None have been more memorable than her.

My girlfriend and I were new to Spokane, and we learned the hard way that we weren't ready to be full-time dog parents.

Yet, determined to surround ourselves with fur and slobber and panting, we decided being a dog aunt and uncle could be a good gig. Plus, we'd get paid. Win-win.

We set up a profile with Seattle-based company Rover, which connects pet owners with sitters. The company has since opened a second office in downtown Spokane where they have about 75 employees and are looking to hire more, says Jennifer Summers, Rover's director of safety and enforcement.

Rover also provides insurance and 24/7 emergency support, staffed by veterinary technicians, in case something goes wrong. Since 2012, 11,000 owners, sitters and dog walkers have connected in Spokane through Rover, according to numbers provided by the company.

Within a couple weeks, Maddie was lounging between us on the couch and rooting through our trash while her owners vacationed in Banff, Alberta.

She has a sweet personality, and a rambunctious spirit — not unexpected from a Labrador retriever. Considering the quirks of the other canines in our keep over the years, she was pretty easy to care for.

There was Hemi and Nitro, the pair of white bichon terriers who fed off of each other's mischievous inclinations; furniture scratched, barf on the carpet.

Ozzie (the golden retriever, not the sheriff) couldn't help but smile when we walked into the room. His nose wrinkled up showing a big, toothy grin. Fur everywhere.

There was Marcel, the French bulldog who I'm pretty sure can bench press as much as me, and ran circles around everyone at the dog park. After his owner dropped him off, I quickly learned that he'd figured out how to, uh, pleasure himself with his front paws. Not kidding. I made sure to give him enough alone time.

Rocket, the whippet, is fueled by cottage cheese and made it his business to tree any squirrel who dared cross him on a walk. Super fast, but also a little lazy.

Then there's Sam, the border collie and Kerry blue terrier mix, who looks like a muppet. One hungover morning, I ignored his pleas to be let out at 5:30 am, and he repaid me by letting loose a puddle of soupy green-brown shit all over my yoga mat. Lesson learned, Sam.

That's not even the half of them. But still, of all the furry friends who stayed with us, Maddie stands out. A good dog (except for the trash thing; she loves trash), but that's not what puts her ahead of the rest.

Through Maddie, we met her owners, and they became some of our first friends in Spokane. Now, we have dinners together, take hikes and go on trips, usually with Maddie wagging her tail not far behind.

Dog sitting has taught me a few lessons: Don't delay when a dog tells you it's time to go out, and if you throw the ball once, be ready to throw it at least 20 more times. But more than any other lesson, I know that dogs make great friends and so do their people.♦

The original print version of this article was headlined "Dog Uncle" 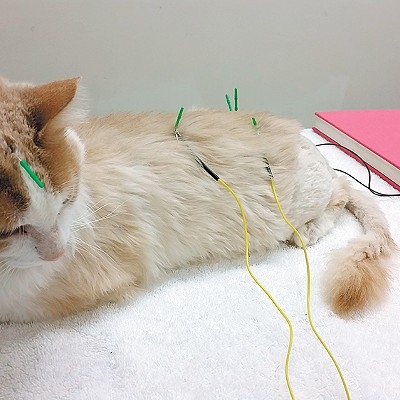