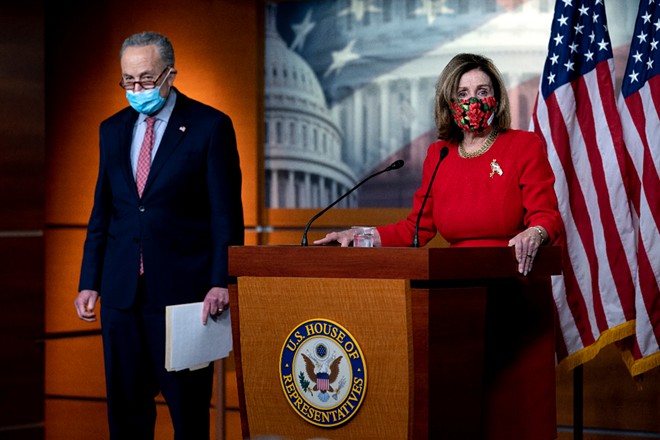 WASHINGTON — Congressional leaders on Sunday reached a hard-fought agreement on a $900 billion stimulus package that would send immediate aid to Americans and businesses to help them cope with the economic devastation of the pandemic and fund the distribution of vaccines.

The deal would deliver the first significant infusion of federal dollars into the economy since April, as negotiators broke through months of partisan gridlock that had scuttled earlier talks, leaving millions of Americans and businesses without federal help as the pandemic raged. While the plan is roughly half the size of the $2.2 trillion stimulus law enacted in March, it is one of the largest relief packages in modern history.

“We can finally report what our nation has needed to hear for a very long time,” Sen. Mitch McConnell, R-Ky., the majority leader, said Sunday night. “More help is on the way.”

It was expected to be merged with a sweeping catchall spending measure that would keep the government funded for the remainder of the fiscal year, creating a $2.3 trillion behemoth whose passage will be Congress’ last substantive legislative achievement before adjourning for the year. The deal came together after a weekend of frenzied negotiating only hours before the government was set to run out of funding and two weeks before the next Congress was to convene on Jan. 3.

Still, even as it prepared to pass a consequential measure, Congress was at the peak of its dysfunction, having left so little time to complete it that lawmakers faced a series of contortions to get it across the finish line. With additional time needed to transform their agreement into legislative text, both chambers had to approve a one-day stopgap spending bill — their third such temporary extension the past 10 days — to avoid a government shutdown while they were finalizing the deal.

Both chambers approved the measure on Sunday night, and President Donald Trump signed it shortly before midnight. Final votes on the spending package were expected as early as Monday to approve it and clear it for Trump’s signature, but had yet to be scheduled.