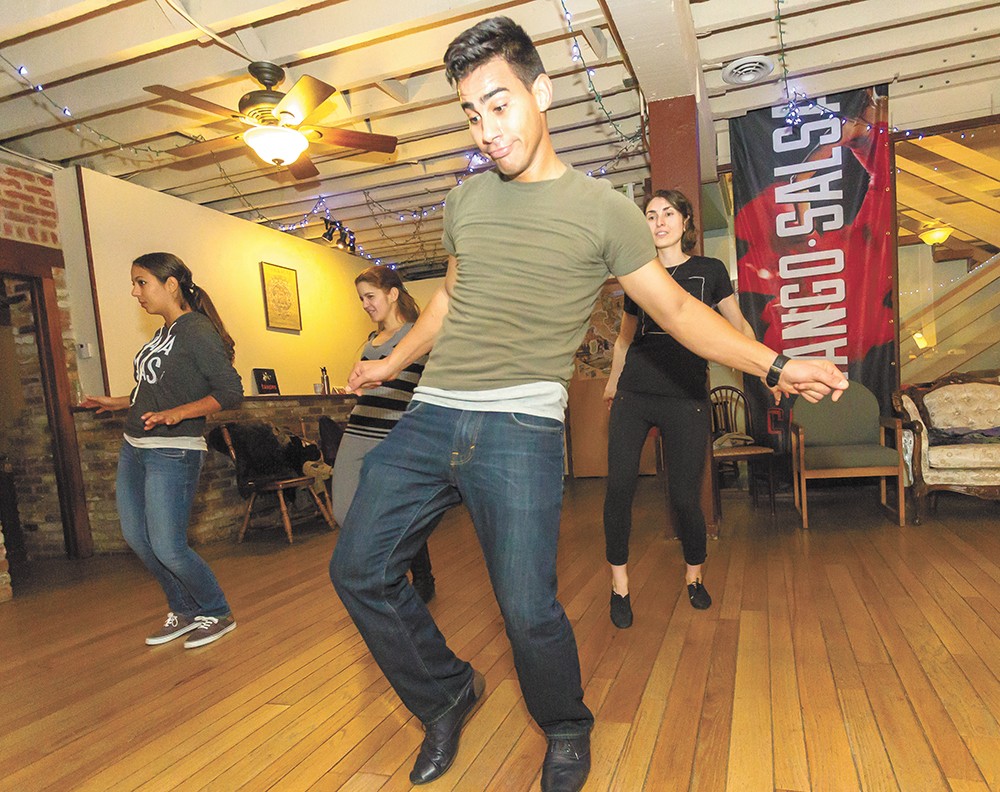 It's as if no one else is in the room.

Dancing cheek to cheek at the downtown Satori studio, the feet of Mario Garcia and Deanna Davidson shuffle across the hardwood floor, weaving and turning through steps. The couple, both in their 50s, feel the slow and sensual tango in unison, breathing through the movement. It was dance that brought them together.

"I saw her that first day at class. She was putting on her shoes, not even looking at me, and that was it," recalls Garcia, originally from Cuba.

They tangoed down the wedding aisle as man and wife five years ago.

Satori owner Victor Smith is quite proud of the multiple matches made through his classes, though he claims not to be a matchmaker. Tonight, there's light, warmth and hot tea to be had in this basement space — hard to come by in a city that's just been pummeled by a near-hurricane-level windstorm. Only the faithful have arrived tonight, which was scheduled for a Spanish and salsa lesson.

Language paired with dance is something Smith has concocted, he says. There are no other studios offering simultaneous language and dance classes. On a normal evening, he'd play a Spanish language song, break down the meaning and the grammar and then eventually have everyone dance to the tune.

"People can just do the dance, but to understand the culture, we must break down the language as well," Smith says.

Smith's philosophy is all about having that light bulb moment ("Satori" is a Buddhist term for enlightenment) of the feel of the dance, rather than a rigid memorization of steps. Strict ballroom dance is about using the woman to show off, Smith says, but the salsa and Argentine tango are supposed to make the woman feel safe and beautiful. The focus should be on each other, not the audience.

In general, Smith wants to create a safe space for all, like on weekend club nights when people from all nationalities come to dance. Satori is an 18-and-up establishment and there's no alcohol.

"If you want to meet a woman with a few drinks in you, you can do that anywhere else in town on a weekend," he says. "Here, you can really get to know someone."

A conversation with Smith, 54, is like his dancing, constantly changing directions and movements. He diverts between discussing the woman he learned to dance for 25 years ago, and when he lived in Mexico City, France and Italy and studied with various dance instructors. Growing up in Los Angeles, he says he'd never heard of Spokane until his parents moved here later in life. When his dad fell ill, he moved from Portland about 12 years ago to be closer. Since then, he's been teaching at various locations until he opened his own studio two years ago.

In this partner form of dancing, the men take the lead and women follow while wearing heels. It's the leader's job to assess how the female wants to dance in that moment, gentle or fierce, Smith says. Often couples don't look at one another at all, adding another layer of difficulty.

"I love being led around," says Davidson, a surgeon at Lincoln County Hospital. "I'm in charge at work all day, and through dance, I don't have to think, just feel. I would be here every night if I could."

Getting the men in the door is sometimes a challenge.

"Men often think I'm going to try and make them look dumb in class," Smith says. "But I only want them to build confidence. Ladies want to dance with their partners; they don't care how amazing they are. Of course, I can help them improve if they want, too." ♦

The journey of Vytal Movement Dance is illustrated in its upcoming performance, "Sanctuary"