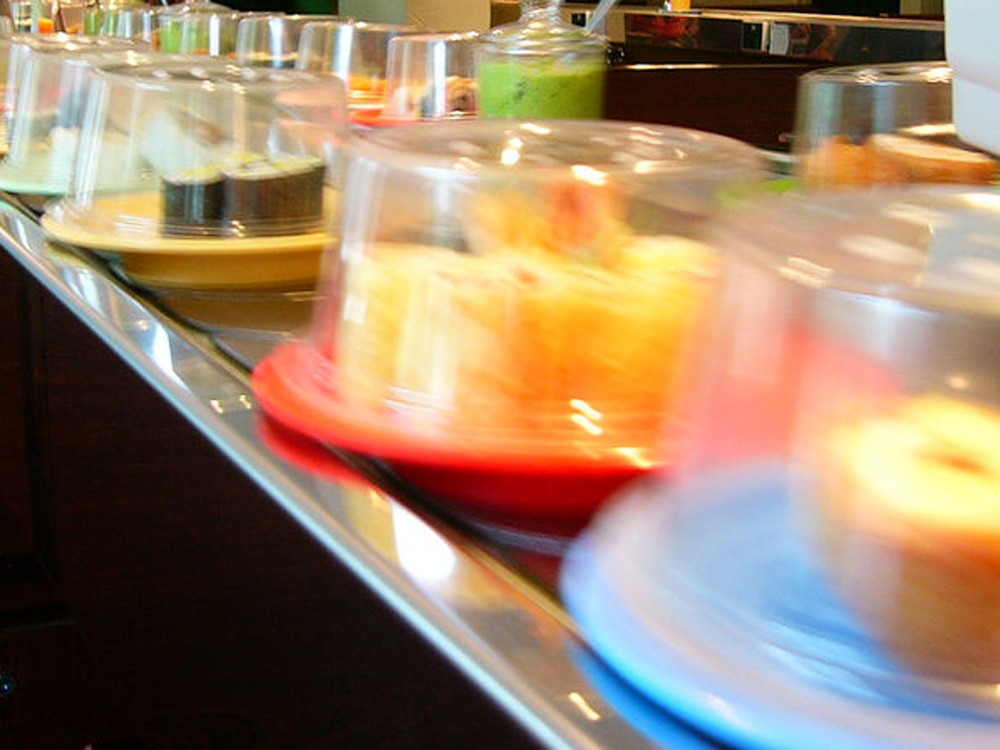 Picking up a saucer-sized plate with three pieces of kani su ($1.50; crab rolled in cucumber peel with masago and avocado), my friend — who also works in a sushi restaurant — mentions that her customers sometimes ask if rolls come in half-sizes.

“Those kind of people would like this,” she says, eyeballing the Crazy Chicken as it passes by ($3.25; teriyaki chicken, scallions, cucumber, romaine lettuce and masago).

For logistical reasons, most sushi joints aren’t chipper about chopping a caterpillar roll in half — just so a customer can sample a bite — then setting the rest aside, hoping it will sell in four minutes.

Sushi Track, however, is designed for this.

In the fashion of grabbing suitcases from a luggage carousel, diners — who can opt for bar seating on one side of the track or table seating on the other — nab selections at will, which range from $1.50 to $4.50 (visible legends indicate which colored plates cost what).

The Volcano Roll ($3.50) — a rich combination of cream cheese, cucumber and crab topped with “Volcano Dynamite” (a melt-in-your-mouth blend of broiled crab and cheese) — kept us peering down the belt looking for more. The Dragon Roll ($3.50), whose fresh romaine lettuce added pleasant crunch to the shrimp tempura/avocado/mayo/masago combination, did the same.

We also liked pan-fried Gyoza ($4.50; not steamed and doughy, or deep-fried and overly greasy) and the Hawaiian Poke ($10.95), which was cubed ahi mixed with green and purple seaweed. (Note: The wooden sticks in the poke are garnishes. Not fancy pretzels, as one of us felt the need to verify.)

The rice on one of my spicy tuna rolls had a trace of staleness, which presented the question: How many times does this stuff circulate until it’s canned?

Keep in mind, a number of the house specialties like the Four Season ($10) Sexy Tuna ($10.95) and Happiness ($13) — three creations enthusiastically recommended by the staff — have to be ordered whole.

And save room for dessert. You’ll thank me later.

“This, this very Asian. It’s covered in a sweet, doughy rice,” says our charismatic waitress, Chae Suk Shaw, pointing to the Mochi ($4.90).

She shifted her gaze to the Tempura Ice Cream ($3.90). “This, this is very American. Americans like everything fried.” (Blair Tellers)

Pulling up to Baby Bar on my bike at 7 am on a Wednesday morning felt more like a walk of shame than a breakfast run. I’m not used to getting espresso and pastries from a place I’ve stumbled away from the night before.

Mika Maloney, sole baker and barista for Neato Burrito/Baby Bar’s newest extension — the Morning After Bakery — says being there at sunrise trips her out, too.

“Sometimes I get here and it’s four in the morning, and they’re still cleaning up in the bar,” she laughs, carefully extracting mini-muffins from a pan.

With early gray light filtering in the windows and Gillian Welch crooning softly from the speakers, the usually buzzing burrito joint and micro-bar has a rarely seen docility.

In addition to comfy booths and free Internet, there’s solace here from commuter crowds, long coffee lines and shitty hangovers — even more so in a little while, after owner Tim Lannigan has a chance to start serving breakfast burritos.

“They’re on the horizon,” he assures. They’ll cost around $6 and contain ingredients like tofu, eggs, chorizo, bacon, beans, cheese, veggies and sour cream.

“It could be a couple weeks or months, but by next year we will have them,” he says.

Until then, sample one of Maloney’s treats, paired with a shot of locally roasted Anvil espresso or a latte — flavored with one of three scratch-made syrups: vanilla bean, salted caramel or cocoa.

Maloney keeps the vegans in mind with goodies like coconut cupcakes ($2), peach bran or apple apricot muffins ($2), and gluten-free stuff is in the works.

She was fresh out of savory tarts ($3.50), which come in varieties like cheese and olive, or onion and tomato, but they sound tantalizing.

“I think they’re going to get an espresso sign to lure people over from the Davenport,” says Maloney, gazing towards Sprague and smiling. “Because otherwise, people are just gonna see ‘Neato.’”

Memo to guests at the Davenport (and everyone else): Morning After Bakery is open for business. (Blair Tellers)

Burritos & poetry, art videos, and a speech on justice

By Leah Robin and Tiffany Harms