The subsidiary of Privateer Holdings is met with few tough questions, showing what a difference a year makes 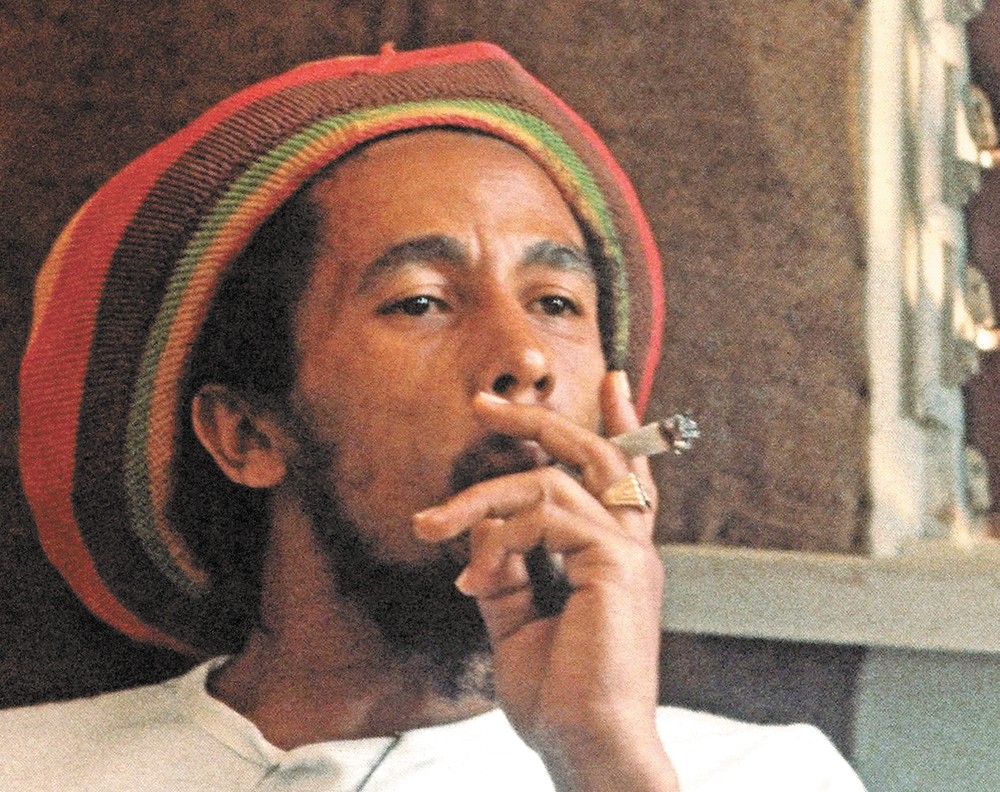 Privateer Holdings, the Seattle marijuana company long acclaimed locally for its straight, corporate image and Ivy League-educated bosses, was launching "the first global pot brand" based on the legacy of Bob Marley.

"If you believe the hype, we're going to look back and say this is where it all started — where pot got an image makeover," NBC correspondent Kate Snow enthused. She went on to pay the accustomed tribute to "the suits behind the deal" — in particular Privateer CEO Brendan Kennedy, who holds an MBA from Yale. Dressed in a suit and tie for the camera, the clean-cut Kennedy described his journey from a venture-capital bank to what he called "the biggest opportunity in my life." According to Privateer's figures, quoted at the end of the segment by Snow, the worldwide marijuana market is worth as much as $150 billion. Her fellow correspondents giggled. "Crazy!" one marveled.

An onslaught of national press coverage followed — all of it taking a respectful and somewhat awed tone. In one way, that's not a surprise. "Marley Natural," as the brand is called, rolled out with the family of Bob Marley fully on board and granting interviews. The announcement arrived with a slick promotional video, featuring misty mountains and the late reggae singer's classic "Could You Be Loved," as well as a lion-centered logo designed by upmarket Seattle branding company Heckler Associates, also responsible for the Starbucks mermaid. Oh, and Privateer has raised $50 million through equity offerings. It hopes, according to a filing with the U.S. Securities and Exchange Commission, to raise a total of $75 million.

Yet those who remember a certain infamous press conference held last year at Seattle's Columbia Tower — led by another ambitious potrepreneur by the name of Jamen Shively — might have a moment's pause. Shively also was touting a would-be international pot brand that he said was the first to take advantage of a "hundred-billion-dollar" market. As a former Microsoft manager, he had business bona fides. And he also had a star on hand, former Mexican president Vicente Fox, who flew in for the occasion.

In crucial respects, the Shively and Privateer announcements were "the exact same," observes Alison Holcomb, the ACLU attorney who led the campaign for marijuana legalization Initiative 502.

Shively, however, faced tough questions from the journalists present and downright mockery from veteran pot activists. Was he really openly announcing an interstate conspiracy in violation of federal law? Wasn't he baiting the feds and risking a backlash that would hurt the industry? If not, how was his brand going to work? And what did he know about pot anyway? Shively had only discovered the stuff a year or two prior, in his early 40s.

A few reasons might account for the enormous change in tone that now greets Privateer. "Classist isn't the exact right term," muses Holcomb, but she notes that Privateer's Ivy League pedigree probably earns it a benefit of the doubt that Shively didn't get, even with his Microsoft background. Or maybe because of his Microsoft background, combined with something a little goofy about his persona. "He looked like somebody who in his dreams was Bill Gates," reflects Mark Kleiman, the UCLA public-policy professor who served for a time as the state's top consultant on I-502 implementation.

"If you look at our track record, you can see we're serious," says Privateer public-relations director Zack Hutson, scoffing at the comparison with Shively. Indeed, Privateer hasn't just jumped into the pot business. Over the past two years, it has built a portfolio of subsidiaries, including the Yelp of marijuana dispensaries, the website Leafly, and a 60,000-square-foot, federally licensed grow operation in Canada.

But there's likely a bigger reason for the different reception given this hoped-for "global brand": Marijuana legalization has made dramatic strides just in the past year. The Marley Natural announcement came just weeks after Oregon, Alaska, and Washington, D.C. voted to legalize recreational marijuana. And this was a midterm election that generally trended conservative, Holcomb observes. More legalization initiatives and legislative bills are on the way. A national, maybe even international, pot brand no longer seems so crazy.

"Timing is everything," says Hilary Bricken, one of the state's go-to lawyers representing marijuana entrepreneurs. Shively once said that brand domination came from getting in early and being "first to mind." Ironically, as Bricken observes, "he may have just been, frankly, too early."

If legalization laws are one way of marking the changing climate

, another is the evolution of Privateer itself. When the company burst onto the scene in 2011, it kept telling reporters that it would be involved only in "ancillary" marijuana products. Its MBA founders, also including CFO Michael Blue and COO Christian Groh, made clear they were not interested in legal risk. The company's first acquisition, in 2012, was Leafly — easily defendable as a First Amendment operation.

Last year, however, Privateer went in a dramatically different direction and started planning a full-on medical-marijuana grow operation in British Columbia, to be run by another subsidiary called Tilray. Canada's federal government, unlike ours, has legalized medical marijuana, and just switched from a system that relied on home grows to one based on licensed facilities. Privateer poured $20 million into Tilray, hired 110 employees, and opened in April as the biggest such operation in Canada, according to company vice-president Philippe Lucas. He says the company will now mail a selection of the 40 strains of marijuana it grows to anywhere in Canada for a mere $5 shipping fee.

Growing marijuana "wasn't even on the radar for us last year," Hutson says, reiterating how quickly things are changing.

Meanwhile, in the U.S., Privateer took another step closer to the core business of growing and selling marijuana by establishing Arbormain, which will rent space to I-502 license holders. Hutson says the company is building a facility in the Olympia area.

And now there's Marley Natural. In its announcement, Privateer did not get into the nitty-gritty of how its international operation will work in the face of pot prohibitions in most countries around the world. In an interview, however, Hutson, previously a spokesperson for Starbucks, offers a few details. He talks by phone from Marley Natural's new 4,000-square-foot office space in the Bowery section of Manhattan, where he says Privateer has chosen to locate this subsidiary because of the talent pool in such areas as lifestyle branding.

The company, he says, is likely to start selling pot overseas: "We're in discussions with a distributor in Israel" — a country with a federally legal medical-marijuana system. Hutson also cites Uruguay and the Netherlands as potential early markets. The Netherlands famously has a gray pot market, Hutson notes. And Uruguay recently legalized marijuana, which makes it possible that Marley Natural might grow its pot there and export to other countries, he says. (Tilray might also start growing marijuana in Uruguay, according to Lucas.) Alternatively, Marley Natural might not grow pot itself but license its brand to local growers, according to Hutson.

It could possibly do the same in states where legalization laws have passed in the U.S., Hutson says, although it might initially limit itself to selling pot-infused products, like lotions and creams, and accessories such as vaporizers in the those states.

That strategy is not exactly risk-free, though. Israel has a very limited medical-marijuana system that, as of early this year, allowed only nine doctors in the entire country to write prescriptions, according to news reports. And while the Netherlands may have a gray market, "the coffee shops that sell dope are breaking the law and people do get arrested," Kleiman says.

What's more, Kleiman adds, the American government could surely — if it chose to — take an interest in what Privateer is doing here and around the world. Even if the company is adhering to local laws, it is still "conspiring to commit a federal crime," he says.

And, Bricken wants to know

, how does it get the profits back from its overseas operations "without raising red flags?"

"What does the IRS think of that? The DOJ? ... That to me is where things get extremely complicated." She adds that she'd love to know "what nods," if any, Privateer has gotten from the feds on these questions.

Hutson isn't saying. Nor will he discuss any legal questions, beyond insisting that whatever Privateer does will be consistent with local and federal laws. He also won't supply the prospectus given to investors or share what they've been told about their legal risk. "It's a private offering," he says by way of explanation.

His vagueness extends to the brand itself. If Marley Natural will be, in many places, merely licensing the brand to growers, what exactly will buyers be getting? Kleiman asks. Echoes Henry Wykowski, a veteran San Francisco attorney representing pot activists and businesses: "I don't know anyone who would pay a premium to buy cannabis just because it had Bob Marley's name on it."

"They will be getting a quality product that meets our quality and safety standards," Hutson says, but without elaborating upon how Marley Natural's standards would be different from any others'. He does specify that the company hopes to offer "heirloom Jamaican strains" of pot, although how it will transport the seeds around the world legally is another unanswered question.

What's not vague about Marley Natural and its parent company is the vast sums of money behind them. Shively was derided last year for gleefully conceding that his outfit was "Big Marijuana." He has since dropped out of view. Privateer, for better or worse, has taken that mantle. Says Bricken: "They're closer to Big Marijuana than any institution or entity I have seen this far." ♦

A version of this story first appeared in Seattle Weekly.