The Spokane City Council voted unanimously Monday against a settlement for a cop who drove drunk while off duty, hit another car and left the scene of the accident. By doing so, the council opted against pissing off just about every Spokane voter.

Councilman Mike Fagan summed up the sentiments of angry Spokanites, who flooded the council’s office with phone calls and angrily protested any settlement for former Officer Brad Thoma.

“I not only say no,” Fagan said, announcing his vote against the settlement, “I say hell no.”

Councilwoman Nancy McLaughlin was not present for the vote. Council President Ben Stuckart says council offices received more than 100 calls and 100 emails, all of them opposing the settlement.

Last week, Mayor David Condon supported the settlement as “a legal solution to a problem of financial risk to the city.” But when the state Human Rights Com mission quickly announced it had decided to reevaluate its recommendation that the city rehire Thoma, Condon asked the council to shelve the vote while the administration considered its options.

“He was fine that the council decided to take it up and [vote it down],” city spokeswoman Marlene Feist says.

If the council had approved the settlement, Thoma would have been reinstated in the Spokane Police Department. He also would have received over $275,000 in back pay and benefits.

Council members acknowledged that by voting down the settlement they were exposing the city to a larger financial risk.

Thoma’s attorney, Bob Dunn, announced his intention to file a $4 million civil suit against the city. That sum represents what Thoma could have expected to receive through pay and benefits through retirement, Dunn says. (Joe O'Sullivan)

Race For the Ridpath

Stephen Antonietti, the guy corralling investors for his ambitious vision to remake Spokane’s Ridpath hotel, now has a little bit of competition for the Halliday Building that borders the hotel’s iconic tower. The building is key to his plans: Antonietti says he’ll transform the hotel into a massive entertainment complex.

But Michael Maddy, the Montana-based developer that owns the Halliday, now says more parties than Antonietti are interested in that building.

“Recently, we’ve had some other inquirers, so I called Steve up and said, ‘Soon you have to go forward or we have to look at other options,’” Maddy says.

If anyone makes an offer, Maddy says Antonietti will be the first to know. Antonetti says he’s been waiting for his paperwork to go through. But meanwhile, there’s still been trouble. The alarm in the Ridpath went off twice last week and not because of intruders. These alarms were set off because of water from leaks in the roof. (Daniel Walters)

The good news for state Sen. Michael Baumgartner, R-Spokane, and his challenge to Democrat Maria Cantwell in the U.S. Senate race is that he has a fundraising advantage over the other candidates vying to take on the two-term incumbent.

The bad news is that he has a long way to go to match Cantwell.

According to the Federal Elections Commission, Cantwell has about $4 million cash on-hand. Baumgartner, meanwhile, has just over $99,000. Arthur Coday, the other Republican, has raised more than $16,000. Max Englerius, who is running in the American Tradition party, has not reported any fundraising totals to the FEC. 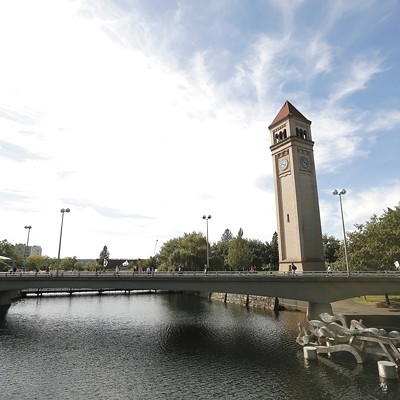