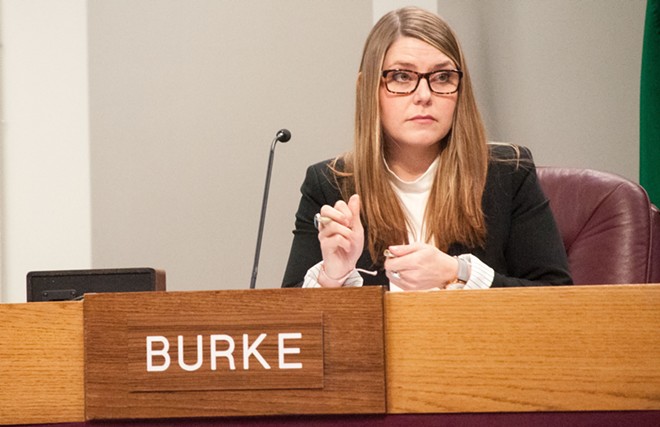 Daniel Walters photo
Councilwoman Kate Burke
Even when the specter of a pandemic isn't bearing down upon Spokane, Kate Burke has been the Spokane City Council member who's been the most vocally ardent — even angry, at times — about the plight of homeless and impoverished people in Spokane. She's the one council member chained herself outside City Hall in protest of the city's removal of a homeless camp.

Yesterday, the City Council met in a study session to discuss the impacts of the coronavirus.

Yesterday, Burke sent out a press release anyway, calling for a slate of reforms the city could enact:


"Councilwoman Burke is calling for City Hall to protect the health of renters by placing a temporary moratorium on all evictions and utility shutoffs," the press release reads. "Basic resources like electricity, internet, heat, and water are critical to maintain good health and stay in contact with medical professionals. Second, City Council and the mayor must expand universal paid sick leave laws to ensure employees are able to pay for basic necessities if they are unable to work."

Burke's letter also stressed that the city should be cautious when it comes to limiting access to important services, like homeless shelters, warming centers and public transit.

"You just saw, the libraries are shutting down," Burke says. "We really have to focus on that. Where are people going to go?"

So far, Spokane still doesn't have any confirmed cases of the coronavirus, but Burke argues that that's all the more opportunity to act now.

"If we can get ahead of the curve, we're going to beat this."

"If we can get ahead of the curve, we're going to beat this," Burke says. "If we can continue to tell people to stay home and to not go to work, that you're safe, you won't be evicted, your utilities won't be shut off."

In other words, the more we can assure vulnerable people that their livelihood doesn't depend on them going to work or hanging out in public when they're sick, the easier it will be to suppress the spread of the illness.

In a way, it's an echo of the arguments that City Council members made four years ago, when they passed an ordinance mandating most local businesses offer sick leave, with some exceptions, like those for small businesses. Initiative 1433, however, further strengthened Washington state's sick leave provisions as advocates argued that it was crucial to suppress disease outbreaks.


"Let’s say I am a restaurant owner and I have eight employees. It is still vitally important to the workers and the community to [provide enough paid sick leave]," the initiative's communications director, Jack Sorensen, told the Inlander in 2016. "Seventy percent of all norovirus outbreaks start with food handlers."

In the case of Spokane, Burke wants to expand the amount of sick leave days businesses are mandated to offer, anticipating that the coronavirus will hang around longer than your average illness.

City Council President Breean Beggs says he's looked through Burke's proposed reforms but hasn't spoken with her and other council members about it.

IN CASE OF EMERGENCY


According to the city charter, if Woodward were to call a state of emergency, the declaration would give her control over "shutting off, restoration, and operation of utility services in accordance with priorities established for combating such civil emergency."


Her emergency powers could also theoretically include: closing businesses or other locations, ordering medical facilities to provide medical care, banning the sale of liquor or gasoline, establishing a curfew, and imposing price controls.

So far, however, Woodward has declined to issue an emergency proclamation.

On Thursday, Beggs says, the council believed the mayor was likely to start the paperwork necessary to move the city to a state of emergency. He says the council planned to hold a 4:30 pm session on Friday to ratify those orders. But that decision was put on hold, Beggs says, as the mayor has been talking to other leaders in the community.


"The mayor convened a meeting this morning of lots of other mayors in the county and the county commissioners to work on everyone getting on the same page together," Beggs says. So far, he hasn't heard about any detailed discussions about how the mayor would use those emergency powers.

Seattle, the region in the United States that has been hit hardest by the virus, foreshadows the possibilities. Seattle Mayor Jenny Durkan issued an emergency declaration on Tuesday of last week.

"Social distancing is one of the most important public health recommendations," Mosqueda says. "You cannot do that if you will be huddling under a bridge to be warm."

"We need hand washing stations to be deployed across the city," Mosqueda says. "Those purchases can be made relatively quickly."

Burke believes Spokane should do the same.

"Hand-washing stations at both the plaza and high traffic bus stops is really something we need to do as well," Burke says.

The city and local social services agencies have already been developing plans to deal with an outbreak at a homeless shelter, and have been searching for space to isolate infected homeless men or women if necessary.

But as Seattle, New York, China, Italy, and South Korea can all attest: Things can change very fast.