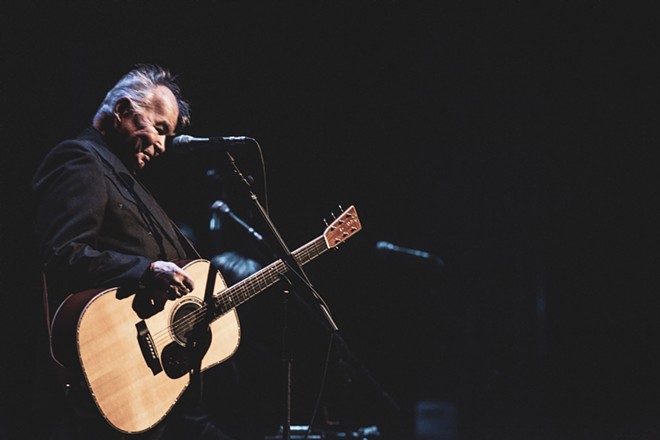 Rett Rogers
John Prine is set to perform at the First Interstate Center for the Arts on Aug. 7.

Spokane tends to attract the biggest names in country music, and 2020 has some genuine legends of the form stopping through. Here's what we're excited about.

May 3
Charley Pride
One of the biggest hitmakers in the '70s, country star Charley Pride racked up more than 25 No. 1 singles, including "It's Gonna Take a Little Bit Longer," "Kiss an Angel Good Mornin'" and "I'm Just Me." Northern Quest Resort & Casino, $69-$89

June 13
Tanya Tucker
A consistent presence on the country charts since breaking out with 1972's "Delta Dawn" as a teenager, Tucker's had something of a resurgence with her recent solo album While I'm Livin'. It's earned her some of the best reviews of her career, and her first Grammy nominations since the '90s. Bing Crosby Theater, $37.50-$67.50

Aug. 7
John Prine
You can't have a conversation about the greatest country songwriters without mentioning John Prine. The outlaw legend is on the road celebrating the 20th anniversary of his album In Spite of Ourselves, and the release a new EP Sittin' on a Rainbow. First Interstate Center for the Arts, $59.50-$99.50

In other concert news:

Feb. 18
Atmosphere
Good timing: The rapper/producer duo of Slug and Ant dropped their new album Whenever earlier today. They hit the Inland Northwest on just about every tour and usually sell out, so get your tickets now. Knitting Factory, $27.50

Feb. 23
Sara Evans
Speaking of country, Sara Evans is destined to be a legend if her career continues its ascent. Her blend of countrypolitan and singer-songwriter influences has spawned hits like No. 1 hits like "A Little Bit Stronger" and "A Real Fine Place to Start." Northern Quest, $49-$69

March 7
Too Short, E-40 & Mack 10
For lovers of classic hip-hop, West Coast legends and longtime collaborators Too Short and E-40 are hitting the Knit stage, alongside former Westside Connection member Mack 10. Meet and greet tickets are available for $100. Knitting Factory, $50

April 22
Milky Chance
Their song "Stolen Dance" has become a go-to for every coffee shop performer, and now the German duo are back with a brand new LP called Mind the Moon. You know what their encore will be. Knitting Factory, $32.50