How should journalists report on mass murderers? 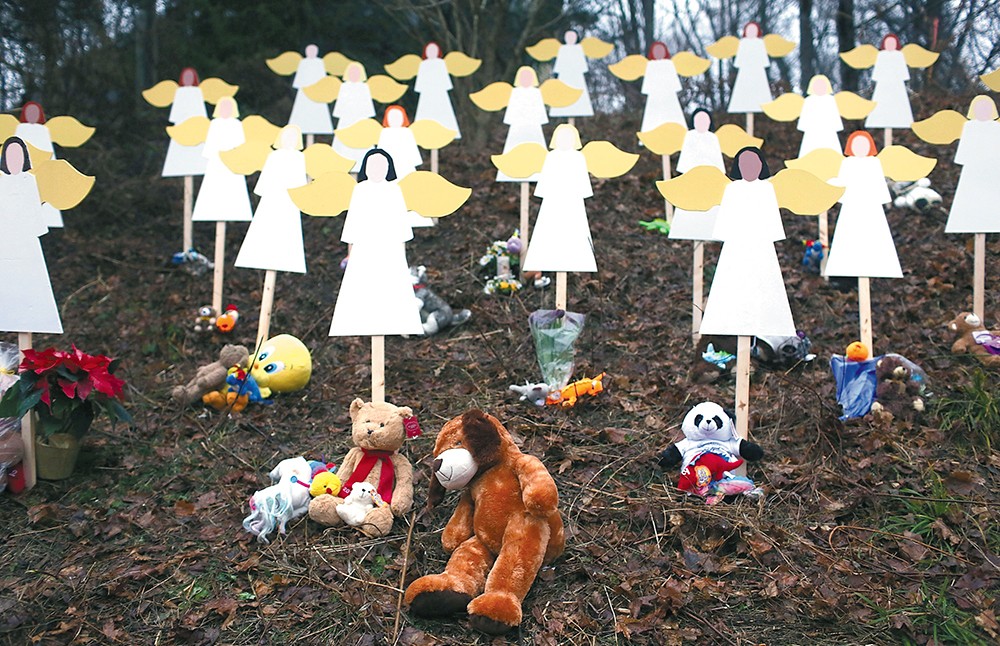 Spencer Platt/Getty Images Photo
A memorial for the Newtown shooting.

On Feb. 2, 1996, a 14-year-old student walked into Frontier Middle School in Moses Lake, Wash. He left in handcuffs, but not before killing two fellow students and a teacher.

With so many other high-profile mass shootings since, Barry Loukaitis' name may have largely fallen out of the public consciousness. For me, his name has stuck. It's the first school shooting I remember hearing about on the news (myself a middle school student at the time, 60 miles away).

Closer to home, this week marks 20 years since Dean Mellberg killed four people and wounded 22 at Fairchild Air Force Base, reminding people in the Inland Northwest that such events can happen anywhere. (See story on p. 24.) The anniversary comes on the heels of shootings at Seattle Pacific University and Reynolds High School in Troutdale, Oregon.

Journalists, it seems, sadly have numerous opportunities to report on such events.

To Name or Not to Name?

After every high-profile shooting or act of violence, a debate ensues about whether news outlets should refrain from naming the perpetrators, lest they encourage other people who are seeking perverse infamy.

After Sandy Hook, sociologist Zeynep Tufekci, writing in The Atlantic, implored the news media to stop "inspiring copycat killers" by reporting so quickly and heavily on details of the perpetrator. The reasoning, she argued, is that such coverage should be treated like suicide and reported with extreme caution. Many news outlets in the past 30 years have restricted or rarely reported on suicide, out of fear of inspiring others.

"I am increasingly concerned that the tornado of media coverage that swirls around each such mass killing, and the acute interest in the identity and characteristics of the shooter — as well as the detailed and sensationalist reporting of the killer's steps just before and during the shootings — may be creating a vicious cycle of copycat effects similar to those found in teen and other suicides," Tufekci wrote.

That debate doesn't happen in a vacuum, nor does it fall on deaf ears. This question of whether or how much of a killer's details to report rages on in journalistic circles. Sun News Network in Canada recently refused to report the name of a suspect accused of killing three police officers.

Writing about Sun News' justification for the Poynter Institute, a school for journalists, Al Tompkins said he understood the desire not to inspire copycat killers, but explained the obligation journalists have to reporting truth and explain motives, however twisted they are.

"Sun News correctly points out that sometimes news events inspire copycats," Tompkins wrote. "But who among us would suggest journalists should not have identified and investigated everything there was to know about the 9/11 hijackers? The wall-to-wall coverage of the Boston Marathon bombing has not lead to copycat bombings; the coverage of the horrific Oklahoma City federal courthouse bombing didn't lead to similar terrorism."

The important thing, Tompkins notes, is not the simple fact of reporting a killer's name or his motives, but rather its treatment or prominence, and how that's balanced with reporting on and memorializing victims.

Journalistic Ethics: Not an Oxymoron

It's no secret that journalists have a tough time currying public favor. Surveys such as a 2013 inquiry from polling firm Gallup rate reporters ("TV" and "newspaper") with lawyers in their level of honesty and ethics. Only advertisers, politicians, car salesmen and lobbyists ranked lower.

Believe it or not, ethics are a very serious and integral part of journalism. Though based on how journalists are often perceived in public opinion polls, it's not surprising if people think "journalistic ethics" is an oxymoron.

When shooting (or any other "news") events occur, outlets everywhere (from the local TV station to CNN to the Huffington Post) decide what to report and how to do it ethically — or at least that's the hope. Industry organizations such as the Society of Professional Journalists (for which I work) try to educate journalists and the public about the importance of ethical reporting. The SPJ Code of Ethics is one of the go-to resources in journalism regarding ethical standards.

But the SPJ Code, and any number of similar ethical guides, comes with two inherent conflicts.

First, journalism ethics aren't legally enforceable because of the broad protections afforded the press by the Constitution. Nor is SPJ (or other journalism trade groups in the U.S.) a policing or enforcement body. When journalists act in an unethical manner, there is no license to revoke or governing organization to prevent the transgressor from further work, as is the case with doctors and lawyers. Public scrutiny is sometimes the only (and best) response.

Second, journalism ethics codes are not a rulebook of what you can and cannot do, but rather a resource for making ethical and defensible decisions. And those guidelines can seemingly contradict each other.

Take, for example, the first pillar of SPJ's Code of Ethics, which implores journalists to "seek truth and report it." Contrast that with the second section, which admonishes journalists to "minimize harm." Those two concepts, "seek truth and report it" and "minimize harm," result in this balancing act in reporting on news events as complicated as shootings and other tragedies.

How can journalists minimize harm done to victims and communities affected by mass shootings if, at the same time, they are seeking and reporting the truth — which includes difficult details about the perpetrator?

Journalists covering the aftermath of recent killings at the University of California-Santa Barbara in Isla Vista saw that tension up close. While covering the story, photographers and TV reporters encountered residents, many of them college students, holding signs such as "News Crews Go Home" and "Stop Filming Our Tears."

The response of journalists is sometimes to circle the wagons, to say that we're just doing our jobs, which includes reporting on tragedy — and on who perpetrated the crimes. But even when reporting on tragic events in a breaking and developing situation, journalists should keep another point in mind from the SPJ Code of Ethics:

Is it "pandering to lurid curiosity" to stay in a community and show so vividly the tears of grief-stricken students while they ask you not to? Is it insensitive?

Another sign directed at journalists in Isla Vista put it more bluntly: "Our Tragedy is Not Your Commodity."

It's easy to respond that we're just reporting the news and nothing else, not making a quick buck off of your tears. However, those pictures can be seen on numerous news websites. For example, the Los Angeles Times has a photo slide show of many images from memorial services. To scroll through the slide show, users must click past dedicated advertisements to continue.

Long after the TV crews leave town, the memory of how those events were covered by the news media will persist. It's important for the public to remind the news media how reporting in the face of tragedy can affect them.

After all, the final point of the SPJ Code of Ethics is for journalists to "be accountable." In that vein, journalists are told they should:

"Encourage the public to voice grievances against the news media" and "Abide by the same high standards to which they hold others."

That's a lesson worth remembering long after the name of any notorious killer fades from the headlines. ♦