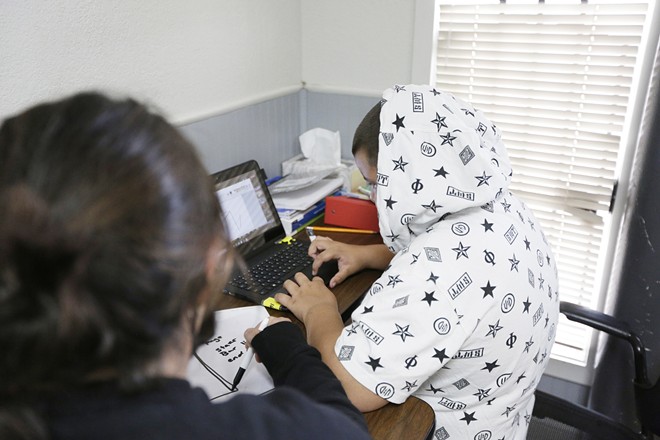 Seventeen people at the Family Promise Open Doors shelter, including 15 guests and two staff members, have tested positive for COVID-19 since last week, according to Joe Ader, Family Promise of Spokane executive director.

The youngest person to test positive is a 1-year-old, and the oldest is an adult in their 30s, Ader says.

"Family Promise tries to be up front and transparent and truthful about everything we're dealing with, so that's why we wanted to get this information out to the public as soon as possible," Ader tells the Inlander.

In a press release, Family Promise says "other local congregate shelters have also experienced positive COVID cases at their respective sites." Ader would not disclose which other shelters may have had positive cases.

Spokane Regional Health District epidemiologist Mark Springer confirmed the outbreak at the Open Doors shelter but would not identify others, saying the health district is leaving it to shelter operators to disclose that information. But he did say the health district is seeing "a pretty significant number of outbreaks in different congregate settings."

"Some are shelters, some long-term care facilities, some are adult family homes and group homes," Springer says. "So anything congregate at this point is seeing a lot of COVID activity."

Family Promise learned of the first positive COVID-19 case on Thursday, Nov. 5, when a guest called the shelter to notify staff that they tested positive for COVID-19. That person was immediately put in an isolation facility, the shelter says.

But that person and their family had already been in contact with at least two other families and three staff members. CHAS Health tested everyone who'd been at the shelter since Monday, Nov. 2, and identified the 17 positive cases. Ader says there will be another round of testing later this week. The health district immediately sent a team to help with testing and contact tracing as well, Springer says.


The Open Doors shelter has become a "quarantine site," Ader says. Families who tested negative have been put into a motel by the health department.

Many local shelters for people experiencing homelessness have been full recently. Family Promise says it has turned away 68 people just in the last week, including 32 people the night of Nov. 4. The Open Doors shelter has space for 60 individuals.


Open Doors has had a mask mandate, and followed health district and CDC guidelines in order to prevent an outbreak, the shelter says, including implementing social-distancing measures. Part of that included adding another family shelter site on Hartson Avenue in Spokane in order to reduce the number of families congregating in Open Doors.

Family Promise has made requests for government assistance funding of $3.25 million, Ader says. That includes a request for Spokane County Commissioners to give Family Promise $3 million in CARES (Coronavirus Aid, Relief, and Economic Security) Act money to expand facilities, which was denied because, as it was explained to Ader, CARES funding can't be used for capital requests. Ader says in recent weeks Family Promise requested $250,000 from the county that would cover the costs of opening the second family shelter and provide a boost to help with safety planning. Ader says he has not heard back on that request.

Family Promise says it has been isolating guests showing potential COVID-19 symptoms since March, but has not had a positive test result since the pandemic began.


Family Promise says it has been preparing for this scenario since December of 2019. On Dec. 20, Ader sent former Spokane Regional Health Officer Bob Lutz an email asking for a "preapproved agreement for a mass shelter outbreak response plan that would include quarantine and immunization procedures for mass shelters, including some type of pool of funds for facility sanitation and cleanup," according to a screenshot Ader shared with the Inlander. "That way when something does happen, we are not all trying to figure out what to do, but instead we enact a plan," Ader says.

The Inlander will update this story as more information becomes available.