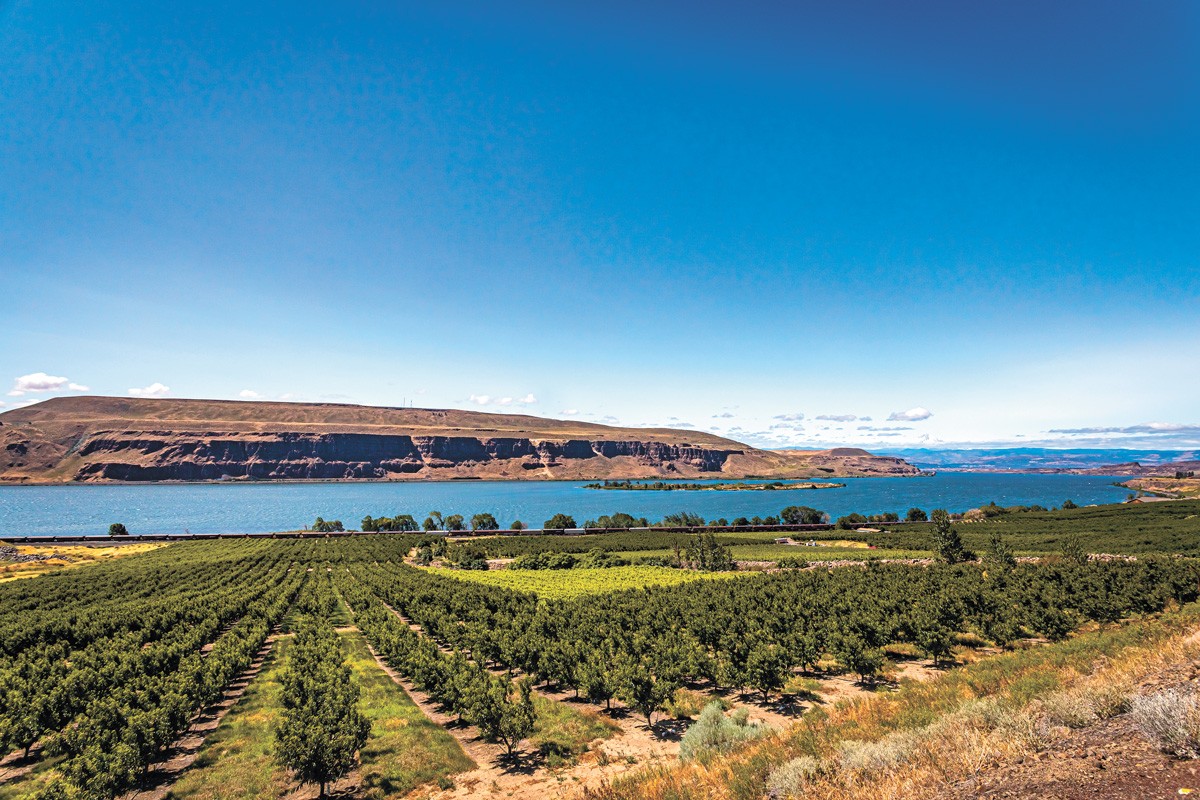 One of many apple orchards along the Columbia River in Washington.

When Laura Sandoval said goodbye to her husband, Eduardo, in August, she thought he'd return home to Mexico in three months. She trusted that the fruit farm that hired him — Washington Fruit and Produce — would protect Eduardo from COVID-19.

Instead, he got a case of COVID that will cripple him for life.

And when Laura flew to Spokane to care for her husband, she thought the company would — at the very least — provide the workers compensation that Eduardo legally was entitled to for catching COVID-19 on the job.

But to this day, she hasn't seen a penny.

"I don't know how they can sleep at night, knowing the situation we're in," Laura tells the Inlander, through a translator.

Eduardo, 38, worked for Washington Fruit under the federal H-2A program, which allows foreign agricultural workers to obtain a temporary visa and live in employer-provided housing. On Oct. 11, days after he told Laura that one of his housemates had COVID-19 symptoms, Eduardo had a stroke that paralyzed the right side of his body, leaving him unable to talk or walk.

Eduardo's case is just another example illustrating the inhumane way farmworkers are treated, says Jennyfer Mesa, founder of Latinos en Spokane, an advocacy group that connected Laura to resources as she cared for her husband in Spokane. Two other farmworkers — a 37-year-old from Mexico and a 63-year-old — died from COVID-19 in July while working for a different company, Gebbers Farm, in Washington. That farm was fined $2 million by Labor & Industries for COVID-19 rule violations.

"I see it as modern-day slavery," Mesa says of companies that refuse to honor commitments to foreigners legally working in the United States. 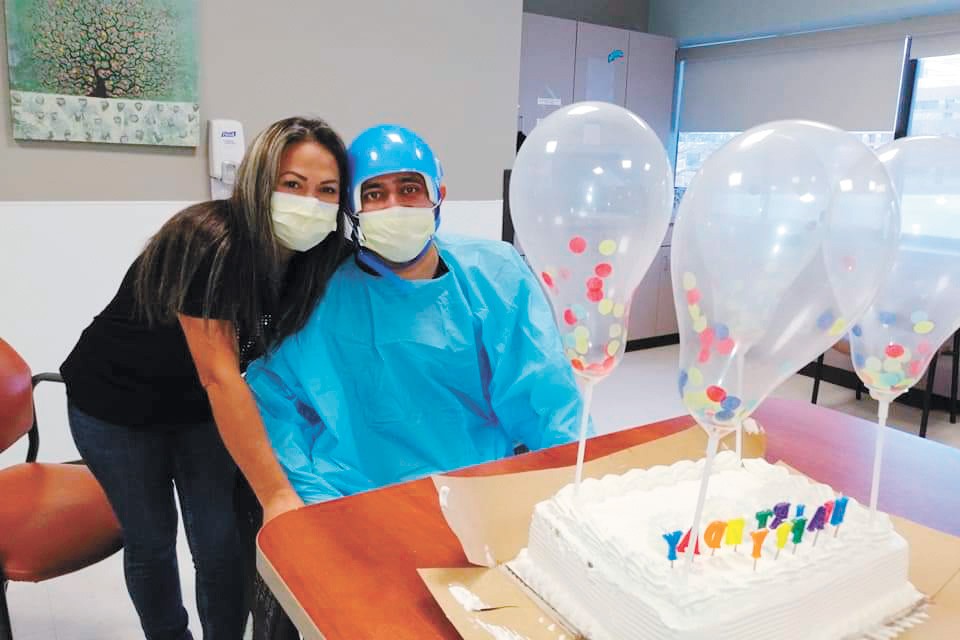 Courtesy of Jennyfer Mesa
Laura Sandoval (left) flew to Washington to help care for her husband, Eduardo, who suffered a stroke paralyzing half his body.

Labor & Industries conducted hundreds of agriculture inspections on companies last year, finding violations at 130 of them as of November. Washington Fruit says it passed all its inspections with no COVID-19 violations, but Labor & Industries says that's not exactly true: A Washington Fruit worksite in Plymouth, across the Columbia River from Umatilla, Oregon, was fined $1,500 on Oct. 29 for not implementing a distancing plan at housing sites, and a site in Yakima was cited a week later for not providing masks at no cost to employees.

And Eduardo's situation suggests that — even if all the rules were followed — a number of cases may have been missed simply for a lack of testing.

In an email to the Inlander, Katherine Ryf, Washington Fruit's human resources director, notes that at no time did Eduardo test positive while on the farm. She says Eduardo and two other Washington Fruit employees were told to self-quarantine by Anovaworks Clinic due to COVID-like symptoms in September, then cleared to work by Sept. 29. On the day of his stroke, Oct. 11, none of Eduardo's housemates had symptoms of COVID-19 — though she didn't specify if they did at any other time shortly before or after.

She writes that while it's possible Eduardo became infected in employer-provided housing, it is "irresponsible to say so until a credible contact tracing process is completed."

But it's not just that Eduardo didn't test positive on the farm. In fact, he wasn't tested there at all. This is despite the company acknowledging that he was told to self-quarantine because of COVID concerns. And the two other employees told to self-quarantine at the same time? They weren't tested either, Ryf says. This lack of testing might complicate Washington Fruit's desire for a "credible" contact tracing process, but Ryf says the company is continuing to this day to do contact tracing in Eduardo's case.

She also says the reason Eduardo and others weren't tested is because they simply refused.

Eduardo is unable to speak, due to his stroke. But Laura, who spoke regularly with Eduardo over video chat during that time, disputes the company's timeline and the reason Eduardo was not tested.

And Eduardo's situation suggests that — even if all the rules were followed — a number of cases may have been missed simply for a lack of testing.

Laura says that just a couple days before his stroke, he had told her over a video call that one of his five housemates had been taken away for isolation because he had COVID-19. And she agrees that Eduardo and other employees refused to get tested. But that's because, as she recalls, they were told it would cost $200 to get a test. Eduardo was asymptomatic until his stroke, so he decided against it.

"Anytime he asked to see a doctor, he would be charged," she says. "So he never got tested."

When asked about this, Ryf acknowledged that some employees were charged fees by a medical provider before getting tested, but the company says it later "sought and achieved reversal of these fees."

Carmen Hargis-Villanueva, an attorney with Northwest Justice Project representing Eduardo, says the lack of testing shouldn't matter too much to his claim. Because he worked long hours during the day, and he lived in employer-provided housing, it's more likely than not that he contracted COVID-19 at work, she says.

In that case, it's the responsibility of companies like Washington Fruit to help take care of Eduardo and his family as he recovers from an injury, she says. Under the state's workers compensation law, injured workers should receive time-loss payments as they recover from injury along with coverage for medical expenses. Hargis-Villanueva estimates Eduardo's medical bills are somewhere in the hundreds of thousands of dollars.

Labor & Industries either handles these claims directly or — as in Eduardo's case — has oversight of claims if a company is self-insured. The state generally allows workers compensation claims for COVID-19 if a worker's job is high risk and there's a documented or probable work-related exposure. A majority of COVID-19 claims have been filed by health care workers or first responders, and more than 80 percent of those have been allowed, according to state officials.

In Eduardo's case, Labor & Industries told Washington Fruit — and their insurer, Eberle Vivian — that his claim filed on Dec. 15 was allowed. That should cover his medical treatment and payments for time-loss benefits under the workers compensation law, Hargis-Villanueva says.

So why hasn't Eduardo seen any of it?

Ryf, in the written response to the Inlander, cites "procedural aspects" of the workers compensation program. She says Eduardo has been paid all of his "earned wages," along with sick leave and COVID paid time off through the state's new food-worker paid-leave program.

The company says its protest of Eduardo's workers compensation claim — a claim filed while Eduardo was half-paralyzed in a hospital and his wife couch-surfed in a strange city while trying to care for him — is "simply a matter of process."

When Laura video-called her husband on Oct. 11, she wasn't expecting him to be sick. Thus far, he had had no fever or cough or any other symptom.

Eduardo answered her call that day. But Laura knew something was wrong. He was incoherent, Laura recalls. Part of his mouth was drooping, and then he wasn't able to talk. Not knowing what else to do, she screamed.

She kept screaming. It was all she could do. She just hoped that somebody — anybody — could hear her voice, 2,500 miles away.

Eventually, somebody in Eduardo's living quarters heard Laura's screams and came to help. They called 911. He was taken to Othello Community Hospital with stroke symptoms and a fever, then transferred to Providence Sacred Heart in Spokane, where he had emergency surgery. Doctors tested him for COVID-19, which can elevate the risk of a stroke, even in young people. The first test came back negative, but another test came back positive, confirming the doctors' suspicion: The stroke was caused by the virus, according to medical records. It inflicted heavy damage, paralyzing the right side of his body, robbing him of his ability to speak or walk.

Laura flew to Spokane, but she still couldn't see her husband for weeks as he bounced between Providence Sacred Heart and St. Luke's Rehabilitation Center, undergoing multiple brain surgeries. When she finally did see him, 40 days after his stroke, the doctors weren't sure he was going to survive, she says.

Meanwhile, Laura had nowhere to stay and no money. Providence provided her with some housing for 12 days. A social worker from the hospital called Mesa, with Latinos en Spokane, and Mesa offered to let Laura stay at her home briefly.

Then, Nikki Lockwood, a Spokane Public Schools board member who's on the Latinos en Spokane email list, offered to take her into her own home. Lockwood says her own grandfather was a farmworker from Mexico who, after being kicked out of the U.S. a few times, eventually became a legal citizen. Plus, she had been preparing an extra room in her home in case someone needed help during the pandemic, so she was happy to host.

Eduardo was finally discharged from the hospital, just days before Christmas, and with nowhere to go. Latinos en Spokane, with help from Spokane Immigrant Rights Coalition, scraped together as much money as they could. They set Laura and Eduardo up in a hotel, got him a wheelchair and eventually helped them return home to Mexico.

Mesa says she's happy her organization and other community members could step up and help. But it shouldn't fall to volunteers to support families in these situations.

"He's not an undocumented person — he's paying taxes, coming in to work for many years. He provides; he feeds us," she says. "The least we can do is take care of him when he's going through an emergency."

When the Inlander interviewed Laura and Eduardo, they were back home, surrounded by their family. Eduardo couldn't talk, but he smiled and gave a "thumbs-up" in an expression of gratitude for all who have helped him. But he still needs regular treatment. He won't be able to work. And while he's slowly getting better, doctors say he may never be the same.

Laura, meanwhile, can't stop thinking about what would have happened if nobody heard her screaming, or if — when she arrived in Spokane with no money and no idea where to go — people hadn't helped her.

"I constantly ask myself that question," she says. ♦

The original print version of this article was headlined "Cast Out"