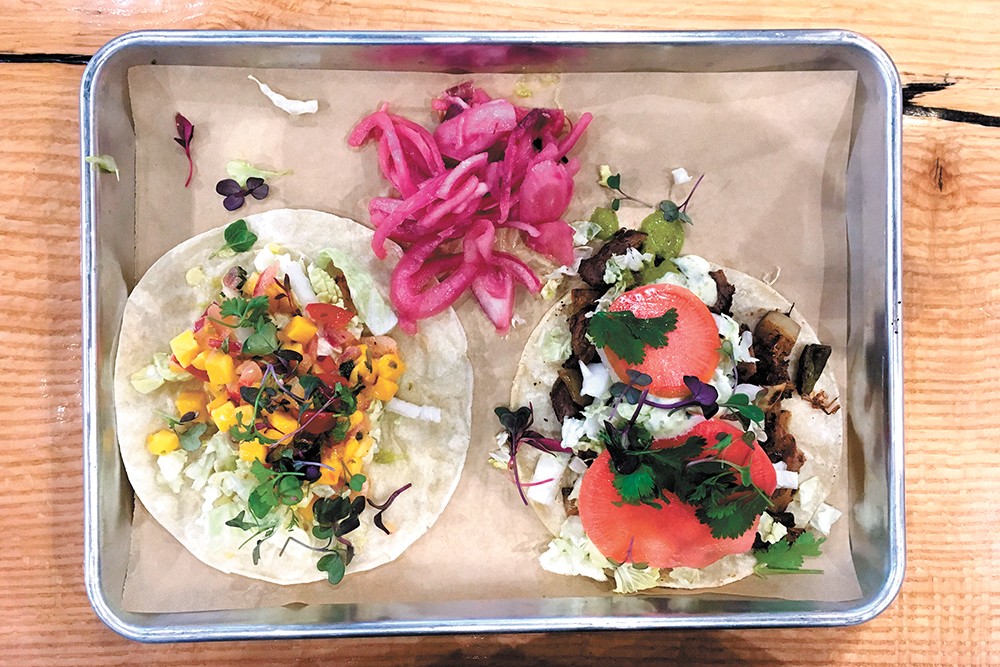 Carrie Scozzaro photo
Pick any two tacos and a side for $15.

In 2009, a young Rob Berger smiled through his pain

to cross the Coeur d'Alene Ironman finish line and run into the arms of his now wife and mother of their three children.

"I like to challenge myself, for sure," says Berger, who no longer runs marathons. Instead, he's running two businesses from his home in Nashville: Crafted Tap House + Kitchen, which opened in 2013, and Sonrisa Urban Taqueria, which recently replaced his Victory Sports Hall bar and grill next door to Crafted.

"In order to be successful, you have to focus on things that are going to make people smile, make people have fun, which is ultimately the experience," Berger says. "You have to leave an impression on them that will, you know, make them want to come back and remember what they experienced."

"Sonrisa" translates from Spanish to "smile," and that's just what the new taqueria intends to make its customers do. The décor was tweaked to be more eclectic and less sports bar, including a Vegas-like sign with the words "tacos" and "smile."

A new kitchen allows for a different menu than Crafted, with similarly unusual ingredient pairings, like the Asian-inspired five-spice duck confit taco, and clever names for its dishes. Sonrisa's house guacamole ($12), for example, becomes "Mama Said Guac You Out...with Queso," while the vegetarian taco with roasted baby carrot, caramelized onions and arugula becomes the "What's Up Regina George?," a reference to the movie Mean Girls.

Start with chilaquiles ($10) and one of several dozen rotating beers and ciders on tap. The two-fer tacos with one side ($15) allows diners to mix-and-match selections like the "Bobby Axelrod" (grilled chile-marinated steak), "#Yolo Swag" (chicken with bacon jam) and classic carnitas. Sides include roasted corn and Cotija cheese, tater tots with fried jalapenos and jicama-cucumber salad.

If he embarks on a third restaurant, Berger says it would likely be one located closer to home in Nashville, yet similar to Crafted and Sonrisa and with the same creative business philosophy that's helped him succeed so far.

"I couldn't cook my way out of a paper bag," he admits with a laugh. "I think most of the success I've had is because I've surrounded myself with people who are way better and smarter than me," he says. "I'm a little lucky, too." ♦