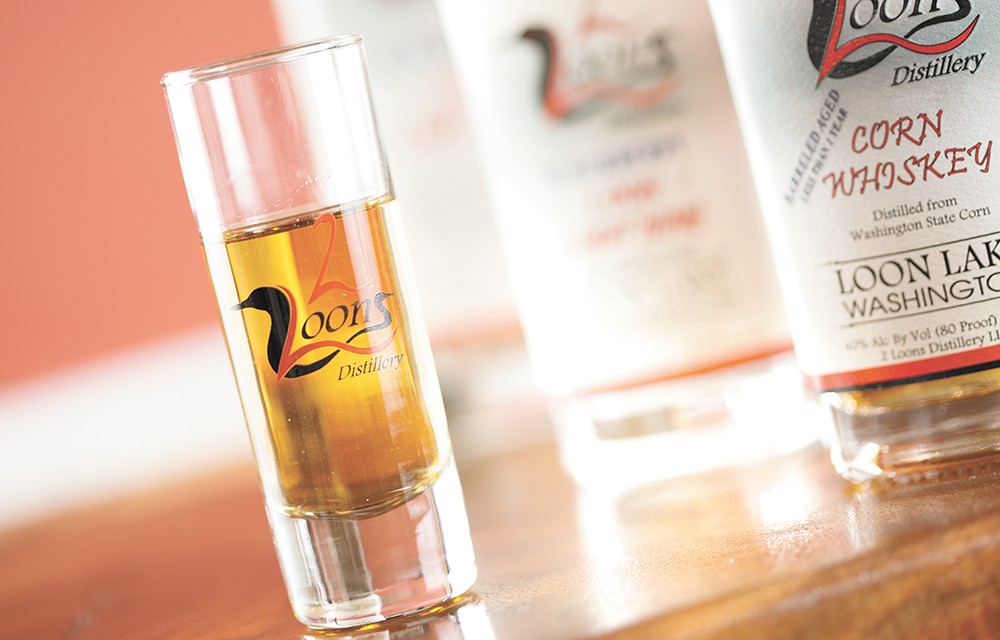 While anyone who's started a business can tell you

about the education earned from the process, Trisha and Greg Schwartz literally got schooled in their effort to create 2 Loons Distillery.

Inspired by a bottling party at Dry Fly Distilling a few years back, the couple started researching what it would take to open a distillery of their own. The soon-to-be empty-nesters were hoping to find a line of work for after their kids were at college that was more exciting than running their printing business and used-car lot in Loon Lake.

They found a short course on "how to open a distillery" at a western Washington community college and figured that after taking the class they would know to forge ahead, or cut their losses.

"At the end of the week, we just looked at each other and said, 'This is it,'" Trisha says.

Almost three years later, 2 Loons Distillery opened in late 2014 as just the second distillery in Stevens County. Vodka, unaged white corn whiskey and Blackberry Loon Lightning liquor are already available, and gin, bourbon and other spirits are in the pipeline. All their products are based on Washington corn, and the Schwartzes use regional and local products whenever possible.

While that community college class helped them get to where they are today, producing roughly 100 bottles each month, the Schwartzes still find themselves learning plenty. Sometimes they find doing the complete opposite of what they were taught is the best way to get things done.

The class told them to avoid making vodka, but instead they made it their first product. The class told them to think about marketing first, but Greg says they wanted to focus on crafting the product, and worry about marketing later. And while there was some prep in the course for how complicated the taxes can be, that learning curve has been incredibly steep, Trisha says. They teamed up with Paul Ziegman of Spokane's Tinbender Craft Distillery to share info as they both navigated the labyrinth of tax regulations and paperwork.

That willingness to share information is one of the things the Schwartzes saw at that first Dry Fly bottling party, and one of the most appealing aspects of joining the craft-distilling community.

"I'd say 99.9 percent of the people we've met are fantastic and more than willing to help," Greg says. "There doesn't seem to be any secrets."

2 Loons sits in a former pawn shop and gallery the couple owns, with windows that look out onto Highway 395. People traveling that road to play in area lakes or move between Spokane and Canada are going to see plenty of signage soon to let them know the small building is worth a stop.

If things go well this first year of operation, the Schwartzes picture eventually outgrowing the space. In the meantime, the couple of 23 years is learning lessons well beyond business.

"We're learning every day how to deal with each other, because we've never worked so close," Greg says. "It used to be, she went to work, and I'd go to work. Now, we're here."

is also a major factor in the ongoing development of 21 Window Distillery, a one-man operation in Spokane Valley that started producing spirits last year.

That one man is Michael Thompson, who started 21 Window as a side gig to his job flying for the Department of Homeland Security. Given his day job, when he's often on call, the production at 21 Window ebbs and flows according to what he can manage between work and spending time with his wife and child. He's also determined to avoid debt as he establishes his brand, a challenge for anyone starting a new business.

"As long as I can keep the lights on and my wife still loves me, we'll be OK," Thompson says, laughing.

Unlike 2 Loons, where the Schwartzes are trying to handle every aspect of the business, Thompson established a relationship with KBI Craft Spirit Distributors to work on getting his product into area bars and restaurants, and help him with everything from marketing to product development to picking the perfect label — inspired by the 21 windows on a Volkswagen bus that gave his business its name — that will stand out on a crowded bar shelf.

With some of the business aspects in others' hands, Thompson can focus on the craft that he came to love when he found himself overseas in the military.

"That's how all this got started," Thompson says. "I was deployed, and I'm not the biggest beer drinker. And I thought, 'How can I make booze?' Remember M*A*S*H? I wanted to play Hawkeye and make hooch when I was in a foreign country."

Given the limited resources overseas, Thompson researched different methods and came up with a simple way to get the taste he liked, and now he's converted that process to his four 50-gallon stills at 21 Window, where he uses Washington apples as the basis for his vodka, gin, smoked vodka (infused with cherrywood mesquite) and, soon, applejack.

"What I chose wasn't the cheapest thing, and in retrospect maybe I'd have chosen a different thing for my base," Thompson says, "but I wanted to use something that I could do by myself without having to do a lot of processing to it. That's the appeal."

That's true, but having a great-looking label doesn't hurt. ♦