An ensemble infidelity comedy that's neither too heart-warming nor too cynical. 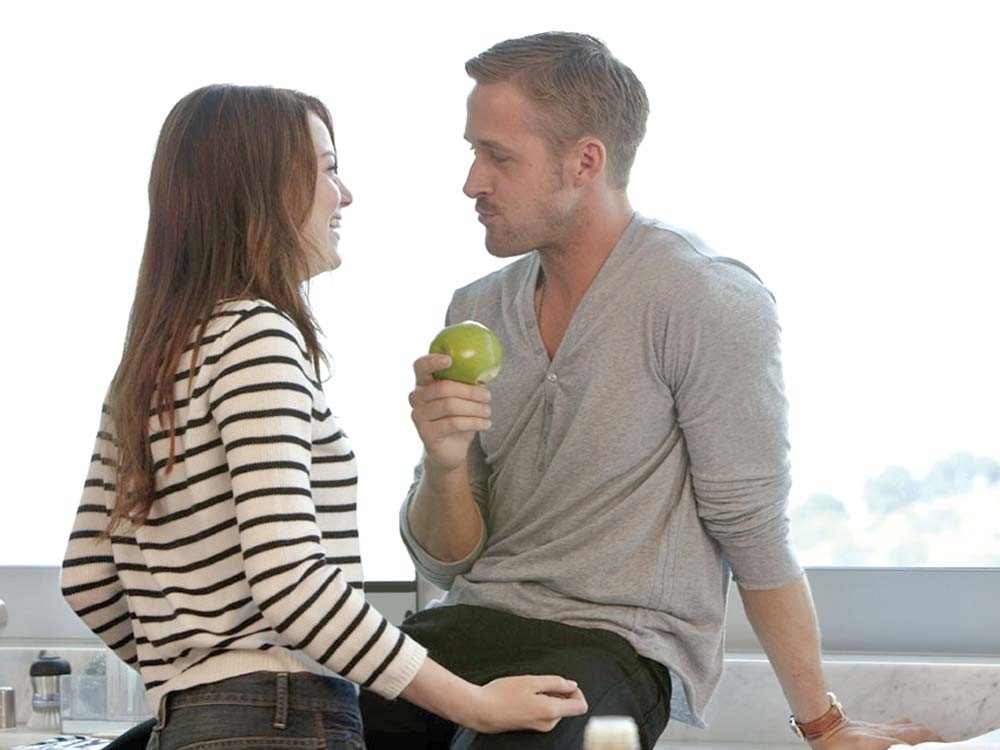 I find you and your apple hilarious.

Two years ago, the directing team of Glenn Ficarra and John Requa got gobs of laughs — some of them belly shaking, some of them squeamish — with their first film I Love You Phillip Morris. It was an interesting, offbeat comedy with a heart and an edge (but not too much of either) that almost no one saw.

More people are bound to see their sophomore effort, Crazy, Stupid, Love, which again explores the dynamics of relationships with a similarly slanted lens and off-kilter approach. While Phillip Morris centered on a lengthy love affair between two men in prison, Crazy, Stupid covers more traditional ground. Sort of.

Long-married Cal and Emily (Steve Carell, Julianne Moore) are suddenly faced with divorce when she admits she’s been unfaithful. Their 13-year-old son Robbie, (Jonah Bobo), openly admits his love for his 17-year-old babysitter, Jessica (Analeigh Tipton), who can barely control the crush she has on dad, Cal. Emily hasn’t a clue of what to do about her office fling with David (Kevin Bacon), while Cal, oblivious to the bashful babysitter’s mooning over him, finds a new drinking pal in Jacob (Ryan Gosling), a remarkably successful womanizer who decides to take newly single, sorry-forhimself Cal under his wing and make him a ladies’ man.

This is a film that immediately starts presenting funny and uncomfortable scenes between all sorts of different men and women, jumping back and forth between them to make it clear that relationships can be very messy. It at first appears to be about Jacob’s reinvention of Cal, from his wardrobe to his attitude, but via some sharply written banter, it soon becomes a mash-up of all sorts of people changing and trying to be happy while rolling with the punches.

Writer Dan Fogelman infuses the film with idiosyncratic asides that manage to fit right in. Nathaniel Hawthorne’s The Scarlet Letter takes a drubbing, for instance, while Dirty Dancing gets a celebratory tip of the hat.

Nice little surprises keep popping up throughout the film in the form of left-field story shifts or in revelations about characters. There are other surprises that aren’t so little.

In the first half, most of the concentration is on Cal and how he’s dealing with his new life, with regular peeks at how Robbie’s puppy love over Jessica is going. It’s not until the second half that Jacob and the initially underdeveloped and somewhat confusing “good girl” character, Hannah (Emma Stone), are given a lot more dimension.

Two brief complaints: There’s an overabundance of close-up shots of Stone, whose eyes are big enough without the camera being right up in them, and there’s a sequence near the end where one character gives a “big speech” and the dialogue feels too forced. Fortunately, the scene is brief, and most of the rest of the film’s words ring very true.

Ficarra and Requa know exactly how to stage a scene, how to get their actors to play them out, and how to follow it all up with another just-right moment.

Directors and actors absolutely nail a nervously funny scene in which newly brave Cal meets and attempts to pick up Kate (Marisa Tomei) in a bar, then chase it with an equally perfect “later that night” segue.

Crazy, Stupid, Love is funny and tender and wise and just the right amount of harsh.