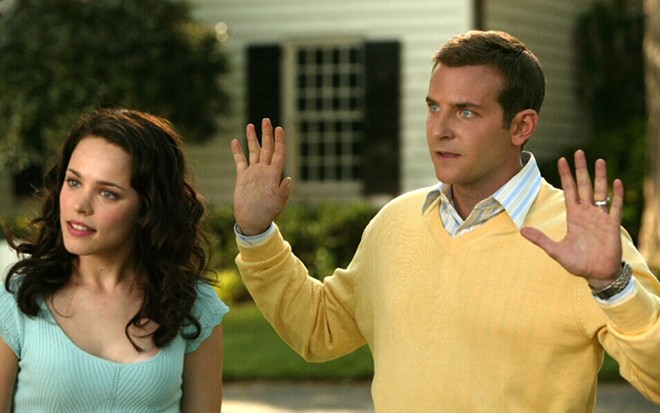 A couple inspired by the movie Wedding Crashers (pictured) got caught robbing a reception in Spokane Valley.

When WEDDING CRASHERS, the raunchy 2005 Owen Wilson and Vince Vaughn comedy, was released, the smartphone hadn't been invented. The selfie was far from ubiquitous. And the "selfie station" — where wedding attendees get their photos snapped before entering a wedding — was essentially unheard of.

The selfie station, ultimately, was the downfall of Joshua and Sierra Davies, authorities say. The couple, hungry and broke and having recently viewed Wedding Crashers, allegedly decided to sneak into a celebration of matrimony last week at the Mirabeau Park Hotel in Spokane Valley. But instead of just being satisfied with dancing, drinking and snacking at the taco bar, according to a Spokane County Sheriff's office press release, the couple got greedy. They decided to snatch a box of wedding cards and gifts on their way out.

It could have been the perfect crime, but the thieves made one crucial mistake. They got their pictures taken at the selfie station. The newlyweds combed through the photos from the wedding and found pictures of the uninvited guests. After uploading the photos to social media, the Spokane community was able to not only identify the suspects, but also where they were staying.

Following up on the tips, Spokane County Sheriff's Detective Jeff Thurman found the couple at the Montvale Hotel downtown, with what appeared to be some of the stolen gifts, as well as meth, heroin, and drug-dealing paraphernalia. After admitting what they did, the release says, the couple was booked into the Spokane County Jail on theft and controlled substance charges. (DANIEL WALTERS)

IT'S NOT GETTING BETTER

The amount of time that people sit in Washington state jails waiting for MENTAL HEALTH services has actually increased, despite orders from a U.S. District Court judge to fix the problem. This month, the state was ordered to pay nearly $3 million for continuing to defy Judge Marsha Pechman's orders. And now attorneys for Disability Rights Washington, which sued the Department of Social and Health Services in 2014, are asking her to double the fines.

Judge Pechman first imposed fines on the state Department of Social and Health Services in 2016 in connection with the lawsuit. Pechman imposed the fines — which are nearing $25 million — after the state initially failed to meet a deadline to reduce jail wait times by adding more beds and staff.

Attorneys for Disability Rights Washington argue that the state is ignoring recommendations of a court-appointed monitor and say the contempt fines should increase.

"In short, [DSHS] have the means and the solution needed to reach compliance but have failed to take all reasonable steps to comply," Emily Cooper, attorney for Disability Rights Washington, writes in a recently filed court document.

DSHS says it's restrained by budget appropriations and insufficient staffing, despite the nearly $80 million allotted from the state budget, according to court documents.

The soonest that DSHS expects to be able to comply with Pechman's ruling is 2020. A hearing on the increased fines will be held in September. (MITCH RYALS)