A high-profile retailer is eyeing a particular block of downtown Spokane; what that might mean for the Central City Line 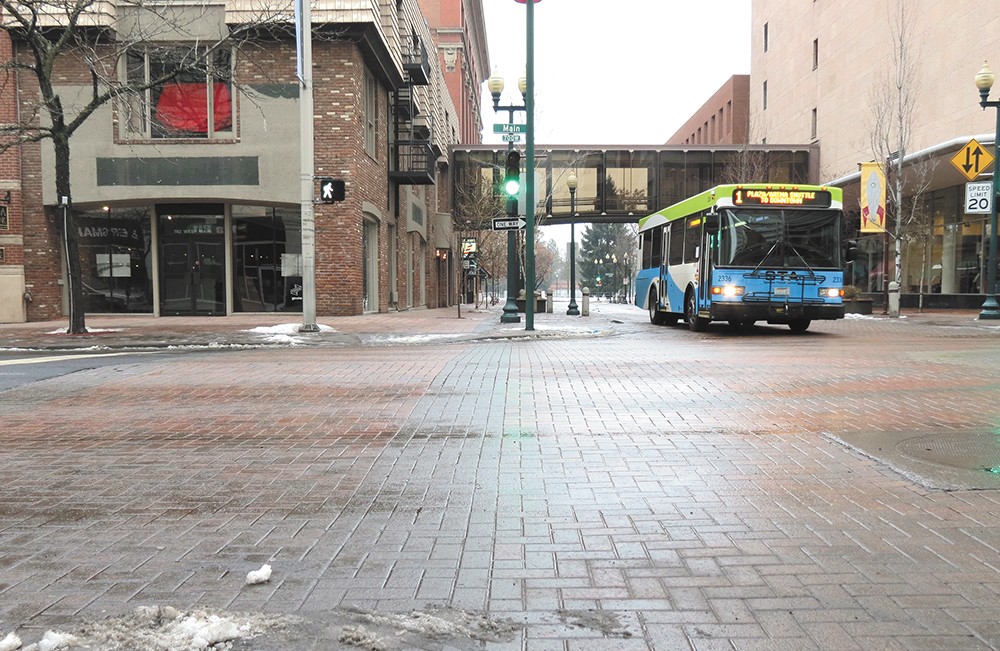 Jacob Fries
An mystery national retailer is eyeing the the Northwest corner of Wall and Main for a new location.

in downtown Spokane has set two groups on a potential collision course: In one lane, public transit and its touted Central City Line; in the other, a national retailer that business interests hope to lure to the area.

Downtown Spokane Partnership, a nonprofit that advocates on the behalf of downtown businesses, is courting the prospective retailer. (Sources won't name the company publicly.) To seal the deal, DSP is pushing the city to hand over 17 feet of the public right of way on Wall to the prospective business. The Spokane Transit Authority, meanwhile, is eyeing the street as a key part of its future Central City Line route.

E. Susan Meyer, CEO of the Spokane Transit Authority, says the bus serving the line will look and function much like a streetcar and will traverse a 3-mile route from Browne's Addition through downtown, up to Gonzaga University and over to Spokane Community College. That intersection on Wall, she says, is an important part of that route, which has been in the works since 2009, and if it were to become unavailable to buses, it would make planning the route more difficult.

"What we don't want to do is just eliminate Wall Street as an option for the Central City Line in any way," says Meyer.

Jan Quintrall, director of the city's Business and Developer Services division, wouldn't say who the potential retailer is, but noted that it's "high profile." She says that a business can apply to have the city vacate the right of way, which is ultimately approved by City Council.

Meyer says the 17 feet of space being requested for the prospective owner would still allow enough room for the bus serving the route to get through, and that DSP has been receptive to the concerns of the STA.

In the past, DSP, which did not respond to several requests for comment, has had plans for parts of Wall Street that haven't always aligned with the STA's goals. Spokane City Councilman Jon Snyder says that late last year, DSP President Mark Richard came before the city's planning and development committee with an idea to shut down Wall Street to all vehicles in order to attract more pedestrian traffic.

"That's kind of a non-starter, as far as I'm concerned," says Snyder of his reaction.

He says that downtown businesses rely on the street for delivery trucks. Snyder also wants to make sure that Wall Street is open to bus traffic, saying that "good bus service and good transit is so crucial to keeping downtown on an upward swing."

Business groups have clashed with the STA before, accusing the Plaza of being a magnet for loitering and unsavory activity that hurts the economic vitality of downtown. Over the summer, DSP, Greater Spokane Inc. and Visit Spokane all raised concerns about a proposed redesign of the STA Plaza. The trio of groups called for removing any non-transit-related features such as retail or meeting spaces. They also called for shrinking the interior of the plaza to deter loitering. In response to their concerns, the STA board voted in December to revise its plan for the Plaza.

Meyer says that the DSP is a significant stakeholder, and the STA wants to work with them.

"If we can accomplish some of what they want to accomplish and have the line open, that would be great," she says. "But it will require negotiation." ♦