Crystals Could Fuel Our Future

And four other lessons local universities taught us this year.

It looks like someone shattered a rainbow in Jamie Manson’s lab at Eastern Washington University.

A spectrum of smears and powdery spills mar the long sheets of paper covering the lab’s surfaces. Under one ventilation hood, 40 tiny flasks hold a zoo of crystals: There are tiny neon blue rods and bright green clusters. Some are clear, others red. There’s an olive-green rock. Still more are dark blue, pink and yellow. One, Manson says, looks like a purple sea urchin.

“A productive lab is a messy lab,” says Manson, a chemistry professor at the university, with a deep, rumbling voice and trim, graying goatee. “Show me a clean synthetic lab,” he dares.

But Manson isn’t destroying rainbows. He’s searching for something that could transform the world: unhindered electricity.

The materials we use to conduct electricity today strip away energy as it travels from, say, the Grand Coulee Dam to the light bulbs in your living room. It’s horribly inefficient — it’s estimated that we lose about 7 percent of our power due to the “resistance” in our power lines. What Manson is searching for is a highly stable superconductor, a material that would ferry electricity back and forth without losing any of it.

“There [would be] no resistance,” Manson explains. “So you have perfect electron flow from Point A to Point B. Energy transport becomes 100 percent.”

That’s why he’s growing crystals: to find that superconductor.

Deep within these tiny, artful objects are veins of electrons, which are capable of carrying electricity through the material. If the right crystal can be built, Manson contends, it could lead to a material that moves electricity far more efficiently and reliably than any in use today.

Manson’s crystal-building begins by linking organic (carbon-based) molecules together with metal ions. By altering the manner in which they’re connected — changing the size, shape and composition of the molecules between the ions — the crystal’s properties transform.

“It’s much like playing with LEGOs as a child,” he says. “You have LEGOs of different sizes and shapes. You snap them together to form different kinds of structures. We’re doing the same with molecules.”

He mixes copper or nickel ions, along with the appropriate organic molecular building blocks, into an aqueous solution and tweaks the conditions to build his crystals. He’ll subject the growing crystals to extremely low temperatures or very high pressure, or apply high magnetic fields.

“Certainly what we do is not haphazard or randomly throwing stuff together,” Manson says. “It really is by design. We’ve gotten pretty good at predicting what the resulting structures are going to be. And I’ve gotten to be fairly decent at being able to predict what the magnetic properties are going to be. I’m right about half the time, which is not bad. But it goes to show that I don’t know everything.”

Which gets to the heart of Manson’s research.

All known superconductors (which are too unstable to use outside a lab setting) are magnetic at higher temperatures. As they cool, they drop their magnetism and pick up superconductivity. The two properties cannot co-exist; they’re competing conditions. Because of this, scientists know there is a relationship between the two properties — they just don’t know what it is.

That relationship is what Manson is trying to define with his crystals. He calls it “the Holy Grail.”

But in fact, Manson’s work is less Holy Grail than Rosetta Stone: By defining the relationship between magnets (which we know a lot about) and superconductors (which we know very little about), understanding how to build a reliable, technologically useful superconductor will finally be realized.

From power lines to computers, Manson’s crystals could remake how our gadgets and machines work. Not only will the materials that transmit energy be made from superconductors in 20 years, Manson says, but working parts within machines will as well.

“It really could revolutionize how anything that requires energy works,” he says. Virtually every aspect of our lives would be changed, he adds.

Aside from the long-distance electric grids that would network across the nation without any transmission loss, superconductors could make our already tiny and powerful computers smaller and stronger.

“The idea of device miniaturization is also something that can be done,” says Manson. “As materials get better and we better understand how they perform and how they behave, you could gradually get those scales smaller and smaller and smaller. You could fit I don’t know how many libraries’ worth of data on a small thumb drive.”

Medical devices could become more compact and energy efficient, allowing for the most powerful diagnostic machinery to travel to the most destitute regions of the earth.

It’s not so far-fetched. Half a century ago, computers took up entire buildings. Nowadays, you’ve got one just as powerful in the pocket of your jeans. Even 20 years ago, the average household computer wasn’t as powerful as a smartphone.

“Absolutely,” Manson says. “Just think where we’ll be in another 20 years.”

But for now, Manson and his team of undergraduates tinker away in the shadows of the more prominent regional universities.

“Eastern is by and large ignored and forgotten about,” says Manson, who obtained his bachelor’s degree from EWU after graduating from Central Valley High School. “But it’s a very good university, and this department is very strong.”

Back in Manson’s lab, one of the four students assisting him this year is bent over her lab book. She’s in the process of making yet another crystal, one of the more than 50 that Manson’s lab has built this year.

She might know what color the crystal will turn out be. She could even predict its shape. But if this one is the Rosetta Stone, no one knows that. Not yet. 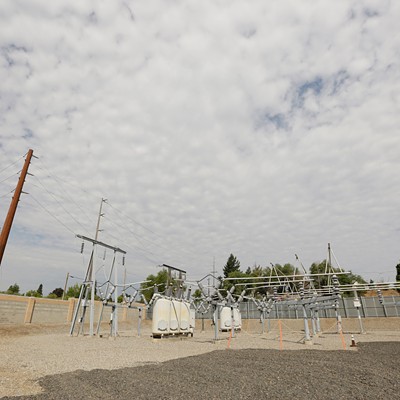 We Could Make Cancer Mortal

Computers Can Read Your Mind

Your Girlfriend Has Buyer's Remorse