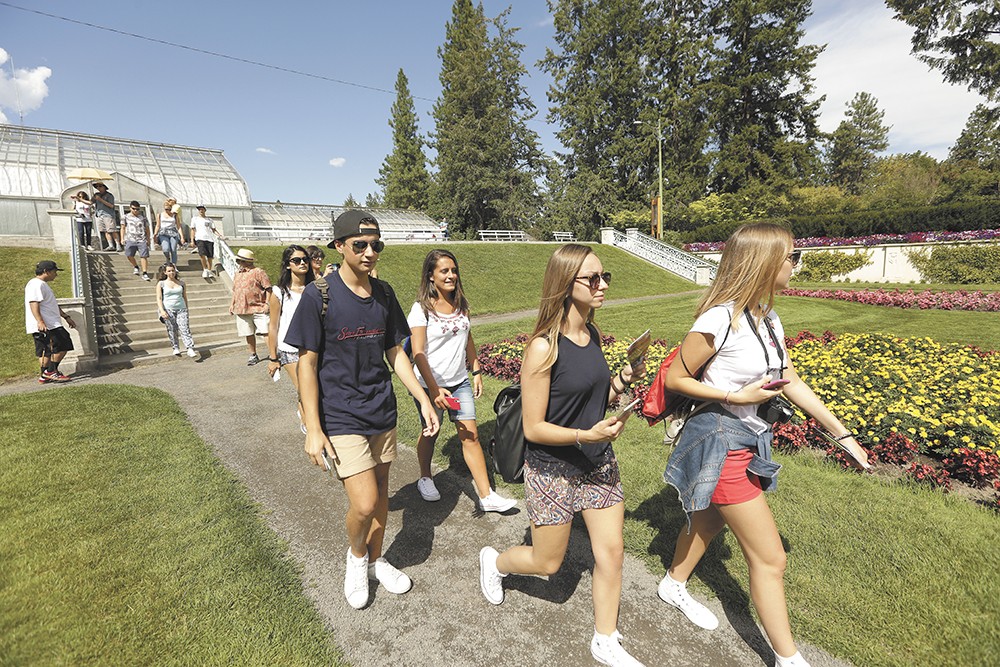 Young Kwak
During their 17-day stay in Spokane, high schoolers from Cagli, Italy, visited Manito Park and many other sites.

Gonzaga University's John Caputo greets the students shuffling into a small campus classroom after they've taken a mid-morning snack and smoke break in the shade. Taking their seats, they quietly chatter to each other in their native tongue.

Less than three days ago, the teenagers traveled 5,438 miles to Spokane from Cagli, a small city in the north of central Italy's Marche region, with about 12,000 people living in and around its borders. They're here for 17 days of cultural immersion in the American lifestyle, which includes honing their mastery of the English language and helping establish an amiable relationship between Spokane and their hometown, ahead of an official Sister City designation ceremony happening later this fall.

Following a brief lecture on the meaning of cultural dissonance, Caputo, a professor with Gonzaga's Master of Arts in Communications and Leadership Studies (COML) program, asks the students to share a moment since they've arrived when they weren't quite sure what was going on, or what was being said.

"When I arrived in the airport and they checked and asked me 'How are you' I just said 'Lorenzo,'" says one of the students, 18-year-old Lorenzo Rosmini.

"So you told them your name instead of how you feel," Caputo, smiling, clarifies to Lorenzo and the class, as the students giggle.

He then asks the group to share what has surprised them most so far about American culture. All but one are seeing the U.S. for the first time.

One girl volunteers that it's our big cars and wide roads. Others marvel at houses made of wood and without window shutters, and some say the "loo" is different than what they're used to at home. In Cagli (pronounced KAH-yi), a town established during medieval times atop another ancient city site, homes are made from stone, brick, stucco and cement. Windows don't have screens to keep the bugs out, and in the bathroom, American visitors are often confused by the presence of a bidet.

is staying in Spokane through Aug. 11. During their time here so far, they've tried the food at some popular local restaurants, gone to a Spokane Indians baseball game and spent a day exploring North Idaho. Each morning, they spend a few hours in the classroom working on their English and learning about American culture with Caputo.

The 10 students — seven girls and three boys between the ages of 16 and 18 — were selected out of a pool of more than 140 candidates to travel as cultural ambassadors to Spokane, explains Caputo, who was instrumental in setting up both this visit and the connection between Spokane and Cagli. For the past 14 years, Caputo has been organizing summer study abroad trips to Cagli for students in Gonzaga's COML program.

"The sister-city idea came from the people of Cagli," Caputo explains. "Over time they had developed this relationship with us, and they were interested in making it a more formal process."

In early October, a delegation from Cagli, including its mayor, travels to Spokane for an official Sister City designation ceremony. Spokane's American-Italian Club, celebrating its 50th anniversary this year, also will participate in the formal events to come.

"It's the first time we've had an Italian relationship, and we have a very vibrant and strong Italian community here, going back to the 19th century, so there are roots here," says Spokane Sister Cities Association president Mike Maehl.

Caputo says that even though it's much smaller and much older, Cagli is not too unlike our Lilac City. It's considered a market town, which means that all the surrounding towns come there for business and other needs, similar to Spokane serving as a hub of medical care for the Inland Northwest.

"It's surrounded by rivers, lakes and mountains, and people go there for hiking, camping and biking, very similar to what people do outdoors here in Spokane," he says.

Yet unlike Spokane, some of Cagli's oldest structures date back to the 13th century and older, including a Roman-era bridge from the second century BC that still stands on its outskirts. The city is filled with beautiful, ancient churches. Surrounding green mountains cradle Cagli and the land around it inside a valley of bucolic farmland.

"It's a picture-perfect, out-of-the-way place," Caputo summarizes. "It's hospitable to American students. It's a very historical, famous place, but small. It's really out of the tourist zone altogether."♦