Highlights from the fall season in the Inland Northwest

Comedian Demetri Martin is calling his latest cross-country jaunt the "Wandering Mind Tour," and Martin's wanderings are certainly the kind you want to follow. The Yale grad is super smart (obviously) and his deadpan demeanor and propensity for surreal stretches of logic make for some hilarious jokes, whether he's doing standup, writing books or penning essays for outlets like The New Yorker and Esquire. His latest standup special, The Overthinker, is streaming now on Netflix. Martin Woldson Theater at the Fox, $40, 7 pm (DAN NAILEN)

Oktoberfest is a heralded tradition in cities and towns around Washington. In Spokane, this year's event will feature dancing, eating, singing and, most importantly, celebration with German cheer. This year's festival will feature musicians like S-Bahn Band, Alpen Band and Hazelnauss "Das" Music. They will also have a copious amount of authentic German food and beer, along with various family activities, the Sugar Rush 5K and 10K, and the much-beloved wiener dog races. Consider an opportunity to immerse yourself in German culture and have a good time. Spokane Valley CenterPlace, $5-$30, Sept. 27 4-11 pm, Sept. 28 noon-11 pm, Sept. 29 11 am-5 pm (RILEY UTLEY)

Spokane's South Asia Cultural Association has a night of eye-opening, heart-pounding dance and drama in store as the group brings South Indian show Ardha Nareeshwaram to town for one night. The show revolves around a style of dance called Kuchipudi, a form that originated in 14th century as part of a Hindu tradition designed to invoke a divine experience for both dancers and audience members through a story about the Ganges River. In addition to the performance, an Indian vegetarian dinner will be available before the show. Bing Crosby Theater, $25.15, 6:30 pm (DN) 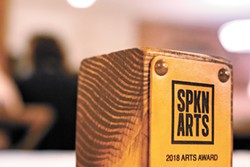 You can join a celebration of all the great things Spokane's art scene has to offer as the folks at Spokane Arts hosts its annual throwdown at the sparkly new Lucky You. Comedian Casey Strain will host the award show, with four individual artists and/or organizations being recognized for their "leadership, collaboration, imagination and inclusion." There will be music by Ray Badness and Shantell Jackson, interactive art on site, drinks and small bites, and the new Spokane poet laureate will be revealed as well. Consider it a chance to rub elbows with some of Spokane's most creative minds — pretty hard to resist, right? Lucky You Lounge, $30, 7:30 pm (DN)

Over the course of its increasingly popular 11 seasons (not to mention its many spin-offs), the reality competition juggernaut RuPaul's Drag Race has brought the art of drag to the mainstream and discovered many new stars. The ongoing Werq the World tour assembles a coterie of the show's performers, including fan favorites like Kim Chi and Detox, as well as past season winners Violet Chachki and Yvie Oddly. Outside of the ensemble numbers, the queens get their individual moments to showcase their talents for comedy, music, dance and, of course, sickening fashion. Martin Woldson Theater at the Fox, $55-$165, 8 pm (NATHAN WEINBENDER)

Office Space, Mike Judge's wry satire about the daily drudgery of pencil pushers, desk jockeys and clockwatchers, made hardly a peep when it landed in theaters in early 1999. But through its near constant rotation on Comedy Central, it developed a cult following, and now many of its jokes — The TPS report! Flare! The red stapler! — have become catchphrases and memes unto themselves. As the film turns 20, the Inlander will be screening it as part of our Suds & Cinema, which pairs classic movies with local breweries. Bring your own printer, and we'll supply the baseball bats. Bing Crosby Theater, $5, 7:30 pm (NW)

For some of us, the "Blue Collar Comedy Tour" was only good for one thing, and that was introducing Ron White to a much wider audience than the cigar-smoking, Scotch-swilling comic enjoyed previously. The Navy vet and proud Texan's jokes landed with far more style and thought than, say, those of tourmate Larry the Cable Guy (a low bar, I know), but the Blue Collar life helped White establish himself as a touring pro — one who has sold more than 10 million copies of his comedy albums. He put out a new special on Netflix last year called If You Quit Listening I'll Shut Up. Northern Quest Resort & Casino, $59-$89, 6 pm (sold out) and 9 pm (DN)

The hit Nickelodeon classic Double Dare is hitting the road and will be making a stop at the First Interstate Center for the Arts. Double Dare truly is fun for the whole family, being that the show aired when many parents were still kids and was revived recently for a younger generation. Join legendary host Marc Summers for an interactive and entertaining show that will have the whole family laughing and rooting for their favorite team as competitors navigate trivia questions, obstacle courses and, of course, plenty of slimy stunts. First Interstate Center for the Arts, $34.50-$64.50, 7:30 pm (RU)

Are you having snow withdrawals from not being able to make to the mountain in months? Have no fear because Warren Miller is here. Warren Miller's 70th film, Timeless, features the best skiers in the world tackling runs across the globe. Filmed in British Columbia, France, Austria, Switzerland, Colorado and Jackson Hole, Timeless features some of the best terrain the world. The cinematography of the Warren Miller flicks takes ski movies to an incredible level every year, due to the seven decades of filmmaking from this company. Filmgoers will not only see the film, but get access to lift ticket discounts, free swag and more. The Bing Crosby Theater, $21, 6 pm and 9 pm (RU) 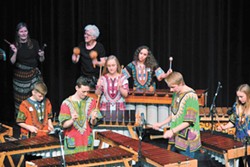 The Spokane Fall Folk Festival is a time for people to come together and celebrate traditional and ethnic art. The festival has been designed to support all kinds of regional folk musicians, and brings in groups that represent Celtic, bluegrass, blues, African, Asian, Middle Eastern cultures, and then some. With over 100 performers there truly is something for everyone, and this year they expect about 5,000 people to attend, joining up to celebrate culture through music, dance and more. Spokane Community College's Lair Student Center, free, Nov. 9, from 11 am-10 pm, and Nov. 10, from 11 am-5 pm (RU) 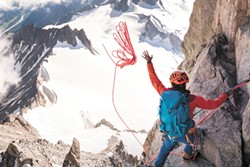 Every year the Banff World Tour brings an array of incredible outdoor-oriented films to town, featuring jaw-dropping scenery and incredible feats by kayakers, climbers, bikers, skiers and other outdoor enthusiasts. Screenings typically include 6-10 films, and you're always going to see something that you wouldn't believe if you hadn't seen it with your own eyes. The environment and how to protect it for future generations is an inevitable and welcome message that consistently comes through these screenings, too. Bing Crosby Theater, tickets TBA, Nov. 15-16 at 7 pm, Nov. 17 at 6 pm (DN)

Lance Burton has been performing magic for 31 years, making for an impressive career that's hard to match in the magic game. Burton's been called "a magician's magician" and a "patriarch of magic" He's performed in Las Vegas, on The Tonight Show, in front of the queen of England and had his own TV show. Now he is making his way to Eastern Washington to show off his incredible skills. Northern Quest Resort & Casino, $49-$79, 7:30 pm (RU)

SPOKANE SYMPHONY: TIM BURTON'S THE NIGHTMARE BEFORE CHRISTMAS IN CONCERT

Back when Tim Burton was writing a string of instant-classic, slightly surreal films like Beetlejuice, Edward Scissorhands and The Nightmare Before Christmas, they were all soundtracked by the distinct musical vision of former Oingo Boingo frontman Danny Elfman (you might know him better as the guy who wrote the theme song for The Simpsons). Elfman's twisted way with orchestral works pair perfectly with Burton's most creative endeavors, and there are few better examples than The Nightmare Before Christmas, a flick produced by Burton but directed by Henry Selick. Enjoy the movie while the Spokane Symphony tackles Elfman's memorable score live just below the screen. Martin Woldson Theater at the Fox, $20-$103, Nov. 23 at 8 pm and Nov. 24 at 3 pm (DN)

Sesame Street is coming out of our televisions and into the Spokane Arena this December to teach people of all ages the importance of believing in themselves. Follow Elmo and his friends on a journey filled with magic to discover the "power of yet." The show is filled with fan favorites: Big Bird, Cookie Monster, Grover, Rosita and Count von Count, among others. Like its televised version, this show will entertain the kids while also teaching them valuable lessons, so grab the family and spend a few hours with Elmo and friends. Spokane Arena, $22-$77, 2 pm and 6 pm (RU) ♦