Today, people are here for happy hour, some right after work, others just sipping away at retirement. Although there are happy hour specials, most take swigs out of their frosty Keystone Light tallboys. These, along with Busch, Busch Light and Natural Light cans, cost $2.50 daily at the bar, and they're the drink of choice in these parts.

"It used to be just farmers out here. No one thought of the term as bad," says bartender Marlee Weinstock of the venue's name.

She says the locals joke that the strip-mall spot next door, Boomers Classic Rock Bar & Grill, should change its name to Pull Out. But Weinstock, who smiles easily in her "Mullets Rock" T-shirt, says she thinks people should just get over the name business.

"It's just a hole-in-the-wall bar," Bennett says. "This is a place where everyone feels welcome."

Currently, Weinstock's whipping up a fresh batch of $1.50 Jell-O shots, which she says is a hard-hitting half-booze, half-gelatin recipe. On staff for nearly three years, Weinstock is just one of the bartenders who keeps this place clean and comfortable. Plus, the beer here is the coldest in Spokane, she says. They keep the freezer at 33 degrees, and the beers go down icy smooth.

Don Lenhardt is here, drinking his one cold beer of the day.

Four nights a week, there's karaoke, which brings in its own type of regular crowds — "a nightclub atmosphere," says Lenhardt of the Friday and Saturday night patrons. Happy hour is an older group of about a dozen, one that's already seen a lot of life.

On one side of the 3,000-square-foot bar, a group discusses the presidential election, using language straight out of an episode of HBO's Deadwood. One loud man expresses his love for Condoleezza Rice, but in the next second labels George W. the worst president in history.

"If I could vote, I'd put your name on the upcoming ballot," his slightly tipsy friend tells him.

Lucky, as he's known here, wearing blue jean pants, shirt and jacket, takes to the jukebox to offer some background noise. His taste is surprising, moving from the Gorillaz' "Clint Eastwood" to AC/DC's "Dirty Deeds Done Dirt Cheap" and beyond. 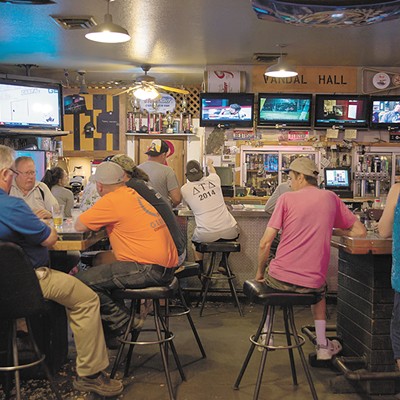