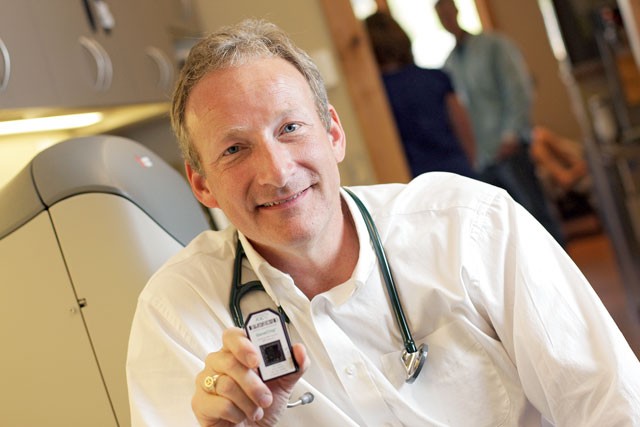 Cancer may have been around a long time, but nothing is outdated here. Shiny new iMacs glisten on every desk; straight-lined architecture and quiet dribbling fountains fill the waiting room. Behind the desk, italicized letters affixed to the wall spell out, “Evergreen Hematology and Oncology. The Center of Science and Hope.” A small, bright green leaf hovers above the letter “v.”

It’s not the center of running tests or diagnosing diseases or sending patients home with the month’s most popular pill. This is the home of cutting-edge, fast-evolving technology: personalized treatment.

Dr. Stephen Anthony, a molecular hematologist and ocologist who opened the practice in September 2008, doesn’t hesitate to admit his profession is flawed. Some cancer treatments have a success rate somewhere between 30 and 40 percent, he says, and when a patient hasn’t benefited from the first and second rounds of therapy, the chances of success become even smaller.

“So you can either be a therapeutic nihilist and say, ‘Don’t bother with chemo because it doesn’t work [in some patients],’ or say, ‘Use this because in other patients this works.’ But the question is, ‘How can we personalize treatment?’” he says.

Anthony’s research tries to find answers to that question. He has spent years focused on the molecular profiling of cancerous tumors — studying the genes of each tumor’s cells to find out what is driving them — and personalizing treatment based on each profile. The profiling is usually performed once cancer patients have faced one or two lines of standard treatment, and is aimed at finding out why the tumor is not responding to those therapies — what is allowing the cancer cells to defy treatment and continue to survive?

The answers to these questions could put doctors one step closer to offering individualized, tumor-specific cancer treatment. Much of that treatment could come in the form of new pharmaceuticals, so Anthony and his team at Evergreen also work on Phase I drug development, testing drugs that are eight to nine years away from FDA approval.

“We have new technology and new drugs, and we want to marry those two together,” he says.In a study soon to be published in the Journal of Clinical Oncology, Anthony and a team of other doctors took tumor samples from 120 cancer patients — who had found no help in the first stages of treatment — and sent the samples to a lab for genetic analysis. The reports they received allowed them to see what was feeding each tumor and to prescribe specifically targeted drugs, benefiting about 40 percent of the patients, he says.

Few commercial health centers across the country offer this analysis as part of in-clinic treatment, Anthony says. Instead, it is generally confined to laboratories and academia, though it is not considered experimental. Practice manager Yolanda Jaeger says most, but not all, insurance providers cover molecular profiling. For patients who don’t have coverage, she says the labs the perform the profiling are usually “willing to work with us and give some financial assistance to the patients.”

Most of Anthony’s patients are more than willing to see what these investigatory treatments have to offer, Anthony says. “People have come here when they were told there was nothing left that could be done, and this has worked.”

Cecil Boyce was one of those people. Diagnosed in early 2009 with liver cancer, Boyce underwent chemotherapy for several months only to find that his tumor had grown instead of shrunk. Last winter, doctors injected chemotherapy drugs directly into the artery that supplies blood to the tumor, but his condition again failed to improve.

“I don’t want to say we had given up hope,” says Boyce’s wife, Sharlene. “However, when you’ve been through two treatments and haven’t had any success, we had absolutely no qualms about going to [Anthony].”

This spring, the Boyces visited Evergreen for the first time. Anthony retrieved Cecil’s biopsy from his first stages of treatment and studied it to choose the best, most personal treatment, says Sharlene — and it’s working.

“After this treatment, the tumor has shrunk for the first time. We are absolutely thrilled,” she says. “It is working and we’re hopeful. There is so much progress being made that wasn’t around five years ago, and that’s very promising.”

But Anthony acknowledges the technology is constantly changing and has not worked for every patient. He says the ultimate goal is to use small samples, do molecular profiling in real time and offer personalized treatment to improve the quality of life for cancer patients.

“We’re not just an assembly line. We want to give customized care,” he says. “If we can understand cancer at genetic levels, I think we can find cures for more cancers.”